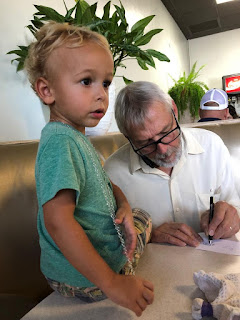 Today for lunch we went to a nice little Mediterranean place. I guess that's what you'd call it. August's grilled cheese was made on pita bread. So, yeah. Right? Mr. Moon joined us as the credit union he's got an office in now is right across the road and of course August wanted him to draw pictures. This is now a ritual, a routine, but not a rut. I am quite surprised at how well Boppy can draw. I had no idea! Today he drew a tractor with a harrow and a farmer and a barn. I wish I'd kept the index card with the artwork on it. I've taken to putting index cards in my purse to make sure that there is always something to draw on in restaurants. Whenever I see or use an index card, I always think of my grandfather who would put a few index cards into his breast pocket every morning along with a mechanical pencil and he would make notes all day long. Now people use their phones for note-making but I still think that pen and paper are best for notes and for lists, too.
And speaking of lists- I had a short one with me when I went to Publix after lunch. I kept it out, as I do now, and crossed things off, as I also do now, and as I went I actually added things to it after I'd determined what I was going to cook tonight because trust me- no, I will not remember that I need dry roasted unsalted peanuts which are on aisle ten or something when I am in the produce section. That is a lot of store to walk through which takes a lot of time which is all it takes for me to completely forget shit.
I can literally forget to turn the porch ceiling fan off in the space of about five steps after reminding myself to do it.
Swear to god.
Things are getting dire.
So there I was, walking around Publix and checking things off my list and forgetting to check things off my list and adding things to my list and re-making a recipe in my head which required me to go back to the same place in the store I'd just been to five minutes before to return one thing and pick up another and if someone was watching me on the surveillance camera they must have been scratching their chin and wondering if they should call security to see if I was okay.

Which reminds me that August asked me today if I had a beard.

One would think that he might notice that I do not but then again, I don't look in the mirror very often.

But this led to a discussion about beards and why mostly men have them and women don't. This is not always true, trust me, thus the use of the word "mostly". This discussion involved hormones but it did not involve the use of the pronoun "they" but you can also trust me when I say that August will indeed meet people who do not identify as "he" or "she" and probably sooner rather than later in this family.
Anyway, I asked August if he was going to have a beard when he grows up and he said that yes, he was going to have one. I have no doubt that he will if he still wants one then but it sort of caught my heart a little, looking at that gorgeous child's beautiful little hairless, smooth, perfect-skinned chin and cheeks, thinking about some day a beard being there. About him being a man. Will he still have those incredible eyelashes?
Another question I asked him was, "Can I have your eyelashes?"
"No," he said. "They are tied on."
"You're right," I said. "And they look beautiful on you." 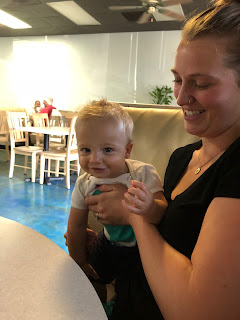 Levon is not yet concerned with things like beards or eyelashes or drawings on index cards. He is far more interested in where he can climb and how he can escape the clutches of his mama or his Mer. That boy wants to go. Up, mostly. He is not his brother. He is himself. At the age he is now, August would sit and listen to books for a long time but Levon is done completely after one page at which point he wants to climb over the back of the couch. He is like his brother, however, in his complete disinterest in being kissed. He gets a look on his face when I kiss him like, "Really? Why? Please respect my personal space."

Well, I suppose I better go in and cook that supper that it took me three hours to shop for. I'm making a Publix recipe called something like "Spicy Peanut Chicken With Zoodles" but I'm not using any zoodles. Or chicken. Tofu and broccoli. The spicy peanut sauce will be in evidence, though. A recipe with peanut butter and chili sauce?
Oh hell yes!
So. Time to go grate some ginger and mush up some garlic and all of that stuff.
I will also be cooking some real goddam noodles. The day I start spiralizing is the day I start bedazzling my lady parts which is to say- cold day in hell, honey. Pigs will be flying.