One Day In History For One Woman On Earth 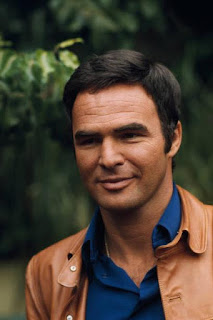 Now isn't that a beautiful human being? Some people you look at and you just have to be glad they're on the planet. Like a magnificent tree or a majestic mountain or a perfect, clear running river. Just something that came about through eons of growth and change and sometimes just plain old genetics.
That was Burt.
I know he was old enough to die and I know he had a life filled with all of the things humans lust after, want, work for, pray for, and also hope never to experience.
But he was special. To me, at least, and to a lot of people. I always thought he was vastly underrated as an actor and director. He made it look too damn easy. Some actors get up there and just act their asses off and you can see 'em act and you're sort of in awe because, GODDAM! THAT'S ACTING! And then some actors, the best ones in my opinion, get up there and you forget they're "up there" because you're inside whatever's going on and you never, ever catch that person "acting." They are just living it. And you believe it.
And to me, that was Burt.
And Lord, was he funny? Yes. I think he had some of the best comic timing of anyone ever to grace a stage. Could he do drama?
Why am I even asking?
Could he take a piece of shit script and turn it into a classic with a wink and a nod and no stunt double?
You bet.
Was he sexy? To me, he seemed like the best kind of sexy. Of course he was gorgeous and he had a body that was big enough to hold on to and a grin that seemed to promise more fun in bed than the law allowed.
Yeah. I was a fan. And he was a Florida boy and he had big huge issues with his father and he was in a lot of pain from the punishment his body took playing football and doing stunts and he'd made some mistakes both in his career and his love life but he was Burt Reynolds and sure as hell nobody else was.
And never will be again.

So that happened today and it seems like the government is blowing up what with anonymous Op-Eds and released emails and Brett Kavanaugh and his hearings which are getting more and more contentious and of course there's the new book by Bob Woodward.
Are the walls starting to close in?
Fuck if I know. I know we're off the rails so bad that the train's in Nebraska and the track's in Florida.
Here's a piece from the New Yorker that I read online today that says what I'm thinking about the NYT's Op-Ed.
Basically what it's saying is that no, whoever wrote the Op-Ed is not a hero but is, in all actuality, part of an unelected group of people who are running the United States of America and if that's not treason, I don't know what is. Just speak the truth and fear no man, you motherfucker! Hell, Trump's not even a man. He's a...I don't know what he is.
It does appear that the Democrats are starting to find the balls and spines they've misplaced somewhere. Maybe some of the Republicans actually will too. I honestly think that if the first few brave and truly moral of them cross the line from blind obedience and support to true sanity and desire to preserve our democracy that others will follow.
You can call me a dreamer.

Meanwhile, back here at the farmette I had a great time with Jessie and August and Levon today. A while back August saw a picture of the cookies I'd made for his Boppy when he went gator hunting and he'd said, "Can you make me some of those cookies?"
And so today I did. Mr. Moon is off to Georgia to his hunting camp to do something with a food plot and a tractor and you know that I'm convinced that if I don't send food with him he will die of starvation. So...
Cookies for both Big and Little Boppy. 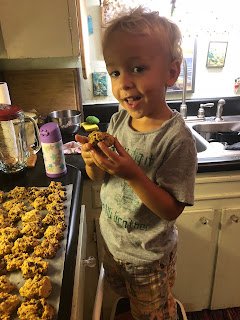 Levon discovered the toy piano that every one of my children and grandchildren has loved. 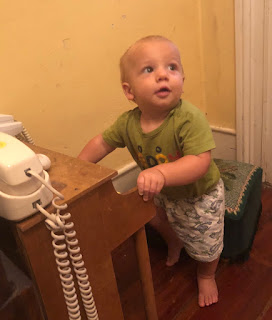 Little Dude is starting to stand up without holding on to anything.
He is also getting very good at climbing the stairs. 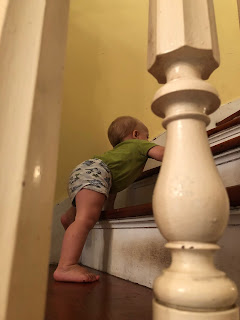 And yes, his mama was right behind him.

So we had all of the usual fun. Horse riding, asking the question "why," story-telling, porch swinging, porch rocking, 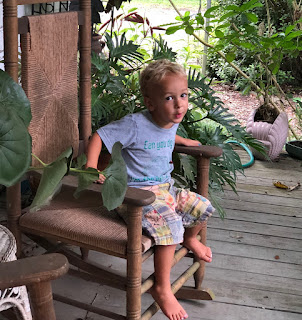 getting really, really dirty, and reading lots of books.
At one point in the book reading, August told me that he couldn't listen right then. That he was "distracted."
Yeah. He'll be three at the end of the month.
He also asked me, "Mer, why you so old?"
"Because I've lived a lot of years," I told him. "And that is very cool."
We had a discussion about age. About how he's going to be three soon.
"Are you three?" he asked me.
"I'm sixty-four," I said.
I might as well have said that I was a million.
Well. He'll figure it out.
Levon fell asleep on my bosom as I rocked him in the swing and I thought about how I've rocked all of my grandbabies to sleep in that swing. What can be sweeter than to feel a baby's weight begin to relax and become heavy with sleep as we hold them?
Not much.

I found out today that a very, very old friend of mine has cancer and it reminded me once again that we never know and that we just have to love on each other as much as we can while we can.
I sent my husband off with leftover chicken and dumplings and a huge bag of cookies and I said, "I love you. Please be careful."

We can be so careful, we can be so loved and still, not one of us is immortal, no matter what we think.

So. Again. Be kind. Love.
Try to make it as sweet and heavenly as we can while we're here on earth because that may very well be all there is. It is, at the very least, all that we know for sure there is and I believe in that.
With all of my heart, I do.