A Boy Is Three! 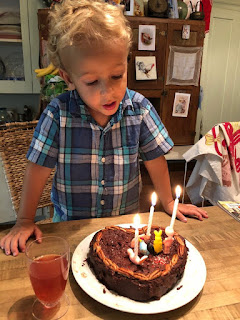 And today it's August's birthday. Yes sir and yes m'am, the Little Boppy is three years old today and spending the night with us. His parents are going to a wedding and so it's convenient that he be here, plus there's nothing in the world that would make him happier. As we speak he's sitting with Big Boppy in the Glen Den, cuddled up in Boppy's Chair and watching football. His bed is already made up in our room and life is good.

I know that the amount of cakeage we've had around here in the past week is ridiculous but I couldn't not make the child a small cake for him to blow candles out on so I dug out the little heart cake tin and made a miniature chocolate cake and he was so happy about that. He got to decorate this one too. Mr. Moon and I sang him a horrible rendition of Happy Birthday but he seemed fine with it, mostly just wanting to get it over with so that he could blow out those candles and EAT CAKE which he has not tired of in the least. 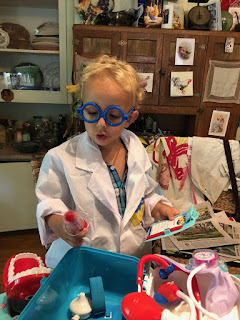 He'd wanted a doctor kit and so I got him some crazy thing off Amazon that has doctor tools, dentist tools, and optometrist tools. And, as you can see, a white coat and a pair of very impressive glasses. It has a clipboard for notes, a name-tag, a set of teeth, an emesis basin, and instruments for all sorts of procedures and treatments. He is delighted.
"What this for?"
"What this for?"
"What this for?"
There were a few things that I didn't even recognize. They probably hadn't invented them when I went to nursing school.

So that's all been good and of course he got on the tractor with his grandfather. 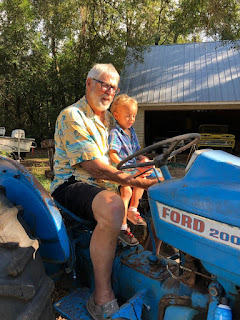 Mr. Moon can get the old thing to turn over but that's it. August asked to take a ride but Boppy had to tell him that it wouldn't go anywhere.
"Let's 'tend," said the boy, and so they did. They pretended to ride all over the place and I'm sure they had fun.

So that's what's happening here right now. It's still so fucking hot I can't stand it and it doesn't look like anything's going to change for at least a week. It looked, smelled, and sounded like we might get some rain just a few minutes ago but it passed us by, leaving us panting. This is the kind of weather that drives dogs to dig a cave in the cool dirt under the porch and settle themselves into it all day long and if I didn't have air conditioning, I'd probably do the same. 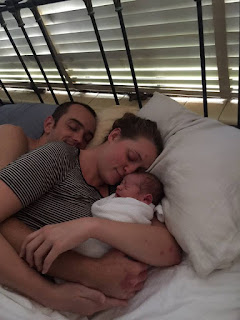 Remember this?
Me too.
Sigh. The sweetest day.

I guess I'll go fry some grouper for that infant and his grandfather.

Life just keeps on moving on and babies just keep on growing and that's the way it is.
Can't stop it, can't slow it down, can't change it.
But you sure can feed it.