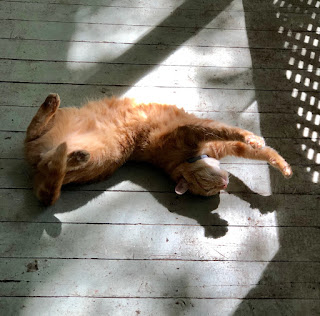 Maurice and I were lazy this morning, enjoying back porch time. That poor little girl cat. Jack has truly become a bit of a bully to her. He presents himself as the "sweet" cat. The "good" cat. The cat who will not use his claws or teeth to draw blood from you or your grandchild. Indeed, I am sure he thinks of himself as the noble cat. The protector cat. 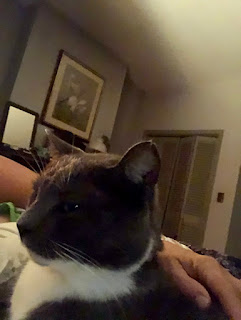 This was the picture I took last night to send to Mr. Moon to show him that Jack was fulfilling his role as my sleep guardian.
And Jack is all of those things. But all bets are off when it comes to Maurice whom, may I point out, WAS HERE FIRST!
He often lies on a chair right by the back door so that if Maurice tries to gain entrance to the house he can thwart her efforts. Poor thing, every time she does come through that door she hisses and spits in a valiant effort to announce the fact that she is NOT AFRAID AND WILL KILL THAT JACK CAT! Of course it's all bluff. Jack outweighs her by at least five pounds. I think he weighs as much as Levon and that's because when he's not lying on my bed or on the chair by the door he's lying by the food bowl so that if Maurice does come in, she won't get any of the Friskees. Or else he's actually eating out of said food bowl. This morning I rudely put him out so that Maurice could eat in peace and when I went to tend the chickens he was lounging on a chair by the kiddy pool. He did not seem upset in the least and let me give his head a scratch.

Anyway. Why am I discussing this?
I suppose because it's my life.

So when I finally decided to do something which might be interpreted as productive today, I went outside intending to work in the garden, getting it ready for the fall planting but instead I decided to do some front-yard trimming. I found the loppers that Mr. Moon had found on my old walking trail when he took a bike ride there once and with those and my faithful Rubber Maid cart, a pair of gloves, my phone with Mormon Stories on it, and my wireless earbuds firmly in place, I began on the Canary Island date palms.
Oh. Let me give you a before picture. I took this yesterday for no discernible reason. 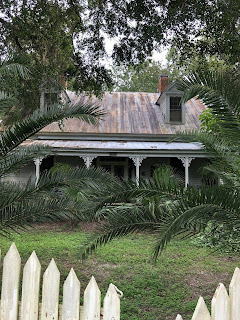 And I'm not sure there's a discernible reason that I'm showing you this because although the after picture does look much tidier, it's only because those few fronds in the front of the photo were cut and hauled away.
But in reality, I cut and hauled away a lot of those fronds and then I trimmed up the cabbage palms which stand sentinel to the front porch too. The found loppers are excellent even though they look old and well-used. They are, in fact, better than the ones we have that we bought and which Mr. Moon has up in Georgia with him. I was delighted with this fact. Then I moved on to a Sago palm which is in the area by the kitchen which should make it a kitchen garden but there's not one herb in it, and also a different palm by the side of the house which was sold as a potted house plant but which is extremely happy to be planted in real dirt. I have no idea what sort of palm it is except possibly a palm-you-can-buy-at-a-grocery-store palm. 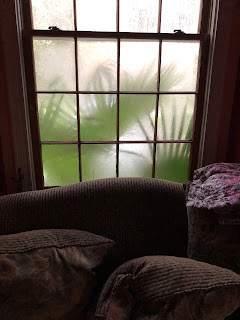 Here it is trying to get into the library so that it can grab a book and stretch out on the love couch to read it.

All of this involved hauling fronds (some of them with spikes that you could impale an adult human male on) to the burn pile. And then I started in on pulling up some of the hideous non-blooming things I used to think were wild gladiolas but which are not and I can't remember their name (Satan's Tongue?) in the area by the front porch. I also trimmed a few of the Sagos there and I got these pictures which I am under no illusions about as to their artistic or interesting nature. 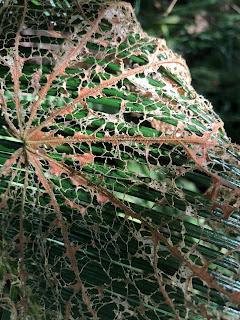 This is the skeletal remains of a Confederate Rose leaf which has come to rest on a Sago frond. 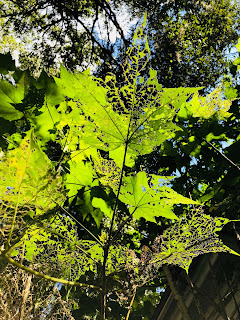 This is what the leaves above look like. Something must be eating them. I do not know what. But I know that soon they will be blooming their ridiculously bubble-gum pink, fluffy blossoms unless whatever is eating the leaves is eating the flower buds as well.
I hope not.

So after I'd hauled all of the damn stupid Satan's Tongue and more Sago fronds to the burn pile, I took this picture which as I said, really proves nothing. 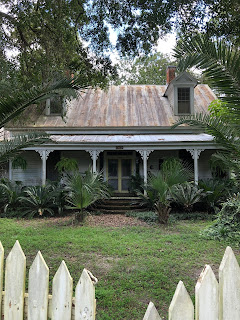 ,
However, the odds that someone walking down the sidewalk in front of my house has his or her eye stabbed out by a Canary Island date palm frond has been reduced immensely.

Then I came in the house and took a shower after which I cut out Maggie's dress. It's such a simple pattern that I definitely should be able to sew the whole thing tomorrow but as we all know, aging has not improved my sewing abilities at all.
I am ashamed to say that when I was looking at patterns I found one for a dress that I loved but it had a zipper and I said, "Nope!"
At the age of thirteen I could put in a zipper with style, skill, and grace but I just don't feel up to it now. The pattern also had a collar and that intimidated me as well. And princess seams.
I'm ashamed.
But not really.

And while I was cutting out the dress we had a lovely little rain and now everything is fresh and cool.
Well, relatively of course.

I went out to check for eggs and only found one. This means to me that the snake has been creeping about the hen house again although I haven't seen it and that the hens do not want to lay their eggs in those nests.
I do not blame them.
But where are they laying them?
Somewhere. That's for sure.
Sigh.

Ellen!  Your rose is thriving. 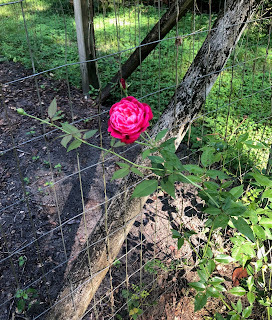 I guess that's all. Although I have diligently checked news sources every few hours today (and for the last year and a half) it would appear that D. Trump is still alive and has not resigned or been arrested.

Too bad that's not fake news.

And let me reassure you that everything you read here is not fake news either.

One more thing- have you noticed that I've really been trying to respond to all comments?
I hope so.