Jessie sent out a group text this morning apologizing for it being last-minute but inviting everyone to join her and Vergil and the kids down at Wakulla Springs. I told Mr. Moon about it and he reckoned that that might be fun and I thought so too so we packed up some sandwiches and put on our bathing costumes and grabbed some towels and hit the road for one of my very favorite places in Florida. Or, anywhere, for that matter. I've written about Wakulla Springs many times and how much I love it. I always take visitors there because it's just so dang Florida. The spring itself is the world's largest and deepest freshwater spring in the world, according to this webpage. Wikipedia has a very decent entry on the springs as well. It discusses the biology, the flow rate, the history, and the very serious problems the springs face right now due to humans.
Of course.

We had a perfectly wonderful time at the springs today. Mr. Moon and I were the only ones to join the Weatherfords as everyone else had previous plans made. Jessie and Vergil got there before we did and had set up camp in a lovely shaded spot right by the water near the diving tower. 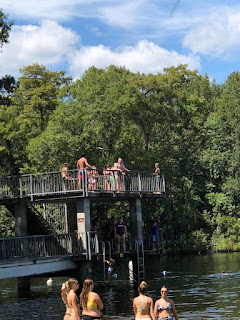 And no, I have never jumped off it and never will. Vergil jumped several times today though, to the great and vast delight of his son. As scary as that tower looks (and it's even more impressive when you're up there at the top), this is what the old tower looked like. 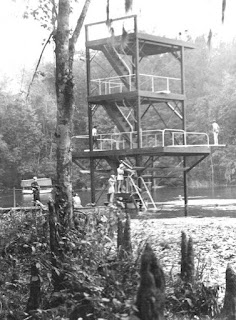 Oh hell no.
It was right beneath the tower where they found an entire mastodon skeleton back when the icy waters were far clearer than they are now.

Just magic in all regards. There are manatee and fish, and gators lounge on the opposite bank and there are the jungle boat rides which take you down the river and back. They show you where Creature From The Black Lagoon was filmed and also, some of Johnny Weissmuller's Tarzan movies.
(My first real crush. I still am very much in love with Johnny's Tarzan as many of you know.)
And then you float over the springhead from which millions of gallons of water pour forth daily. 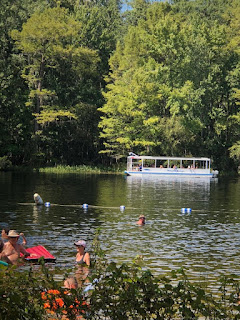 It is dizzying. It is magnificent. It is a miracle on this earth and when we get a year of good rain, part of my joy in it is knowing that the aquifer upon which we depend here is filling and then spilling from that deep, deep spring which has engendered and nurtured so much life for eons. 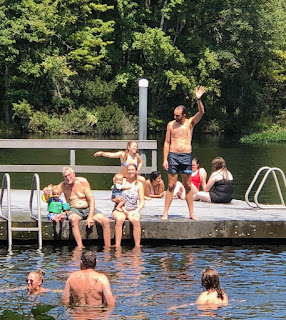 There's my sweet family, smiling and waving from the floating dock.
Every sort of person ends up at Wakulla Springs. Grannies like me and Grandpas like Mr. Moon and tattooed hipsters and tattooed rednecks (I felt very tattoo-deficient there today) and tourists from other countries and lots of young teenagers there to show off their bodies and blow-off some steam and talk some trash and young families with children and today there seemed to be a choir of some sort who stood in the water and sang under the bright blue sky as the holy water washed them clean.

We all swam and got cool and sat in the shade and ate our sandwiches and boiled peanuts and pretzels and grapes and tangerines and Levon showed off his new skills of hand-clapping and standing on his own. He doesn't realize he's doing this yet, but he is. After awhile August wanted ice cream and his parents told him that if he would poop in the potty, he could have some and he did and so everyone but me went up to the lodge and visited the snack bar there and got ice-cream cones. I stayed behind to watch our stuff and also, ice cream is not one of my vices.

So it was just a beautiful day and I'm grateful we got to go and hang out with the kids and watch the people and swim in the cold waters and relax in the shade of the cypress trees. 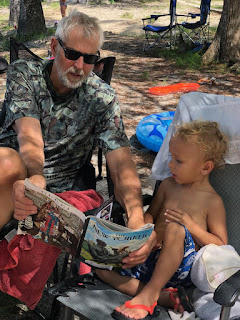 Okay. I admit. I made those two pose for that picture. But they were seriously interested in something in my New Yorker. I swear.

When we got home I cleaned out the hen house and Liberace got in one of the nest boxes in the clean straw and wallowed out a new nest. I wonder if the hens will pay attention and start laying there. I hope so. I only found two eggs today and I despair at the thought of all of the lovely eggs being laid somewhere secret and hidden.

I can wonder and marvel at some things which are secret and hidden such as the bones of ancient creatures at the bottom of the very deep and mysterious Wakulla Springs but some things deserve to be brought to light.
Like eggs, dammit!
Maybe if I promise them ice cream...
Yeah.
No.

Be well, y'all. I'll be back tomorrow.