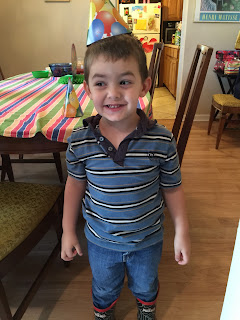 Yep. Dude is four now.
"Gibson. Will you pose for a birthday picture?"
"Sure! Cheeeese!"
Click.
"Thanks!"
"You're welcome!

It surely was a fine party. Gibson only melted down about four or five or six times. Hey man. It is so hard to be four. He's been waiting since Christmas for this party and he's wanted one specific toy that whole time. A Beomax. For a long time I thought he was saying, "Betamax" and figured it was one of those cool retro things.
Haha!
No. It's something that looks like this. 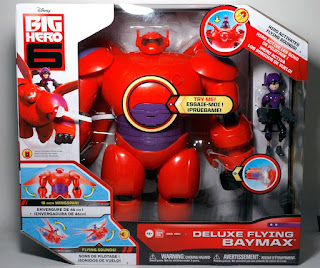 Yeah. That clears it right up.
Anyway, the poor child had to wait until everyone got there and we ate our delicious cook-out foods and then had the cake until he could open his presents and remembering what happened at Christmas when he opened his real, true desire present first and had no interest in opening any others after that, the Beomax was saved until last.
How cruel can life be?
He mostly hung in there though, that boy. He's tough.

But it was just a lot of fun. May and Michael were there, still basking in the glow of being so very recently wed, just back from their honeymoon in the incredibly romantic and charming St. Augustine, Florida. It's one of those places, St. Augustine is, where Floridians love to go and be tourists because it's just too good and too special to allow the alien tourists to have all the enjoyment. It's where I first got to know Lon and Lis because they used to live there and some of the best memories of my life come from visits with them and their community and I've taken my children to visit many times over the years and they, too, have some incredible memories of the oldest city in the United States.
Okay. That was a bit of a segue.
But. Here they are. May and Michael, wedded and happy to be so. 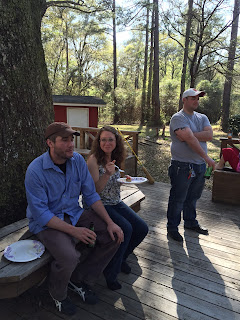 I don't think I've ever seen my May so happy. And you know what that means?
Her mama is mighty happy too.

Babies. It was a baby FEST!

I got to give Magnolia two bottles and change her diaper twice. Once a poopy diaper! Okay, don't you make fun of me. I just love my babies so much that even changing a poopy diaper is a joy to me because it's baby poop and because I can talk and sing just that much longer as I make the little bottom all clean and tidy again. And Maggie loves her changing table and she gave me huge smiles and gurgled along with my made-up songs in my croaky old lady voice. Oh, she is just a joy. Here's a picture of her daddy holding her. I think he believes she hung the moon. 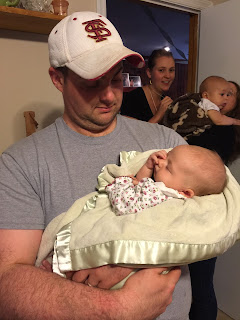 I won't say we all fought over holding her but I will say that she got held by a lot of people. She is just perfectly scrumptious. And in the background there, you can see May holding August. Boppy got to him first and carried him around for a long time. 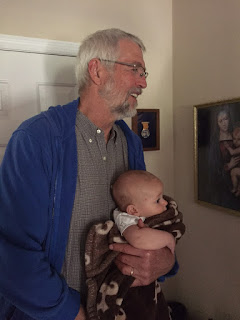 The two Glindens and Madonna and Child. 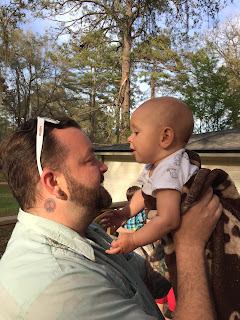 And Billy and Waylon. I think Waylon had a good time today. 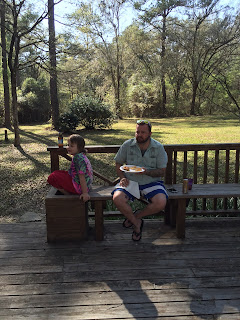 See what a beautiful day it was? A little cooler and clear as could be.

Here's Gibson blowing out the candles on his cake. The MAGIC candle. 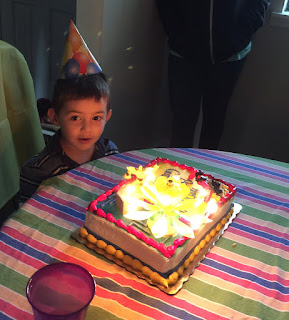 Which is like the best thing ever invented and if you want to see a video of what they look like, go HERE.
As you can see, Gibson was AMAZED!
And then we ate the cake which was delicious and then the presents were opened. 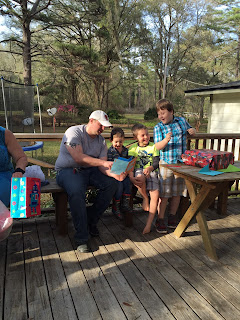 As you can see, Gibson had a present-opening posse. His daddy, his brother, and good friend Gabe. 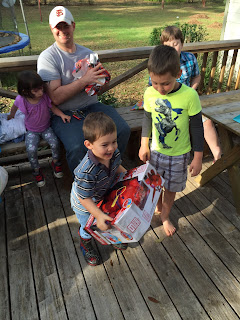 And that was the party. I'd like to post one more picture of Gibson. It's one of my favorites and Hank posted it on FB today. It's from last Halloween, I think, and he was Uncle Grandpa. 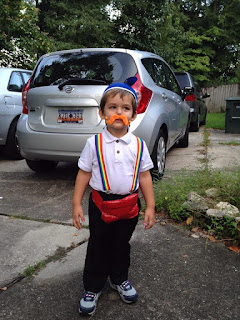 As Owen sometimes says, "It just never gets old."

And as my gift to all of you, I give you a song that Lon wrote and recorded a long time ago on his album, Streetlight Serenade, one of my favorite albums in the entire world. It's about St. Augustine and love and it is beautiful and you can hear Lis on it, singing with her true love, as she has been doing for almost forty years now.

Happy Spring, y'all. Gonna get down to 39 here tonight and I am happy about that.
A little bit of a lagniappe of cuddlin' weather.
Grab your sweetheart, your baby, your cranky old cat or your dog. Snuggle in.

And send a sweet thought to Gibson Monroe, sweetest little four-year old cuddly boy you could ever meet.