The Knees Are The First To Go 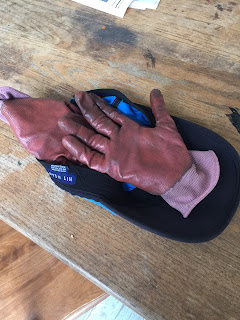 I think I may have overdone it today. I ended up doing a lot of weeding and I had wanted to rake and spread leaves on the parts I'd cleared but after I raked up about enough leaves to cover maybe one tenth of that area I said DONE, ENOUGH, NO MORE!
Besides, Mr. Moon had taken my yard cart for a job he needed to do in town and I was raking leaves onto a sheet, bundling it up and toting it to the garden and that is ridiculous and now I just want to cry because I'm so tired and I'm walking like a ninety-year old woman instead of a sixty-one year old woman and I'd love to take a shower and get in bed but it's only six-thirty in the evening and so forth.
And it got hot. It was over 80 in the shade of the porch and it was a lot hotter than that out in the garden in full sun and I know that if I don't get this stuff done now and the summer garden put in, it's not going to happen because I just can't do it anymore- work in the summer heat.
Oh well. Wah, wah, wah.
One of the hardest things about aging as far as I've observed, is the sad fact that you just can't do what you used to do. Okay, maybe I should be more specific. I can't do what I used to do. I know full well that there are octogenarians out there running marathons and teaching yoga and competing in weight-lifting competitions but I ain't one of 'em and seriously doubt I will be.

Tomorrow Lily is going to go back to work for just a few hours and will be bringing Gibson and Magnolia over for me to tend and then she's going to pick up Owen and bring him here and we're going to Monticello to see if there are any chicks I might want. The baby chick fever has sort of cooled down but I'd still like to get a few new ones. At least enough to give them the names that Owen has chosen already which are Mona Lisa, Violet, and Nicey, Jr. We shall see. And it will be nice to have Gibson and Maggie here. I hope I can keep up with Gibson while keeping his little sister happy. I probably can. I did it when Gibson was the baby and Owen was the big kid. I have to say though that it would all be a lot easier if I could just lactate at will. It's sort of crazy how my instinctive response to a fussy baby is still to put him or her on the tit which I do not do, I assure you. I read a thing online today about a woman who nursed her sister's baby and it was written in the spirit of, "Wow! Can you believe this?"
Good Lord. Anyway, I know how to make a bottle and Magnolia June shall be fed if she's hungry.

Anyway, that's the news tonight from Lloyd where we're having leftovers for supper. I truly need to clean out the refrigerator and some leftovers will just not lend themselves to making soup, believe it or not. Plus- part of what we'll be eating is soup made out of leftovers.