What is anxiety like? What does it feel like? We all know what it feels like to be anxious. Even VERY anxious. Anyone who's gotten up in front of people to talk or play an instrument or read a poem or a passage knows what anxiety can feel like. Anyone who's had a child with a high fever or had to take an important test or sat in an important job interview or gone on a first date knows what anxiety feels like.
It's a human emotion.
And- what does depression feel like?
We all know how that feels too. The man of your dreams tells you that it's not you, it's him. You didn't get the job. You made a C- on the test. Your child has to be on antibiotics for a week. Your poem got no response except for a lot of eyes looking at you like, "What the fuck was that?"

But. When those of us who suffer from anxiety and depression talk about those two things, we mean something entirely different. It's like comparing the flame of a birthday candle to the heat of a forest fire. Both fire, and yet...

I have only gotten the sort of anxiety which feels like a heart attack once or twice. Or, okay, maybe three or four times. I'm very lucky that way. The only time I truly felt my life was in danger was once when I had a panic attack driving on an interstate at night surrounded by semi's whooshing by and I just knew that I was going to pass out and crash any moment. And it was raining.
I have, however, had quite a few stretches of clinical depression, as we call it, which sometimes took months to years to actually recover from.

And when, some time ago, I had my first episode with the combined demon twins of anxiety and depression together, I had no idea what was happening. But I will tell you this- by the time I went to a doctor and asked for help, I was at the point where I could no longer live in the state I was in.

Because I grew up with a mother who threatened suicide innumerable times, I've never put that one out there. But I've been through things that have informed me as to how she must have felt. And we all deal with these things differently. She was more vocal about her depression whereas I tend to withdraw. And at the same time, I do talk about it, I write about it. I am trying to feel no shame about it, but that's hard because although we are told over and over that issues of mental health are as real as a broken leg or diabetes or a heart condition, there is still the feeling that if we just TRIED hard enough, we could get over it. 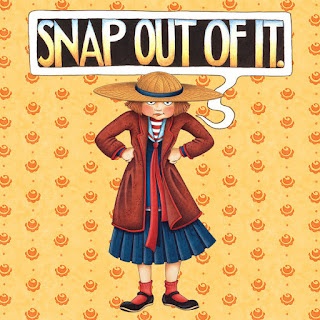 Mary Engelbreit has made a fortune on this belief although I'm sure that it was not her intention to make light of mental illness.
Do YOU have the coffee cup?

"Keep your chin up!" "Keep a gratitude journal!" "People have it so much worse than you do!" "What do you have to complain about?" "Do yoga." "Drink green tea!" "Don't eat sugar/drink caffeine/but do take magnesium/folic acid/St. John's Wort/calcium...blah, blah, blah!" "Exercise for two hours every day!" "Just decide to be happy!"

The first time those twin demons came to me with such force I was eating as clean as I've ever eaten, going to yoga three times a week, taking my walks, living in my dream house with my long-time love and my daughter was about to marry someone she really loved.

And yet, I slipped so far down into panic and despair and fear and sadness that death seemed like it might be a sweet release.
And if you don't think that I felt guilty about being so fucked up while having such a perfect life, then you don't know me.
This also coincided with menopause and with the last of my babies moving out of the house.
Looking back, I realize that these two things had a huge effect on me.

It's chemical, it's emotional, it's situational, it's...unexplainable.

Science really hasn't figured it out. Sometimes pills help. Sometimes, they don't. Sure, exercise is important and diet probably is too. Getting enough rest is always helpful. Can YOU sleep with adrenalin coursing through your bloodstream? Mindfulness probably helps and I'm sure that meditation does too. But when you're in the middle of it, you just want fucking relief.

I agree with Matt Haig in that love is probably the most important part of healing. And in that, I have been beyond lucky.

I did calm down today. It took me awhile to quit crying and when I did, I absolutely had to go lay down. I had no energy at all. We all find solace where we can and I found it in my bed and looking at pictures like this. 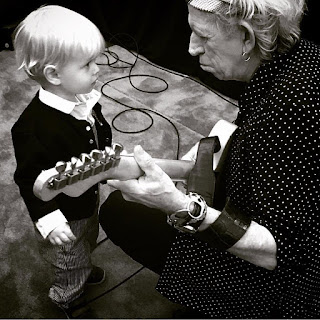 Go ahead and laugh if you want. Your spirit totem may be a wolf or an eagle or a hawk. Mine is that old man. That's Mick Jagger's grandson he's communing with. Or great-grandson. Who can keep up with these guys?

Whatever gets you through the night. Or the day.

I got up and I went to Publix and I bought food for Dog Island. I went by Lily's and made Maggie smile and sniffed her head so hard I'm surprised I didn't suck it up through my nostrils. I watched her nursing her mama. I touched her softness. I nibbled on her toes and fingers. I inhaled her and inhaled her. I told her mother how very, very proud I am of her.

And I just want to tell you that if you know what I'm talking about here and you're surviving and hanging in there, and finding whatever it takes for you to personally make it through the nights and days, then I admire and love the shit out of you. And if you'd like to tell me what it's like for you and what helps you, I'd be so grateful and humbled to hear what you have to say.
Thank you.