I Got Everything I Need, Right Here 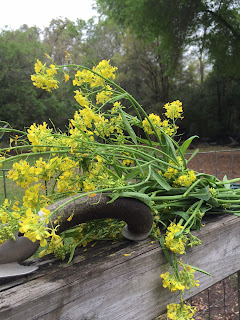 Ms. Jessie brought August over today for a visit which was good because I was having a hard time getting a damn thing done. I thought maybe we'd take a walk, Jessie and August and me, and stop by Ms. Liola's house to drop off some eggs and show her the baby and I decided to go pick her some greens before Jessie got here. While I was out there, I decided to just go ahead and pull the mustards, which I did, but I saved some of the pretty bolt blossoms. I gave a good many of the pulled mustards to the goats next door and they happily chomped their way through them. My garden buddy cat came to join me in my work. 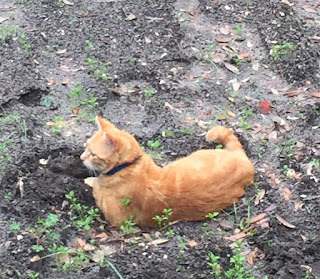 She persists in insisting that she has no interest in me or what I'm doing in that garden, but every time I go out there to work, she joins me so her story is getting a little thin.

August reminded me today of a little Buddhist monk. He is wearing those amber beads now which purport to have magical qualities for the baby and of course they do not. However...baby jewelry. The best. After they got here and he woke up and had a little nursey snack, we put him in the stroller and walked down Main Street to Ms. Liola's trailer and sure enough, she was there, and delighted to meet August and Jessie. Mostly August. I just love that woman. She has such a sweet, sweet soul. She flirted with my grandson and played peek-a-boo and he gave her smiles and she tickled his foot and he gave her more. We chatted for a bit and then I handed over the eggs and the greens and she must have said half a dozen times, "Now don't be a stranger," and then she said, "And bring back the baby!"We promised we would and then we walked on to the Fally Down House which is becoming more and more a part of the earth every day. 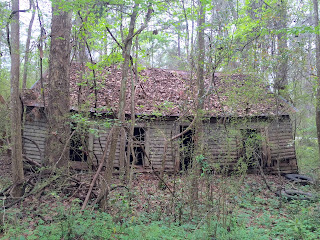 The right side, as you see from here, is truly on its way to complete collapse. Several trees have grown into the walls of the house, upsetting any integrity which is left by now. I couldn't get over there to take pictures because the house is surrounded by poison ivy which is growing this year like I've never seen before.
Still, I am taken by the dignity which the old place retains as it completes its life cycle, the wallpaper that some long-ago woman put up on her humble walls still clinging in places. I cannot help but wonder about all of the stories this cabin could tell, were it given a voice.

Today was a day for August to taste things. We picked a sour flower for him and he gummed it up good. He likes sour. 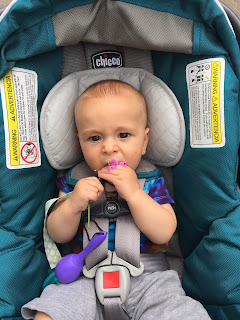 When we got home, we walked around the yard for a bit and I made Jessie pose in the spot where Vergil proposed marriage to her. 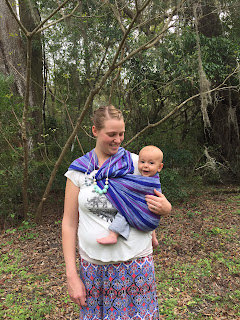 The tree that he asked her under is half the size it was then, due to its splitting apart a few years ago which is sad but the bees have made a home and a hive in it and fly in and out of an entrance into what must be a hollow part of the trunk and thus- more life and nature does abhor a vacuum whether in a tree or a couple's heart.

We kicked a few bamboo and Jessie peeled one for her son to gnaw on. He was not impressed although he happily reached for it and tried it out. 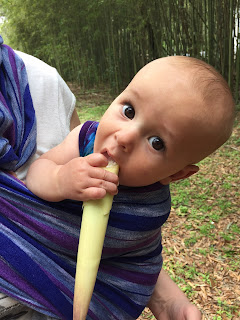 And then on to the garden where we pulled him a carrot which he worked at manfully while he stared at Mick, the rooster. 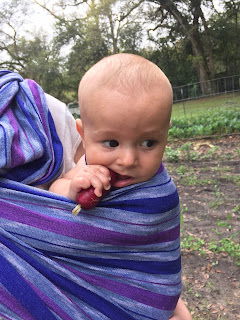 I kissed and hugged and tickled and played with that boy so much today. He is just such a fine baby. He is six months old today! Can you believe it? I love how when he takes a little nap and wakes up and sees me or his mama he just breaks into huge grins. Like, "Here I am! Back again! And there you are too!" He is strong and curious and as handsome as handsome can be.

After they left, Jessie stopped by Lily's to pick up a few things from Easter. Lily sent me this picture. 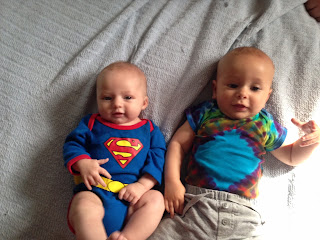 I can barely stand it. Super Girl and Buddha Boy.

And so it's been a good day. I've been easily brought to tears and I haven't gotten much done but that's all right. I did what I wanted to and ultimately, exactly what I needed to do. I even got the hen house cleaned out and that was a chore long overdue.

I've been trying and trying to get a good picture of the Bridal Wreath Spirea and have not made myself happy with the results but here's a fairly nice picture of Mick posing under it. 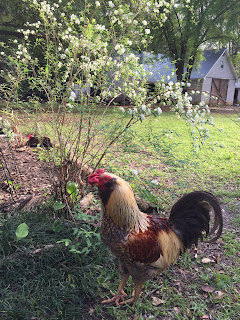 I swear. He loves to pose. Is this something innate in all beautiful creatures? I do not know. I don't know shit. But I do know that it's been a good day and I got to talk to my next door neighbors, who, although completely different from me in almost every way imaginable, are good people and wonderful neighbors and we are completely comfortable discussing chickens and goats and dogs and cats but I will never, ever discuss religion or politics with them. Which is all for the best. Trust me.

I plucked one of the last Seafoam camellias today as well as a few of the roses and here is what they look like in the hallway with my most formal vase which I actually bought in a store holding the mustard blossoms. 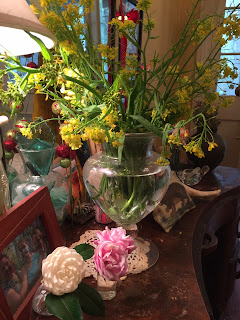 I saw one of the bluebirds fly out of the nesting box this evening.
I am cooking spinach and rice.
I am kissed-up and loved-up and laughed-up and filled up.
My man will be home soon.