Let There Be Light...Maybe Tomorrow?

I slept and I slept and I slept so hard that I didn't get out of bed until Mr. Moon called at 9:30 and the bed is barely disturbed. I don't even think I turned over once but stayed in the exact same position I was in when I turned out the light.
All of my plans to get out into the yard to work seem a bit overwhelming today, although perhaps I will, eventually, find the energy. For now I just feel a big foggy, a bit sore, as if instead of laying paralyzed all night I had been fighting with demons.

It's gray here today and that's all right. Spring is still upon us. 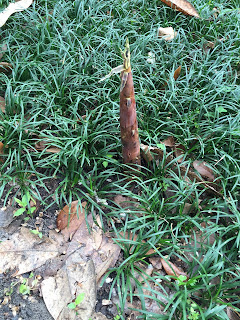 That's how much a bamboo can shoot up in one night. I'd say about eight inches tall. 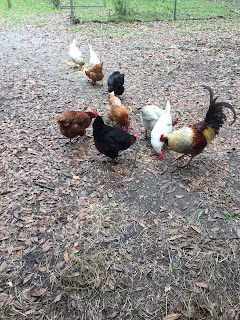 All of the chickens. Maurice and Jack both followed me out to watch the daily chicken-release ritual but it was Jack today who followed me around the yard. 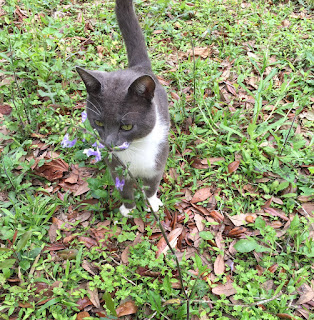 He is a most affectionate and curious fellow, that Jack. He ran about and then climbed a tree as if to show off his skills to his old human mama. 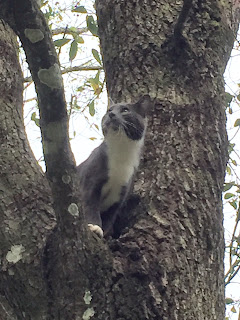 He is still a young thing and I am very glad he's come to live with us. He's charmed Mr. Moon completely.

The wisteria is blooming in the bamboo. 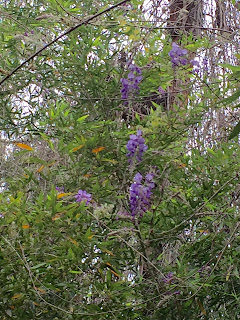 It's a weed. It's invasive. It is glorious.

The honeysuckle continues to bloom. 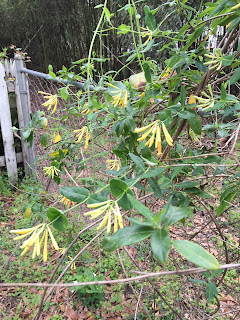 "Honeysuckle."
Could there be a prettier word? A sweeter word?

Oh dear Lord. I have so much to do and feel as if I've been shelled, I've been skinned, I've been de-scaled and am naught but a wiggling pink worm of a thing, trying to shelter myself from everything.
Which is fine.
This is a good gray day in a just-right place for doing exactly that.