So Many Pictures Of So Much Love

Well, I couldn't get to sleep last night. I was just too wired. And when I finally did, I slept until Mr. Moon came and woke me up because it was time for us all to go to breakfast and then for Lon and Lis to leave and for Mr. Moon and me to go back and help clean up from the wedding.
I was like a dead person.
"I can't open my eyes," I said.
"Having the same problem," said my husband. "All this pollen."
"Add in waterproof mascara," I told him. "This shit takes days to chip away."
"Mineral spirits might work," he said.
I told him that it probably would but that I didn't think I wanted to try it.

Oh god. It was just the best wedding.

I'll try to be brief. Getting ready for the wedding: 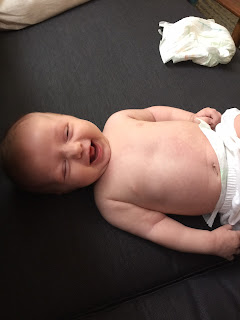 Maggie in the throes of joy due to being semi-naked. 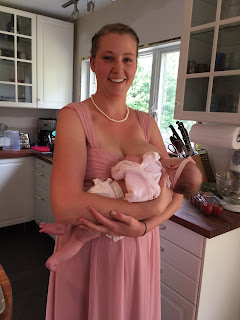 Jessie topping off Maggie before we leave. 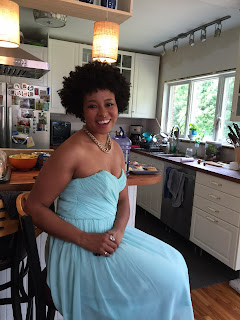 The incredibly beautiful (inside and out) Portia. 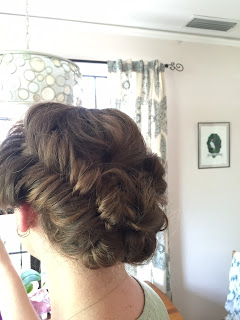 May's hair that her dear friend Jorden did for her. Is that gorgeous or what?

Now while I was lolly-gagging around eating snacks and watching beautiful girls get ready, Lis and Lon had taken on the task of decorating tables. At the last moment, May decided she needed table decorations and so Lis went out into my yard and picked flowers and leaves and gathered up the mason jars and by the time we got to the co-op where the wedding was being held, the room was abloom in glory. I do not know how they did it. I can only assume magic. My sister-in-law Brenda helped. And although I meant to get a picture and thought about doing so at least fifty times, I never did!
I simply cannot ever tell you how much Lon and Lis helped with this wedding. It would not been half as beautiful as it was if they hadn't performed their Lon and Lis miracles.
I am not even kidding you.
Here are the flowers we brought home last night. I think I will take them and make one huge arrangement of them for the house. 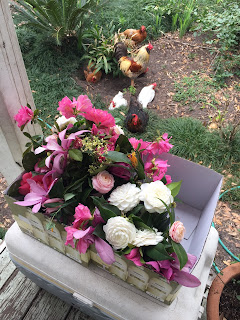 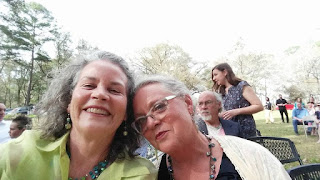 So Lucia, May and Hank's other-mother, and I sat next to each other on the front row and when the wedding party began to walk down the aisle, we started crying. And holding hands.
And then when this happened 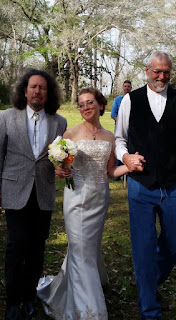 we needed to hold on to each other for real.

When they got up to the marrying place, May gave me her bouquet to hold and kissed both Lucia and me and we were all weeping. Her dads helped her up and came and sat by us and I was holding Glen's hand on one side of me, Lucia's on the other, and Lucia was holding on to Jerry's. It just felt like the most wonderful thing in the world. Yes, Jerry's and my divorce broke up a family. For awhile. And then we remarried other incredibly beautiful people and a whole new huge family was created and it has been one of the joys of my life.
The ceremony itself was wonderful. Kati was magnificent and Michael and May both spoke their vows with clarity and volume enough to be heard to the back rows. And they cried as they spoke them.
We all applauded and applauded as they kissed and kissed to pledge their troth and and as they descended down the step to walk back down the aisle as a married couple, May's hook at the top of her zipper gave way and the dress unzipped halfway down (it really wasn't that tight- I know- I zipped her up) and she gasped and Michael quickly held his hand over the back of the dress and it stayed up and we all applauded again! I turned to Lucia and through my tears said, "And that's the story they will tell their grandchildren."
Michael's first act as a husband of gallantry and protection!
Before the picture taking began, we found a safety pin and fixed it all up and there were no more wardrobe malfunctions whatsoever. 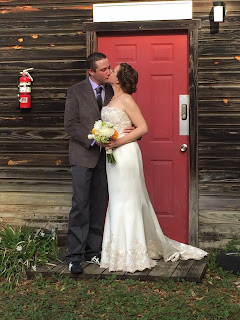 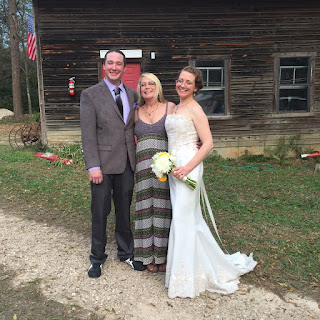 Kati in the middle. She said just the right words to get those two hitched.  And she said them beautifully. 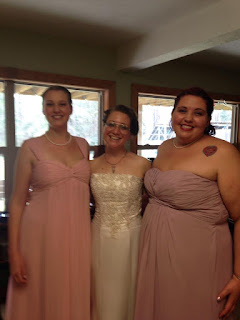 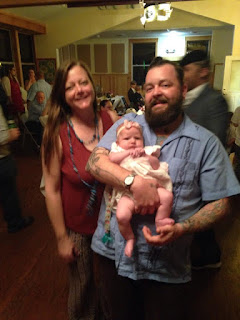 Billy and Shayla and Magnolia. 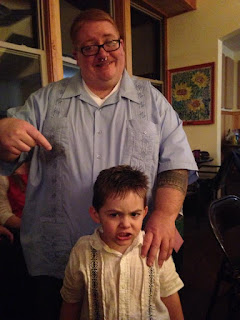 This was possibly taken after Gibson ate about forty sweet things. And maybe licked the cake. Maybe. 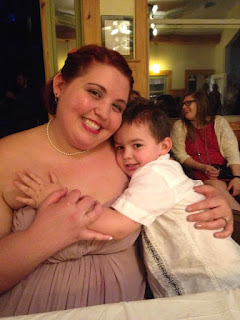 And then being sweet with his beloved mama. 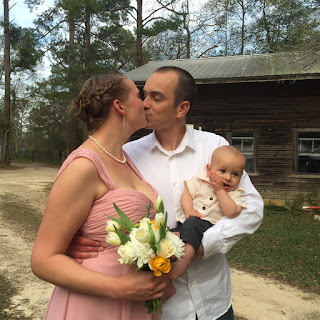 All they do is kiss. 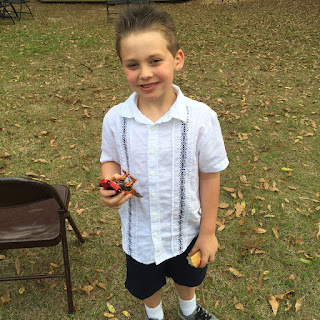 My beloved Owen, growing so fast, becoming so handsome. 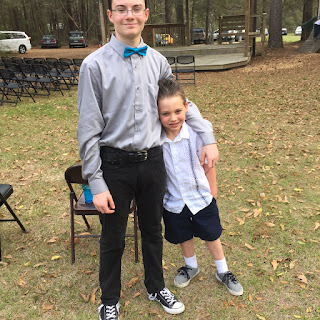 Owen with his somehow-cousin. That is Austin and he is Jerry's grandson from his first marriage. I know. I don't tell you EVERYTHING. But I dig Austin. He's a cool kid. As you can tell. When the band started last night I was sitting next to him and said, "Wait until all the old people start dancing."
"I'm leaving then," he said.
He was the one who escorted the mama's to our seats. 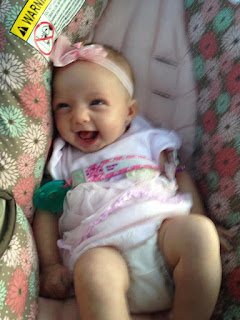 Magnolia June enjoying herself. At least it looks like she was. 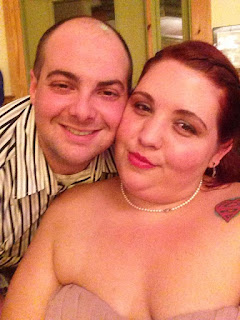 Lily and her darling, wonderful husband. Oh, Jason. How we love you! 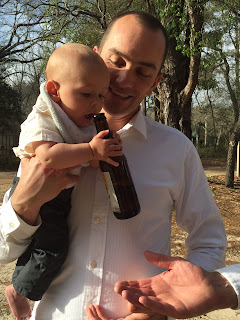 Okay. There's a story here. And no, of course August didn't get any beer. But two days ago, for the first time ever, August tried drinking from a bottle. To be clear- a baby bottle of his mama's milk. And he liked that fine and when Vergil went to give him another, he refused to let Vergil hold it for him and grabbed it and drank it by himself. So now he thinks that he's allowed to drink out of any bottle I guess, and grabbed this one out of his daddy's hand. This only proves the fact that breastmilk IS the original gateway drug to all others.
Beware.
Do you see Mr. Moon's and Vergil's hands ready to catch the beer if it drops? We shall waste no beer around here, people! 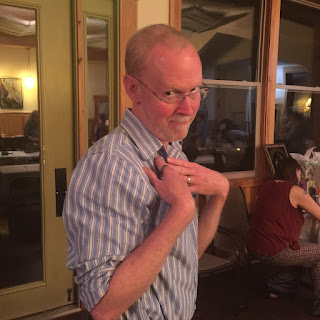 MY BROTHER, MR. CHUCK! He came to the wedding and it was so swell. I loved seeing him and being with him and it was yet one more true and beautiful blessing of this wedding. 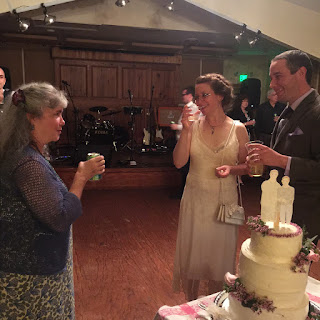 Lis giving May and Michael her toast which no one could hear except for the two of them which is exactly how she meant to do it. 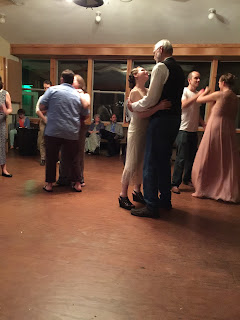 I feel so bad that not only did I not get pictures of the tables but did not get a picture of Brenda, my sister-in-law or of Liz Sparks who helped in all ways as she always does. Lord, there were so many beautiful pictures I didn't get. But you can get the spirit of it in all in these.

It's taken me all day to do this. When we got to the co-op after a Waffle House breakfast that was about as peaceful as trying to eat on the raceway of the Daytona 500 and then telling Lon and Lis good-bye, the clean-up crew had just finished. You know much I hated that, not being able to help. But we got to hug May and Michael again as well as Jessie and August and then Lily and I and all of the kids took Mr. Moon's truck and drove to town and picked up a table and chairs that Lily found on Craig's List. It is a table big enough for her growing family and also, a much better fit for the many people who will be gathering there to eat for holidays.
Like Gibson's birthday. Which is a week from now.
Anyway, Lily and I felt pretty darn sassy about being able to do that chore on our own and I'm glad we did it.

It's still bright daylight out, of course, seeing as how we're now in Daylight Savings Time which...really? Really? Why do we do this?
The redwing blackbirds are flocking the back yard and singing their scratchy and melodious tunes and Lon and Lis have gotten home safely to Gator Bone.

I have not been brief one bit but here it is- a small record of May and Michael's wedding and may they prosper and kiss and love together forever and always, being there side-by-side, for all that comes. May they share all the joy and may they face any adversity with their combined strength and love.
May they be as lucky as Mr. Moon and I have been.
And that's the best wish I could send to them. Ever.

I have a new son. I told him we'd be sending the family handbook to him next week. He is so handsome and he is so sweet and he loves May so much and she loves him so much. They started out as friends, they became sweethearts, and now they are husband and wife.
Did I ever tell you the story of the first time I met Michael? If you recall, Jessie dated Michael's brother Aaron a long time ago and one afternoon, Aaron brought Michael over to the house. Michael walked into my kitchen and the first thing he said to me was, "Do you have a recipe for coffee cake?"
"I do," I told him. And then I got out the recipe for sour cream coffee cake that my Lynn had given me and I copied it down for him and that was how we began our own relationship.

Yesterday when I saw Aaron at the wedding, he hugged me and said, "Do you remember that coffee cake recipe thing?"
"I do," I said.
And we laughed.
Who knew?

Who ever knows what's going to happen? A marriage leads to children and joy and then sometimes divorce and sorrow and then sometimes re-marriage and more children and eventually there are so many grandparents to love and be loved by and so many siblings and cousins and adventures and bonds and bindings and jokes and stories and love and more love and more love.
It's possible.
I swear to you and I would not lie.
Yesterday was a perfect day to remember and celebrate all of that as we gathered, family and friends together, to celebrate May and Michael.

Thanks for coming along on the ride, y'all. You've brought us all even more love. Which seems impossible but obviously, is not.

P.S. Thank you to Lucia and Joanna for the pictures I stole from you off of Facebook. I love you both so much.
Posted by Ms. Moon at 6:58 PM