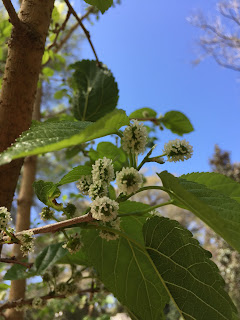 Look at those fuzzy baby mulberries! If the birds don't get to the fruit before I do, we may get a pie this year. I only planted that tree a few years ago and it is growing as fast as the grandchildren.

I've stayed home all day and done little things in my little world and one of the things has been to go around and check the greening, the budding, the growth. The branches of the fig tree are becoming green-tipped, the Buck-Eye is blooming and the Ashe Magnolia is wearing its soft fuzzy gloves.

I cleaned the hen house and did the laundry and made the beds and filled in the row of sugar snap peas where some didn't come up and weeded and then made a row for green beans and planted them. I have the water on the garden now and it looks so pretty in the gold of the setting sun. 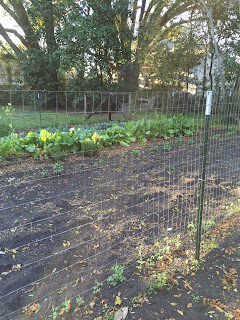 If you look closely you can see the peas coming up and the dusty row of potatoes breaking ground.

I picked kale and collards and mustards and brought them in and soaked them in a sink of water and chopped them up and have them cooking with red onion and all sorts of tasty ingredients. Mr. Moon just cleaned the bream and speckled perch he caught yesterday and I will give those a light pan-fry. Nothing sweeter than tiny lake-fish. I will cook grits and stewed tomatoes because that is what my mother always cooked with fish when one of the fishermen of Roseland brought her a mess to cook. I am not sure where she came up with that particular combination but it is a good one and I like it. Maybe our next door neighbor, Clara Lewis taught it to her. Clara was married to a fisherman and was a lighthearted and lovely soul and befriended my mother although in many ways, they could not have been more different. Clara's husband was her opposite in many ways and my memories of him are of a man who was grouchy as hell if awakened during the day by any of us kids including his own two sons, sturdy little boys whom Clara carried on her skinny hips, naked but for dragging diapers. I loved those boys. The fishermen of Roseland fished at night and so their day-sleep was essential for them and when they did get up in the afternoons, they squatted on their haunches and mended their nets and smoked and talked about fishing. Sometimes they built their own boats and always painted them with a red bottom because it was well known that fish cannot see the color red.
How odd that even as a child I knew to pay attention to these conversations of squatting men, to listen to their stories as I pretended not to pay attention. They were lean and brown and passed their boat-building and fishing knowledge down through the generations, father-to-son-to-son.
Clara's parents lived across the street from us and her daddy astounded and shocked the community when he abandoned his family and moved up north with a woman not his wife, leaving behind two families, one with grown children, one with a passel of younger ones whom I went to school with. They were so dirt poor. They wore the same clothes, day after day and their necks always bore the marks of dirt necklaces and their teeth were black. Their oldest sister tried to raise them after their mama died but it was too much for her. There were so many.
I grew up in an incredibly poor community, looking back. I remember kids being treated for hook worm (which we called "ground-itch") with Clorox applied to the insanely itchy tunnels the worms made in children's feet which burned the worm as well as the skin and I remember going to a birthday party where Kool-Aid was served, mixed with sulfur water and no sugar. We children drank it politely because we knew they couldn't afford the sugar and that was all there was to it. No one taught us not to say anything about it. We just knew.
We knew.

I don't know where I'm going with this. It's been that sort of day. I think of greens and I think of Chester, the Jesus-like figure in Roseland who sold turnips and turnip greens door to door. I think of chickens and I think of my best friend, Lucille Ferger whose family owned a small flock of Rhode-Island Reds. I think of fresh-water fish and I think of those stringy, strong fishermen, squatting and mending nets under the rubber berry trees. I think of mulberries and I think of the fruits of the giant tree in Carl Postal's yard which we children gorged on every year and ended up with pinworms.

Yeah. I had worms as a kid. Pin and Hook.

Fair trade-off for a childhood that allowed me to roam free down dirt roads and in woods and on docks.

Here are my own chickens and the garden too. 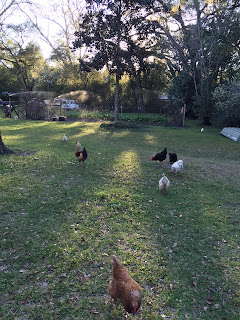