I was so exhausted yesterday in all ways and came as close to canceling out on going to supper in Monticello as I could be. And then, as if it were encouraging my decision, the wind suddenly began whirling branches about, whipping even the strong and sturdy magnolia tree and I thought- oh well, we need to stay home and be safe.
But Mr. Moon was in a mood and of a mind to go out. He reminded me- no cooking, no dishes, plus he wanted to give Lon a bottle of bourbon. As the weather got weirder and weirder, we decided to make a drink and sit on the front porch and watch it for a few minutes to see what it was going to do.
So we did.
We were rocking and talking and the wind was still gusty but it didn't look like it was going to rain when all of a sudden, a lighting bolt and giant clap of thunder occurred at the same time, so close that for a second we weren't quite sure we were still alive.
Of course we were, but it was enough to get my adrenaline screaming and as suddenly as the weather had come, it went.
"Okay," I said. "I'll go get dressed."
The Mexican restaurant in Monticello has been there for years. Many years. It's been housed in an old wood-frame building, nothing special at all but it's definitely the longest-running eating establishment in town. The joke of course is that it's the best Mexican restaurant in town because it's the only Mexican restaurant in town but it's always had decent food. Of course they'd tried to fancy it up a little with Tex Mex decor here and there on the walls but at heart, it was a very plain and simple dining area and I'm sure the kitchen had its own funky problems as old kitchens will.
Several years ago, the owners of the restaurant began to build a new building across the street from Rancho Grande. It went up slowly and reminded me of how they build houses sometimes in Cozumel in the 'hood which is basically, every paycheck that comes in buys something needed for the construction like a few cement blocks or a pane of glass and it may take years and years to build a simple concrete and rebar home. But this building looked to be far grander than anything as simple as that and certainly far grander than the original restaurant. A floor appeared, then walls, doors, windows...
Slowly, the work was done. 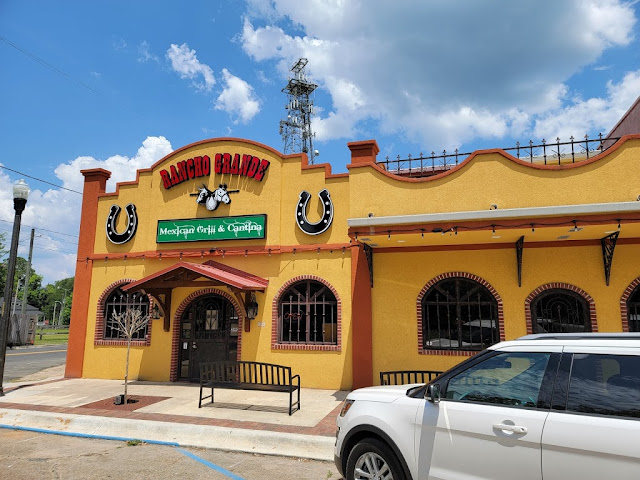 And miraculously, it opened last year during the time of covid. I had not been to the new place until last night, although I'd driven by it and when we walked in, I was astounded. 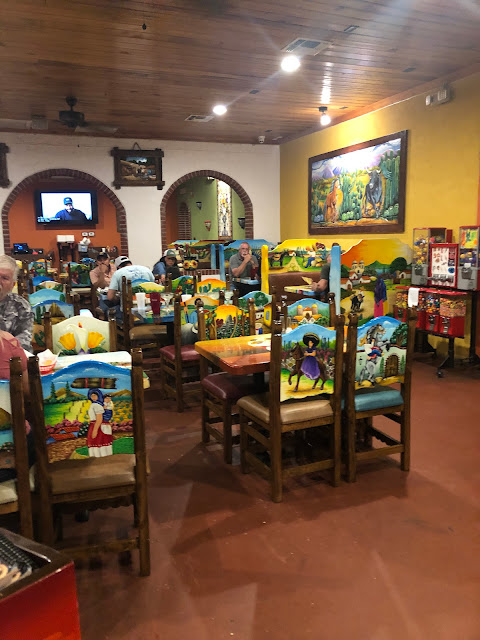 I took that picture as we were leaving because when we got there around 7:45 on a Tuesday night in Monticello, Florida, every seat was filled.
Every seat.
We found Lon and Lis who had somehow gotten a booth and already had chips and salsa and refried black bean dip in front of them. Lis had a margarita. It was all so beautiful. Every table had artwork on it. Every chair too. Pictures on the walls, Talavera tile in abundance (and that stuff is not cheap), just the prettiest and definitely most colorful restaurant you can imagine. We all ended up with margaritas and our server was amazing. I wanted to adopt her and bring her home. She entertained us all evening. And she hustled. The menu was vast, our food came out far more quickly than I thought it would, it was so reasonably priced, and it was delicious. Here's what Mr. Moon had. 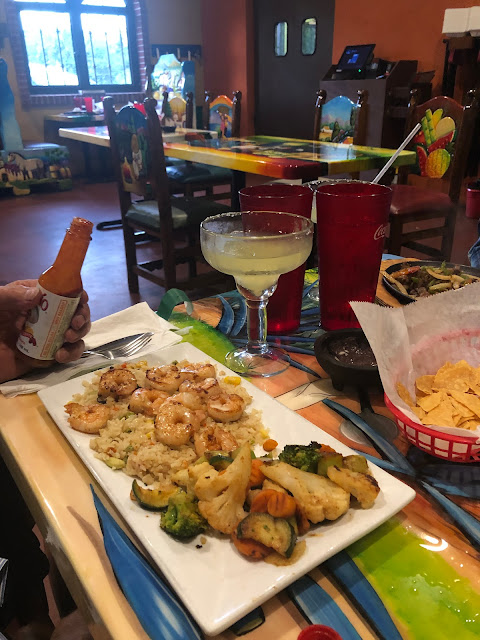 I was blown away.

And then I went into the ladies' room. The floor was a work of art. 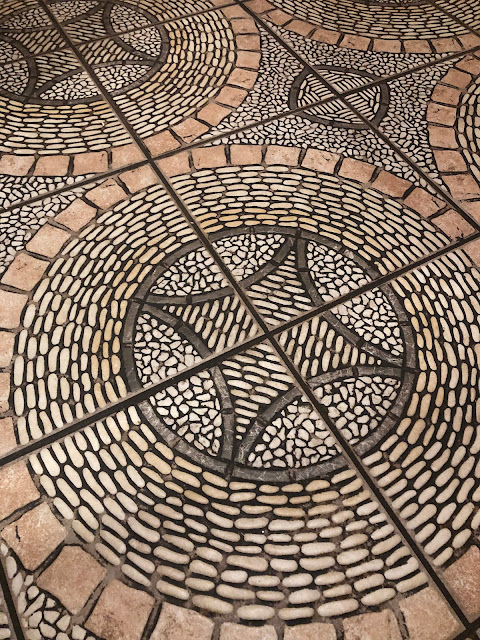 Whoever laid that stone mosaic was an artist and a master craftsman. I was completely taken aback. The sink area wasn't bad either. 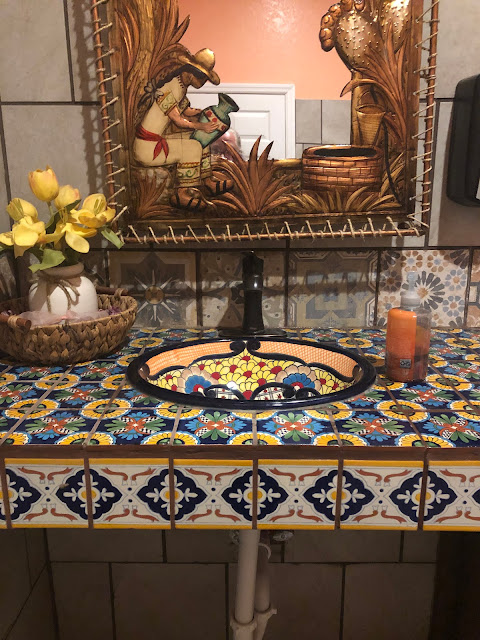 More Talavera. I can't tell you how impressed I am at the work and love and perseverance and hope that this new restaurant represents. And all of it from people who came to this tiny piece of the United States and somehow, with so much strength and determination, have created such a welcoming and terrific place for people to gather and eat good food. 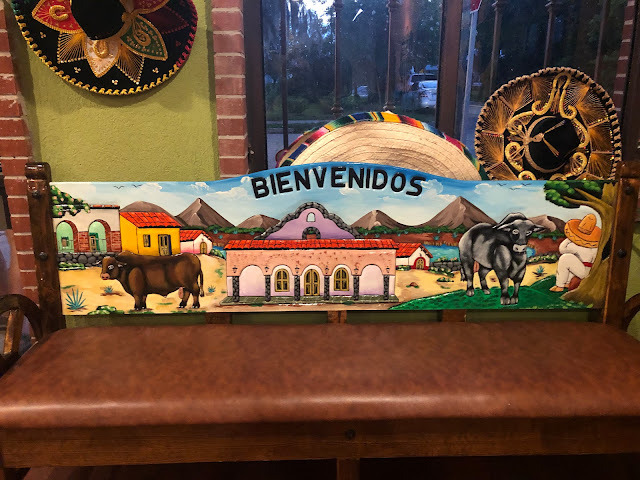 I wish them all the luck in the world. If this is not a perfect representation of the American dream, I do not know what is.
After supper we stood around outside a bit and talked some as the sky gathered itself into darkness. It has been such a good visit with those two precious people from Gator Bone. How I hated to tell them good-bye! How grateful I was that I had not missed out on the opportunity to enjoy that one last meal with them before they left for home. Lis will be back soon as she is playing at a song-writing event in Tallahassee and will spend two nights with us so my heart was not entirely broken. What a beautiful evening.
And today has been a beautiful day. I have relaxed and breathed and looked at the sky and the cypress trees. 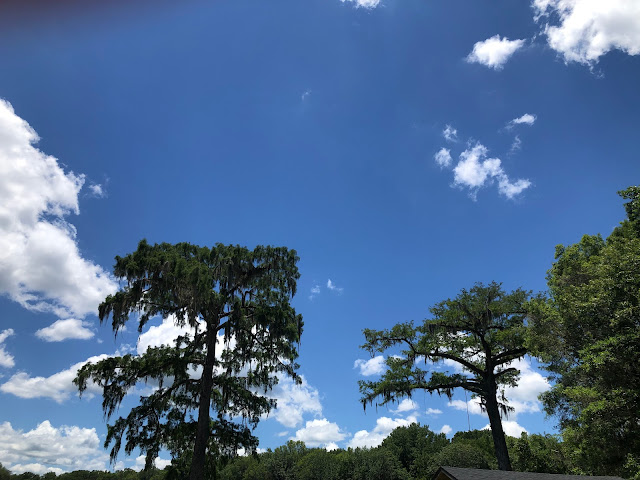 I have rested my eyes on the water and spent time with my Lily and Owen and Gibson and Magnolia June. 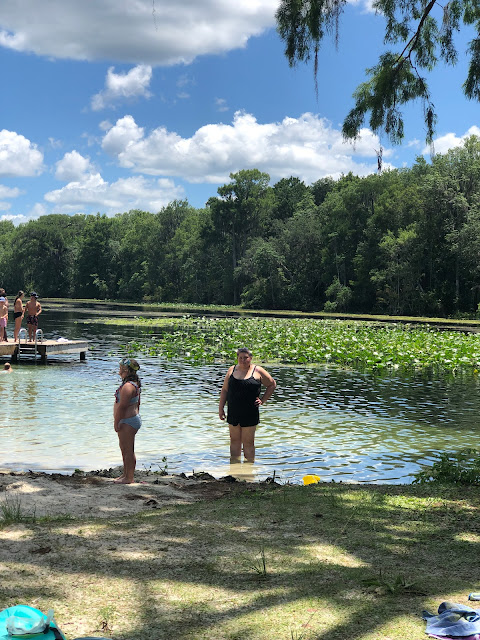 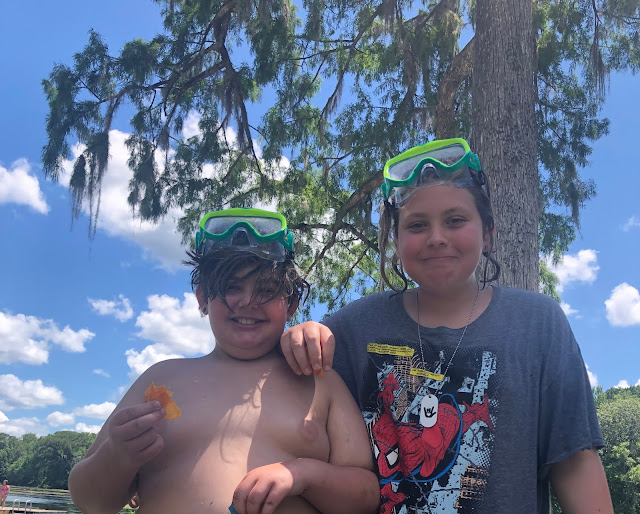 I have baptized myself in the icy, holy water of the Wacissa three times and I feel as reborn as a woman my age can feel. I brought my newly cooled and blessed skin home to my husband and I am cooking some of last year's field peas because soon we will be eating this year's field peas.
This post is long. Forgive me. Tomorrow's, I promise, will be much, much shorter. Also, please forgive the totally messed up format of this post. Blogger is just being ridiculous and no one has time to try and figure this shit out. At least I don't.
Love...Ms. Moon