The Season Of Sweat Is Upon Us 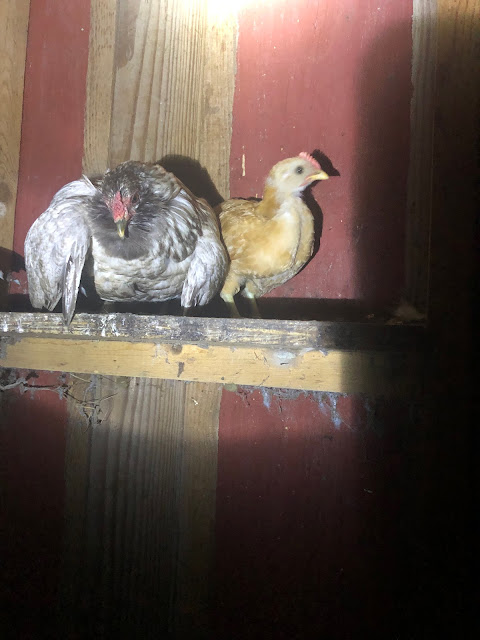 This is what Violet and Pansy looked like last night when I went to shut them up. Violet has always roosted on a ledge rather than in a nest at night and she is teaching her baby to do the same. She has her wings spread like that because of the heat. And Lord, it is hot.
Here's what Darla and her darlings looked like. 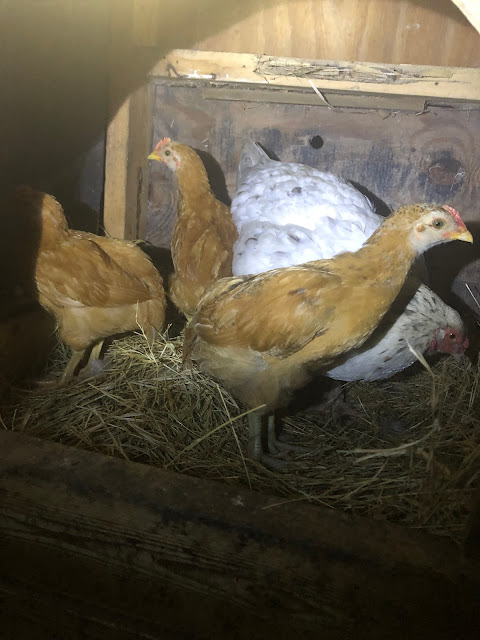 They are all getting so big. I wonder if they'll all continue to sleep together when the children are grown. It's a definite sign of maturing when the chicks can make it to a ledge or a nest to roost, rather than on the ground of the hen house. And so much safer for the babies.
It's been another hellishly hot day with no rain in sight. I managed a shortish walk this morning without dying and then I did too much outside. I sometimes wonder if I'm trying to kill myself. It's just that there's always so much to do and it nags at me and nags at me until I do it. Of course it's never done so this is ridiculous behavior. Sometimes I think, Well, I'm getting older and trying to do all of these things is perhaps more than I should be doing and then I think of those women who run marathons at eighty and old grannies who keep a huge garden up into their nineties and I feel like a wussie.
This is yet another problem with our world in which we can access information about people all over it, not just in the village where we live with a hundred or so other people. In a village of that size it is quite possible to be the best at something, whether it's growing the biggest cabbages or baking the lightest bread or telling the funniest stories or singing the prettiest songs or sewing the warmest quilts or being the best at herbal remedies. Post a picture today on FB of YOUR pickles and someone else is going to post a picture of theirs which make yours look like shriveled, pale sea-creatures captured in a jar. Open a catalog and see a woman of eighty-two who is still absolutely stunning and making a very fine living as a model. It never ends. And as much as I'd like to think that I do not compare myself to others, I am as human as the next person and so of course I do! I don't care as much these days, but don't we all measure ourselves and what we do by the accomplishments of others?
How I wish we did not.
Well. I suppose you can tell that my mood is still somewhat...impaired. But Lis is coming in soon and I am cooking the very last pot of last year's field peas and I have been working a little bit at a time all day on a tomato pie. I've made the pastry and have roasted a few tomatoes and have others draining on dish cloths and I've grated cheese and sauteed some onions. It's all ready to put together. It's a tradition for us to have tomato pie together in the summer. We started it in Asheville when we used to go up there to see Jessie and for Lis to go to the Swannanoa Gathering when the farmer's markets were bursting with the most gorgeous heirloom tomatoes. Oh, what beautiful trips those were! Tomato pies are sinful. They are an excellent example of how you can take one of the most perfect and delicious foods on earth and turn it into something that will give you a heart attack as quickly as a pound of bacon. Some people actually PUT bacon into their tomato pies but I do not go that far. As I told a friend the other day, one should only make and eat one tomato pie a year when the tomatoes are ready and ripe and bountiful. There is no excuse for it otherwise.
Tomorrow the televised hearings covering the January 6 Capital riots of 2020 will start and I hope to watch as much as I can.
Mr. Moon and Chip will be on the first leg of their journey to Dog Island to take supplies over there for the new flooring as well as a new washer and dryer and then they will come back here tomorrow evening, sleep and get up early to meet the ferry taking everything over. I have to tell you that I am not happy about the idea of those two men working in this heat, dragging things up and down the stairs of the house which is built on pilings to prevent flooding during hurricanes. I would not call them old men but they cannot be called boys anymore either. At least the house has air conditioning and they have promised to take lots of breaks.
I do not believe them.
Off to go build a pie which is the only construction work I'm interested in doing.
Love...Ms. Moon 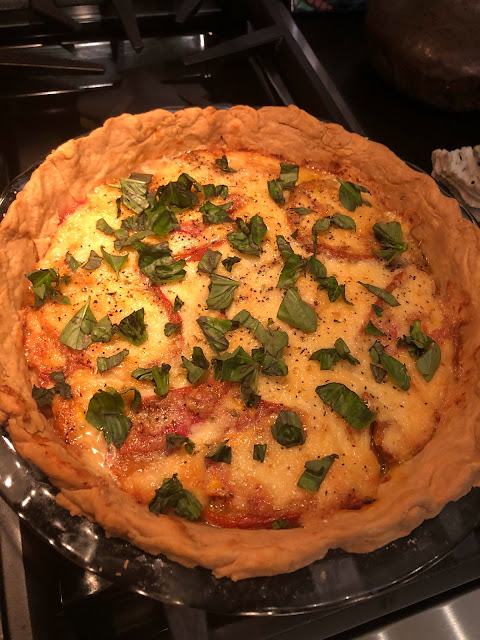