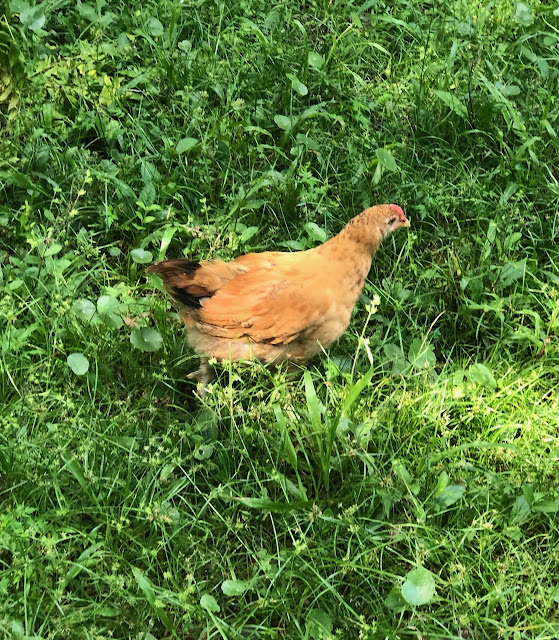 There's Dearie and I am thinking he's a he. He and his siblings and mother and Aunt Violet and Cousin Dr. Pansaloony were outside in the desperately-needing-cutting stuff we call a lawn around here. It's green so who cares? It's a little surprising that it's still green because it is wicked hot and we are now dry. But weeds are hardier than actual grass, I guess, and the chickens seem to like picking through it. I am sure they find lots of bugs to munch on.

I did not go to town today. When I woke up I realized that I truly didn't need to. I have stuff in the freezer that I can make a casserole with to send to the island and that's really what the men need. Something they can nuke because the stove hasn't been installed yet. They do have a grill and plan on cooking some chicken maybe, some fish for sure. So after the realization that I didn't have to leave Lloyd, I felt like I had discovered a day off which was lovely. I hung laundry and then went and picked the garden. 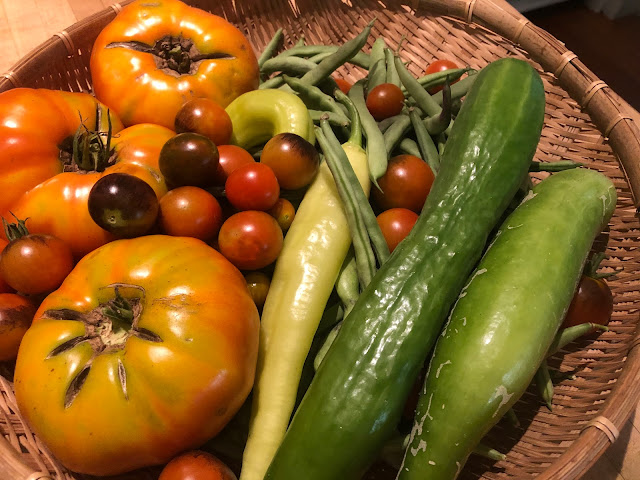 That's over six pounds of beans, tomatoes, cucumbers and peppers. I know because I weighed them on my granddaddy's old scale which is still surprisingly accurate, despite looking like it should be in a vintage shop. 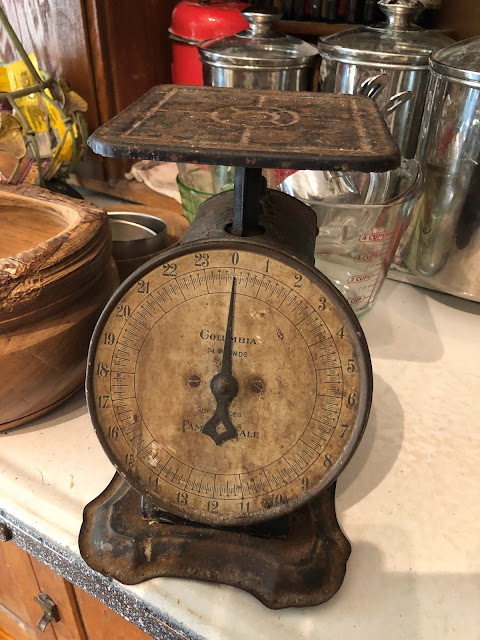 It does come in handy because a lot of recipes for canned goods call for specific weights and I would have no idea how to estimate that. I am good at estimating teaspoons and cups but not weights.
Thanks, Granddaddy!
I did sit and knit and watch today's Jan. 6 hearing. Man. Fucking Forty-Five just looks worse and worse, doesn't he? They way his voice gets all wheedley and hey-it's-just-us-Republicans-here is so slimy and gross. And then the threatening starts when whatever official he's talking to refuses to bend to his requests for criminal favors. I'd say that Rudy Giuliana is even worse but he wasn't the president. Just his mouthpiece, his glob of talking mucous.
This would all be so entertaining if it wasn't so fucking scary. People's lives have been turned upside down and absolutely ruined because of the accusations FFF made about them. His minions believed him and two women who gave their testimony today, Ruby Freeman and her daughter, Wandrea Moss, broke me with their stories of how the death threats and racial epithets and hateful messages they've received have made them afraid for their very lives. 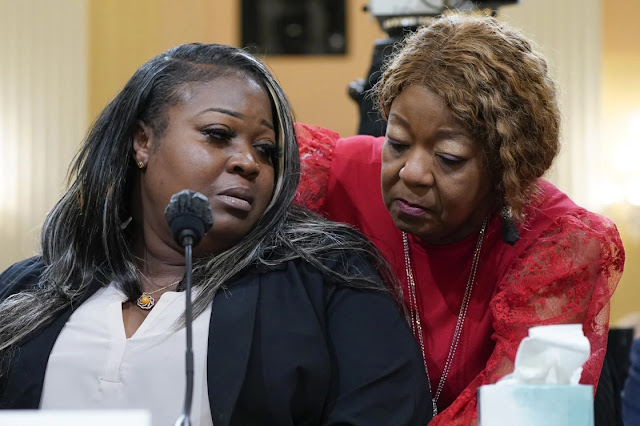 And all because Trump and Giuliana came up with one more false bit of evidence in the big lie that Trump actually won Georgia- a video of vote counting that Moss and Freeman were in, counting votes as directed by law. Doing their jobs. Jobs that they have loved doing, but which they have stepped down from now because they cannot tolerate the hatred directed at them.
Well.
I can't believe how close this country came to people warring in the streets to overthrow the results of an election which was held fairly and legally and constitutionally and if wasn't for people who did their jobs, who resisted the coercion and pressure of the president of the United States, that's what would have happened.
You know what else I can't believe?
That Trump is not in prison, and in fact, could conceivably run for president again. And that his followers are as rabid and insane and determined as they ever were, if not more so.
That's enough of that. I would much rather think about sliced tomatoes still warm from the garden with salt on them. I would rather think about my husband who has not had time to mow the yard because he's working on this deck non-stop.
"How can you stand working in this heat?" I ask him.
"Aw, it's in the shade," he says. It's also about 96 degrees in the shade.
It's going to be a beautiful deck.
And right on time I hear Liberace, calling to the flock.
It is the summer solstice.
And oh yes- it would appear that Mick Jagger has survived his bout with covid.
Love...Ms. Moon
Posted by Ms. Moon at 6:23 PM