And Every Jar Has Sealed 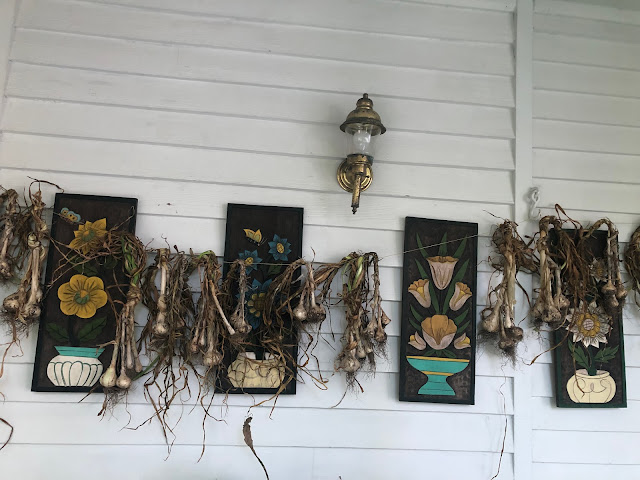 I have had very little energy today and have not spent a great deal of time outside. I did sit on the porch with a ceiling fan and a floor fan on me and rebraided the garlic and hung it up. When I did the first braiding, it was too green and too heavy so I dried it on newspapers on the porch for a few weeks and now it's hanging on the wall as you can see.

I took the trash and went to the post office where our new voter registration cards were waiting for us in our box. And of course, a new New Yorker magazine to add to the guilt pile. I just poked around the house until about 2:30 at which point I realized that I had planned to make dilly beans today so I began that process.

For those of you who have never canned anything, I will briefly describe how it goes.
I get the canning kettle out of the pantry and fill it partway with water, put my jars in it which have been washed in warm soapy water and rinsed. I put it on the stove and fill up to about two inches above the jars and turn that on. I put the lids and bands I will use in another pot and theoretically bring that to almost, but not quite, a boil. However, I always forget until they are steaming away and then I curse myself and turn them off. And sigh.
Oh well.
While the jars are in the process of being sterilized, I begin to cut and trim my beans to size. I wash them first, of course, and I have a mark on my cutting board which indicates a jar height and I save the pieces I trim off which aren't big enough to go into the regular jars and those I can by themselves to use in salads. Why waste good bean-material?
This takes a long damn time. Each bean has to have its stem-end removed and then trimmed and that's a lot of beans on a good day. I can only do seven pints in my canner so that's what I prepared today. I had beans left over and I will cook some of those for our dinner tonight.
This is also when I make the brine for the beans. For dilly beans I use vinegar (both white and apple cider), salt, and water. I like mine to be a little sweet so some sugar goes in there too. That must be brought to a boil. By this time the jars have been sterilized and I set them out on a towel using a jar lifter. I then fill them with the beans and this, too, takes a while, trying to pack them in an orderly fashion so that I can fill the jars as much as possible. When that chore is over with, I peel garlic and add two cloves to each jar and then measure out dill seeds that also go into each jar and I add a sprinkle of crushed red pepper to each of my jars as well. Then each jar is filled almost, but not quite, to the brim with the hot brine.
Then the over-boiled lids and bands get put on and they are set back into the canner, the water brought to a boil again, and are processed for ten minutes after that.
Then they are lifted out and set on the counter and I wait to see if all of them will seal. 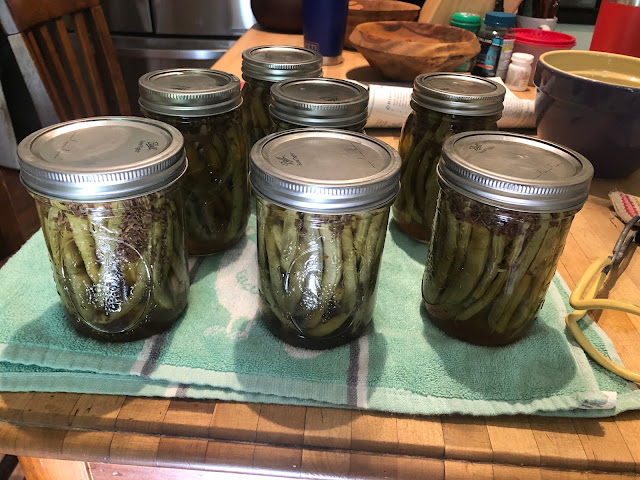 Generally, most of them, at least, do. If a jar doesn't seal (and sealing is indicated by a sucking-in of the lid with an audible pop), I will stick it in the refrigerator to use first. After the beans have all cooled down, into the pantry they go.
A bit labor intensive, yes?
But so delicious and there is no way I would let such good produce go to waste so the only other alternative is to not plant beans or not plant as many but hell- where's the fun in that? The rattlesnake beans are by far the most reliable and dependable thing we plant and it would be a shame not to take advantage of that.
It looks to me like Darla and Violet's children are getting to the size and age where they will soon be cut loose by their mothers. Dr. Pansaloony is absolutely three-quarters of the size of his/her mother now. I wonder if she/he will continue to sleep up on the rafter with Violet when he/she gains independence. I know that some of these birds are roosters but I'm not betting the ranch on any of them at this point. I have my thoughts on the matter. I see some of Darla's kids play-fighting in the way of roosters. They face each other with feathers fluffed, and bounce off each other's chests. Breasts? I have not paid enough attention to this phenomenon to know if it's only males who do this or if hens, too, join in. I know that adult hens definitely bow up with other chickens when the necessity arises. It is a rather comical sight to see the young'uns practicing these martial arts. They only do it for a minute or so and then they become great friends again. There seems to be no real malice involved.
I texted with Jessie today. We miss each other. I told her that in pictures, it looks to me like Levon is growing so much. She said that they both are and eat all day long. I asked if she ever thought about just giving each of them a loaf of bread and a jar of peanut butter every morning and she said, "Hah! That's not a bad idea. Levon would require a bunch of bananas and a jar of peanut butter. That's literally mostly what he grows from."
Here's a picture she sent of the little family. 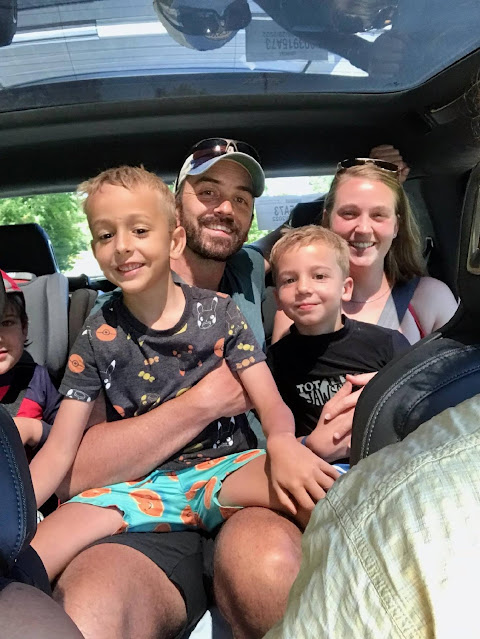 They ARE both getting so big. I can't wait to see them. They are glorious to me.
And that is the daily report from here. I will probably go to town tomorrow as Mr. Moon is going to be going back to the island, leaving on Wednesday, and I need to make some food for him and Chip to sustain them in their labors.
Liberace is calling to the hens to gather them all and let them know that soon it will be time to meander towards the roost. I think they know that already but it is his job and he does it well. I have noticed that in this heat, he does not crow nearly as much. He is as enervated as the rest of us.
Tomorrow is the longest day of the year and there will also be another hearing on the insurrection. I think I will try to get my shopping done early so that I can sit, knit, and be shocked and enraged.
Oh, what fun.
Love...Ms. Moon