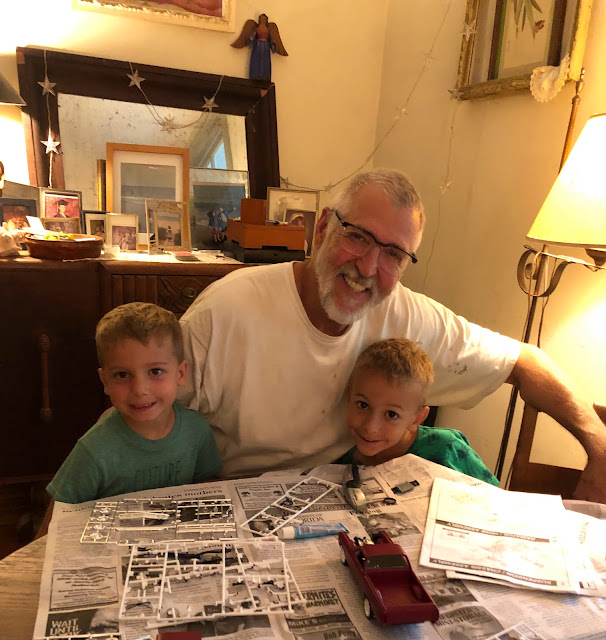 Now there you have three good-looking boys if you ask me. Levon is trying out a new smile, I think. They are helping their Boppy with the model car. Some of you may recall that this project has been going on for some years now.

Oh wait. That was ten minutes ago. Now they appear to have set the burn pile on fire. I can't keep track of what those fellas are doing.

I need to get supper fixed so this won't be long. I've got chicken and garlic simmering to make the requisite chicken and dumplings. August helped me snap the beans that I've gathered in the garden the last few days and I have carrots I pulled to peel and cut up and all of those, with some celery and an onion will be added to the broth. A meal in a bowl.

I got some news that really upset me about an hour ago. The FDG which henceforth shall be called the GDFDG is not going to carry fresh produce but instead, only the crappy canned goods and off-brand chips and crap that they all sell along with household crap. How they think they can make any money off of the people in Lloyd as customers is a mystery to me. There's more concerning the septic system and so forth but I don't have time for that now. The main point here is that the one and only reason I did not think that having that eyesore built there was the absolute worst thing that could happen in Lloyd is that I thought it would be of use to the residents here who cannot get to Tallahassee or Monticello to buy food.
They can already get beany-weenies and Vienna sausages and Doritos at the store by the interstate. I do imagine that they will be cheaper at the GDFDG, though.

So it goes.
More tomorrow.