In Which Slime Is Made, Goldfish Is Played 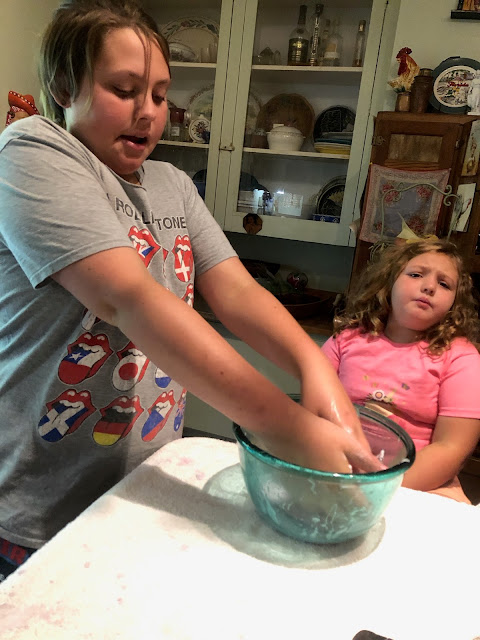 Here we have a picture of Owen mixing up slime and Maggie wearing her "it's not fair" face. She wanted to be the one mixing it. Or she wanted to add more color to it. Or something. She attitude-adjusted soon enough.

Remember last week when the kids wanted to make slime but I had no borax? Well, I bought an entire box of it this week at the grocery store which is pretty funny because you only need like one teaspoon but since I can also use it as a laundry additive, I don't mind. The recipe we used didn't quite work out the way the kids thought it would. Would you believe that online recipes for kids' activity stuff are just like the online recipes for food? They start out with the history of how and when they became acquainted with this particular substance, whether it be a chocolate cake or a batch of slime and go on for eons about the subject and it infuriates me. JUST TELL ME HOW TO MAKE IT! I DON'T NEED TO HEAR ABOUT SNOW DAYS OR YOUR GRANDFATHER! OKAY?
Anyway, we ended up putting everything in that slime that was mentioned in any of the myriad of instructions we found including hand lotion, shaving gel, corn starch and of course borax. And Elmer's glue. And after much mixing and kneading and adding a bit of this and a bit of that, it turned into what feels and acts very much like Silly Putty, so- excellent!
Then the boys wanted to make oobleck which is corn starch mixed with water and which has extremely odd physical properties as anyone who has used cornstarch to thicken a sauce knows.
So all of that was fun and we had a good day together. I made them all smoothies when they got here and they voted on cheesy noodles for lunch which I served with cucumbers and raw carrots. They loved that. We played one game of Yahtzee, or at least Owen and I did. 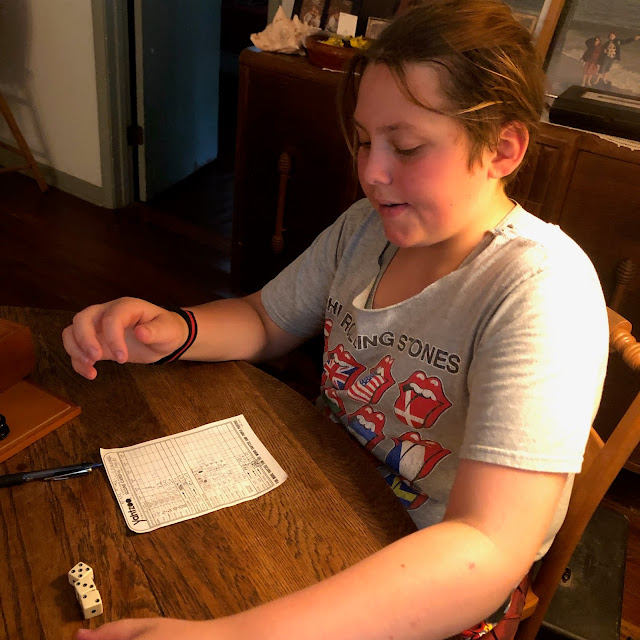 That was super fun. And again, Maggie and Gibson drew pictures. 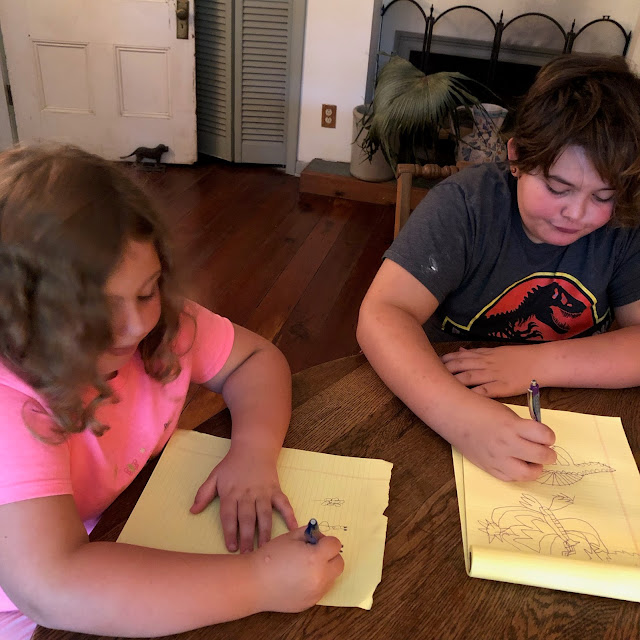 They both rather amaze me.
Here's Gibson with his creepy hand. 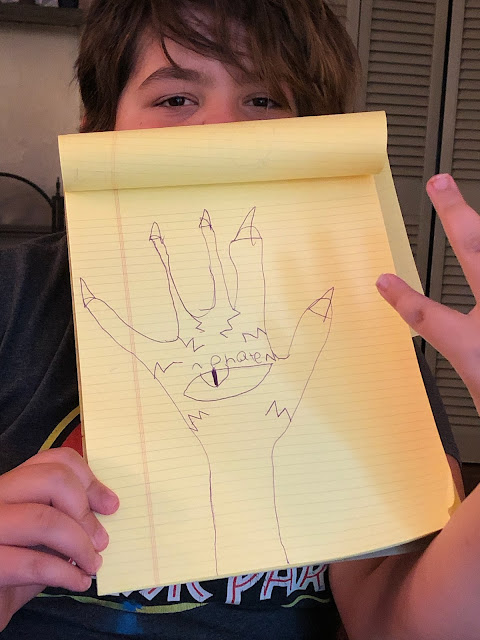 And Magnolia with some butterflies and a cat. 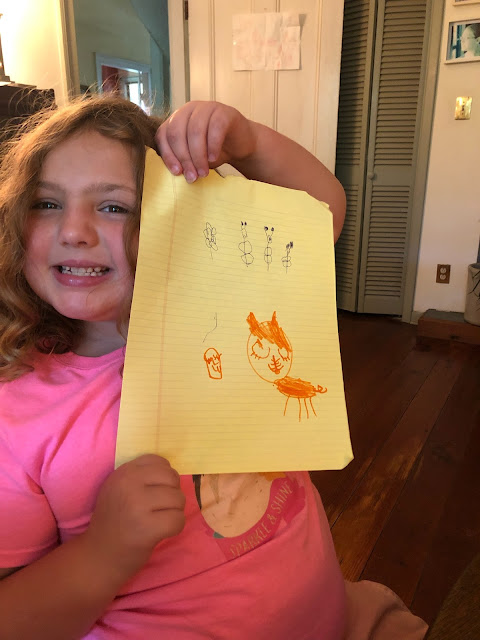 She proceeded to draw an entire family of cats. She drew a lady cat to go with that one (who is a boy cat) and she said they fell in love and got married. I suggested she draw their kitten. So she did. And then she wanted to add a grandmother and grandfather but she was a bit stymied. She didn't know how to draw the wrinkles on their faces. She illustrated "wrinkle" by tracing some of the ones on my face with her finger.

"Oh, cats don't get wrinkles," I said. "They just sort of look like they did when they were young."
"I know!" she said. "I'll give them glasses."
Genius or what? 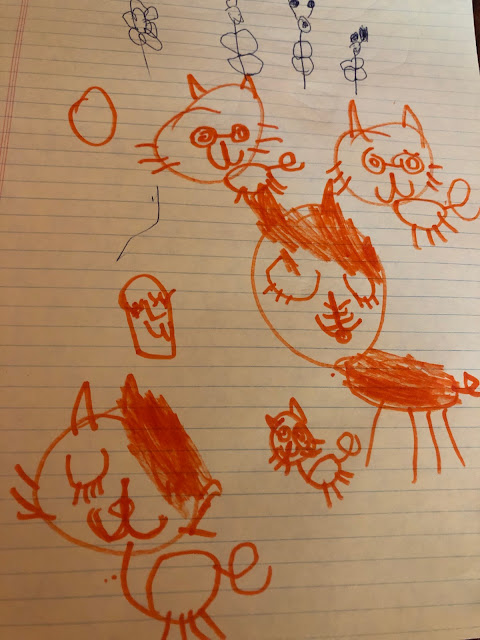 I assure you that any artistic talent she or any of my grandchildren have did not come from me. I couldn't draw that convincing picture of a cat if my life depended on it.
Maggie desperately wanted to play Goldfish which  is what she insists on calling Go Fish, no matter how many times we correct her. Gibson was not interested but Owen was and we played two games and it was hysterical. Maggie's innocence in letting us see her cards is adorable and she is so very happy just to be playing. "Goldfish!" she says, when she doesn't have the card we ask her for.
And we do.
Speaking of going fishing, here's a picture Mr. Moon sent me this morning. 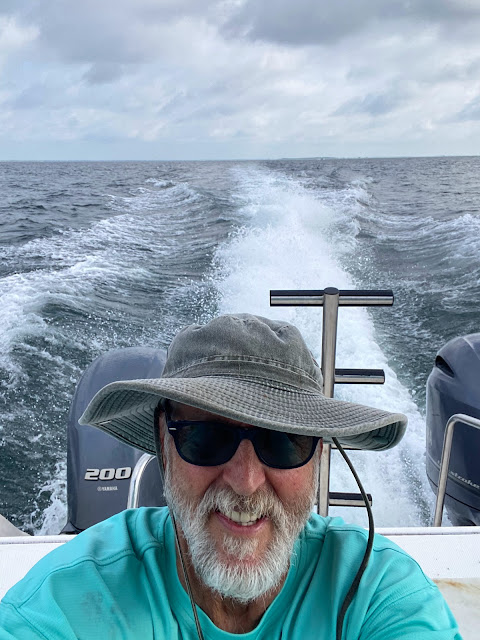 I showed it to the kids and Owen said, "He's always happy on a boat." And this is as true as can be. My Viking.
So that's been my day. Because I did not walk this morning my core temperature was not elevated into the billions of degrees and so the things I have done outside (hanging laundry, bringing in laundry, picking some things in the garden) have not caused me great distress even though it's as hot today as it was yesterday.
A note to Steve Reed- yes, Owen is wearing one of the Rolling Stones T-shirts that you sent me from London. I gave it to him today. It was not easy. I wore that shirt in Cuba. But. I asked Owen if he would like it and he said quite enthusiastically that he really would. And so- I told him he could have it. I swear to you- I've given away jewelry that was easier than giving away that shirt but he will wear it, he has met Steve Reed and remembers him, and he knows how much his crazy old Mer loves the Rolling Stones.
Ay-yi. I do love that boy, my first grandchild, the one who gave me my grandmother name.
Clean line-dried sheets are on the bed. A nicely shaken martini is at hand.
You know what day it is. 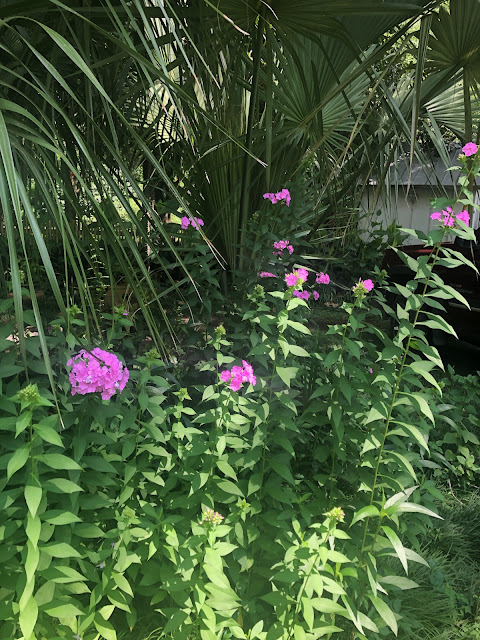