All God's Creatures, Some Smarter Than Others

I slept for almost ten hours last night. It was crazy good. It started raining around 8:30 yesterday evening and although it wasn't a hard rain, it came and went for quite awhile and I felt quite cozy and sleepy when I went to bed and I stayed there until I was ashamed to stay any longer.

I took my sweet time with the morning, too. I did my crossword puzzles and Wordle and read blogs and commented and made a breakfast and let the chickens out.
I finally went out to the garden where I weeded for about an hour and that was all I could manage so I came in and took a break and then went back out later but not for very long. It wasn't a pleasant experience. Too hot and besides that, my left knee is now giving me hell and even weeding on my knees is painful. I'm falling apart, piece by piece, joint by joint, and it truly and surely sucks.

So that's what I did on my "day off" and honestly, because I did not need to think about anyone else's needs or schedule, it was nice enough.

I got a picture from Mr. Moon this morning that made me happy because I know he was happy. 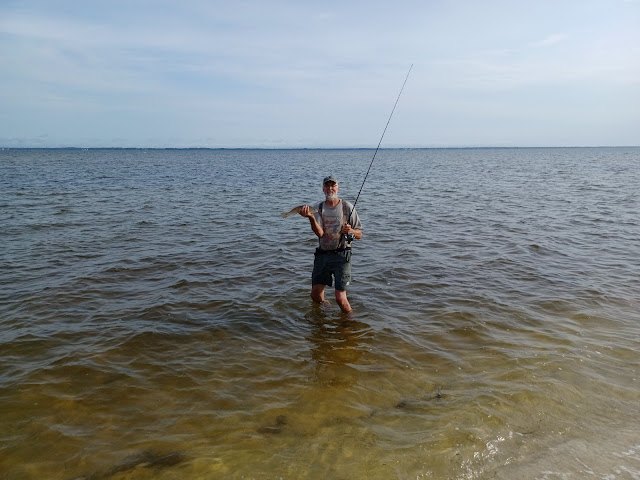 I'm sure that was the best part of his day as he and Chip had tons of stuff to unload and carry up to the house. They were exhausted last night from getting things from the mainland to the island and then to the house and today was probably even harder. He called me last night and said that I'd saved their lives with the soup I sent with them and the roasted almonds and the cookies. It is nice to be able to provide life-sustaining sustenance to people I love, although, I am quite sure that they would not have died had they eaten Beany Weenies from a can and Oreos from a package instead of what I had made.
It's been a sort of critter day for the family.
Lily sent us all this picture with the caption, "There seems to be a glitch in the matrix." 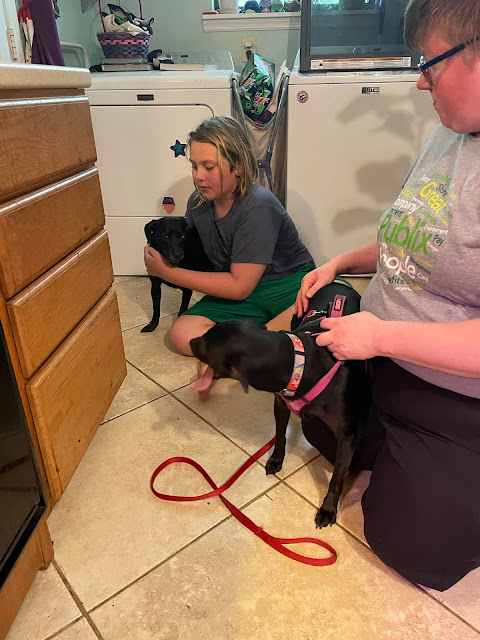 Lauren, who adores animals, was "just looking" at the local animal shelter's website when what did she find but a doggo who looked just like her sweet Pepper. So of course she had to go and meet the little girl in person and as one would expect, she fell in love with her. She then took Maggie and Pepper to the shelter to see how they all got along and, well...
There's a new member of the family. Her name is Chloe. She had been surrendered because her people had had to move to more affordable housing to a place where dogs weren't allowed. So sad. But hopefully, she'll soon learn to love her new family which will certainly love her. 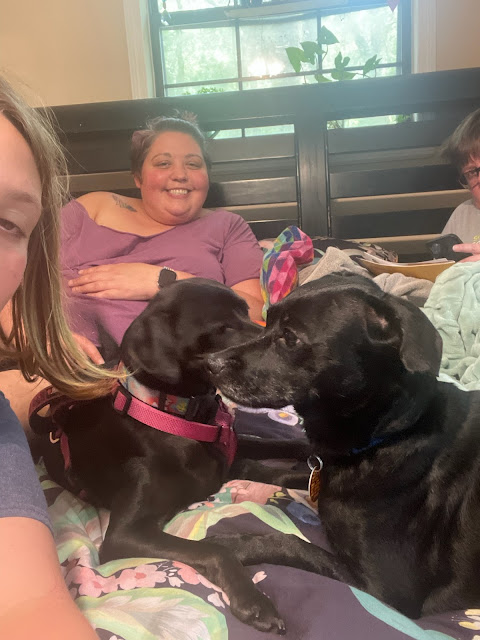 Lily said that they appear to be getting along although of course, Pepper is a not quite entirely pleased that a new sister wants to share her space and place and things but overall, she seems excited. They'll work it out.
And then Jessie sent this picture. 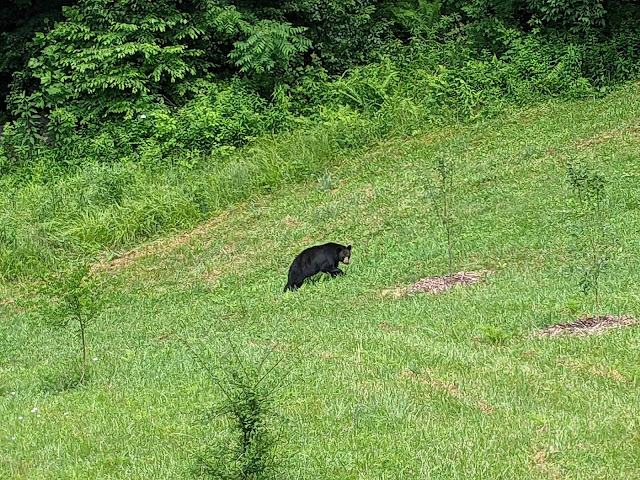 That was taken from where they are living on Black Mountain. And of course I'm like, "WHAT? ARGGGHHH! BRING MY GRANDCHILDREN HOME AT ONCE!"
Which is silly as Vergil's family has been dealing quite peaceably with bears their entire lives. I guess it's a little like people seeing pictures of the alligators in Florida and imagining that we are all in danger of being eaten by one at any time here.
That only happens occasionally.

Anyway, so then I had to text pictures of some of my animals that I took today. 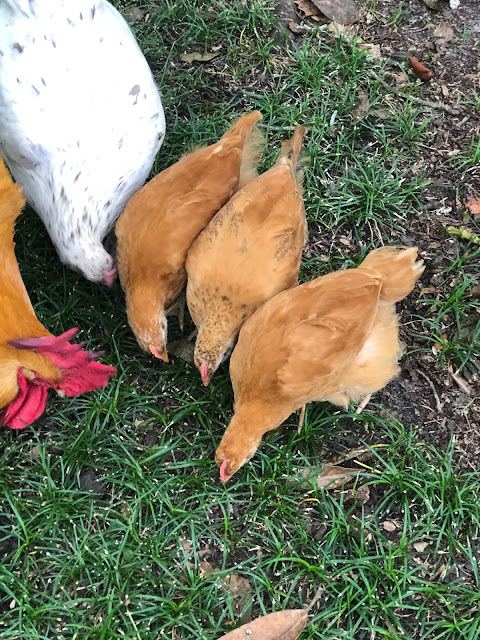 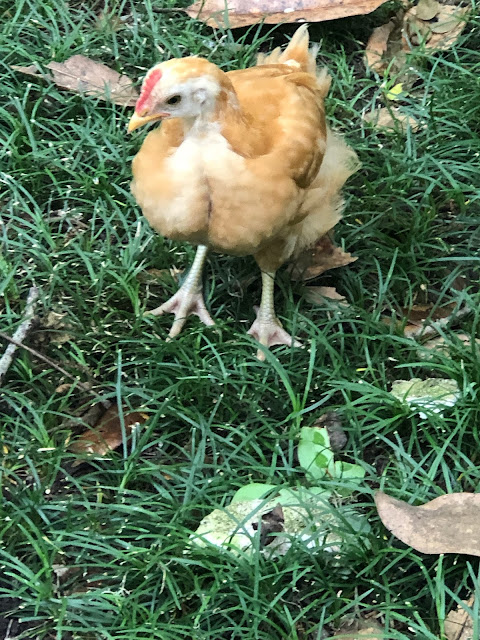 This inspired a text exchange with Hank that had me laughing so hard. 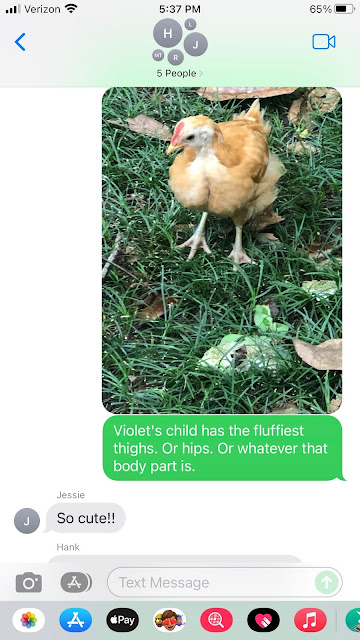 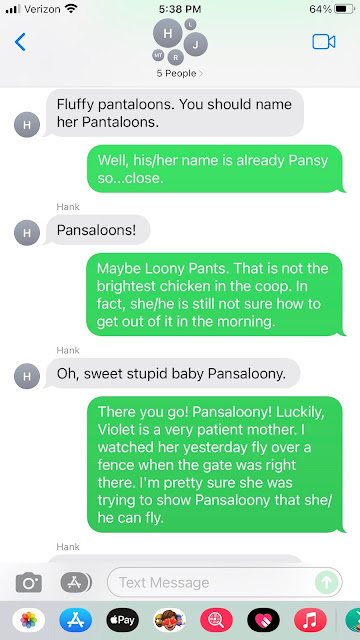 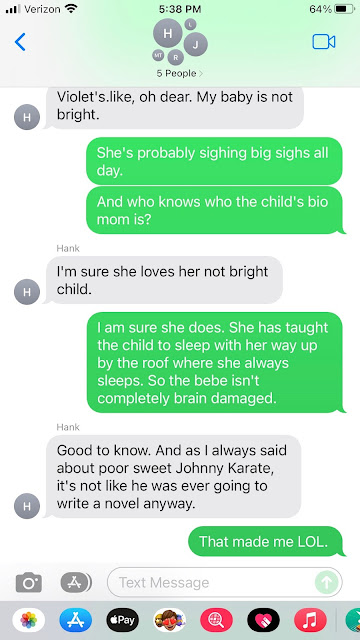 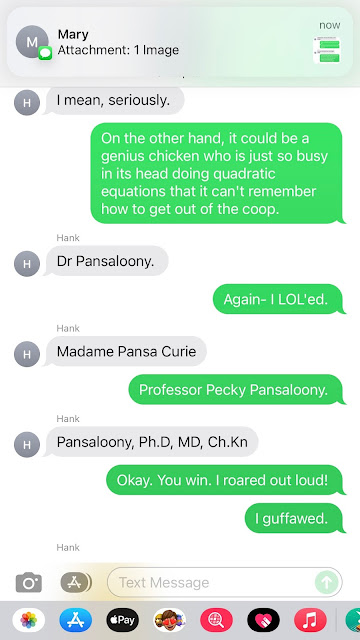 "Johnny Karate" was a cat of Hank's who was very sweet but who honestly and truly did have some sort of brain damage. But Hank adored him and took such good care of him. Johnny's buried right next to Pearl, our dear and deceased old boxer dog who also was not the brightest animal in the kingdom although I guess she was a genius compared to the other two dogs we had the time whom some of you may even remember- Buster and Dolly.
Bless their hearts.
So there you go. That's all the news here. I was going to drive down to the river and jump in to cool off after my weeding but the thought of putting on a bathing suit made me want to die so I did not. I took a shower instead which is really a very poor substitute but adequate under the circumstances.
I believe I will go snap some green beans now.
Love...Ms. Moon
Posted by Ms. Moon at 6:35 PM