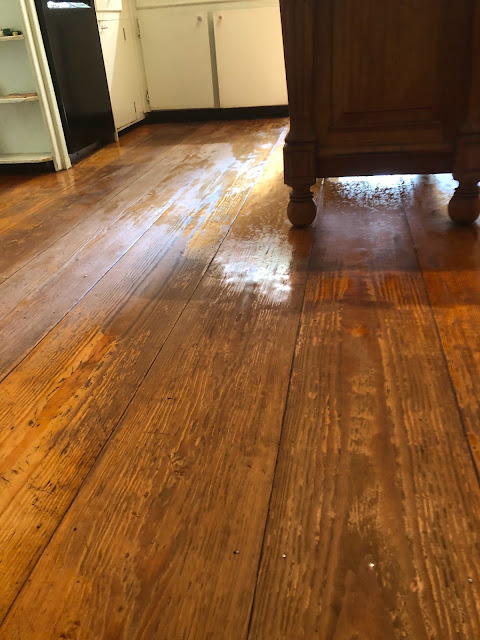 Well, there you go. And you honestly can't even tell that it's been mopped, can you? That's because those are naked pine boards whose grain has been worn down over the years. Not the years of this house- the floors in the kitchen are relatively new. And they're modern pine, not the very, very old pine that the floors in the original part of the house were made of which is almost as hard as cement.
Not only do they not make 'em like they used to, they can't make 'em like they used to because we've used up all that truly beautiful old growth wood already.

So I find myself alone this evening. Mr. Moon has gone to the coast to fish for two days. I think it's snapper season. Or something. And as you know by now, I do not mind being alone and besides that, I won't be tomorrow as the Lily Crew will be back over while Mama is at work. I have no idea what's in store as for activities but I do know that we ain't gonna be outside. 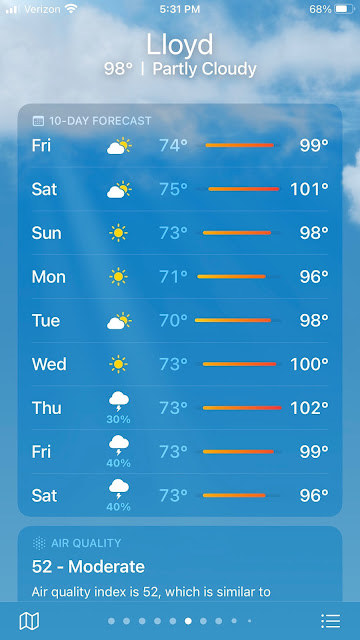 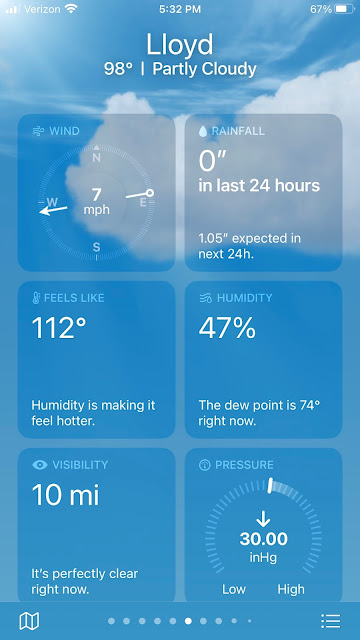 Once again I tried to get out for my walk earlier and I did, but it wouldn't matter if I walked at five a.m. It just feels like a blast furnace outside no matter the time of day. See that "feels like" temp?
I remember when I used to live in Denver and during the winters I was in a constant state of anxiety because what if all the electricity suddenly went out? We would all die of the cold. Or at least that's what it felt like. Any available wood, up to and including furniture would have all been burned in a week. Being so unused to living in such a cold climate, I truly did worry about that a lot. I always said that I'd rather be hot than cold because at least if you're hot, you can find a way to cool off- generally involving water to immerse yourself in- but lately, I've been having similar anxiety about this heat and what would happen if we lost electricity and thus, our air conditioning.
Have you ever heard of "wet-bulb" conditions? I had not until a few days ago. According to an article in Vice, this is what wet-bulb conditions are:

"Wet bulb temperature is the point at which humidity and heat hit a point where evaporation due to sweat no longer works to cool a person."
And then they die.
I feel certain that we are going to be hearing a lot more about wet-bulb and that is not good news in any way. Even the name sounds horrible.
After my walk today I have about decided that there is no way that the benefits of that sort of exercise in this heat override the real danger of heatstroke. I literally get a bit nauseous and I'm not good for much else the entire day. Forget the garden. If I get things picked, it's a miracle. The thought of kneeling on that hot dirt and weeding is overwhelming. I forced myself today to hang clothes outside and while bringing them in a little while ago, I had sweat coming off me in sheets. Not drops. Sheets.
But how in hell can you rationalize using a dryer in the house when clothes pinned outside will dry in an hour? My air conditioner which was new last year (I think) is struggling to keep the house cool. And I live under trees which provide deep and lovely shade. Still- it makes little difference.
I spent a few hours today on the couch, knitting, watching the January 6 congressional hearings.
First of all, can I say that I love Rep. Bennie Thompson, the chairman of the committee? I could write an entire essay on why that is but for now, I'll just say that he looks and sounds like the sort of man whom I've always thought of as wise and kind and highly principled. I am so glad that he is there, asking questions, being attentive, keeping track, being the voice of decency and law.
Liz Cheney is brave. No way around it. As most of her fellow elected Republicans have lost any molecule of spinal matter they may have ever had, she has stood strong.
After today's testimony, I suppose I could say that I'm surprised at how Pence withstood the pressure that Trump put on him and how brave he was to stay within the Capitol confines during the insurrection so as not to be seen as running from his responsibilities but too little, too late in my opinion. How he can call himself a good Christian and a man of moral belief after four years of knowing what he knew about Trump and sticking with him, is beyond me.
Still. Thank god he did.
As I watch these hearings I keep hoping that Trump supporters are watching them too but I doubt they are. For one thing, Fox News isn't covering them. For another thing, I know that when humans who have believed so fiercely in something, whether a religion or a political party's lies, are incredibly loath to seek the truth about them and if they ARE presented with those truths, often double-down on their beliefs out of an unwillingness, I suppose to admit that the things they've so fervently believed could be false, thus in a way, making great parts of their lives a lie.
They/we just dig the holes we are hiding our heads in deeper and deeper.
But I will say that if Trump doesn't end up in prison, history will not be kind to us.
Well. I need to go put the kitchen back together. The smell of Fabuloso and white vinegar is strong and of course that always makes me happy. I did two moppings although three or four would have been more appropriate.
Ah well.
Love...Ms. Moon
Posted by Ms. Moon at 6:41 PM