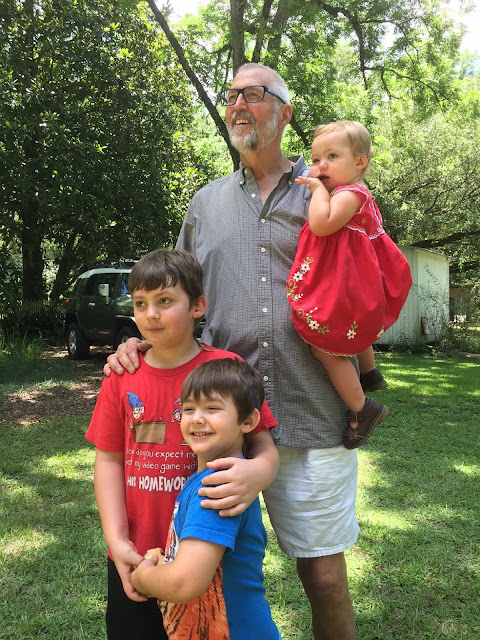 That picture was taken a few years ago but it's a darn sweet picture and I love it and there you go. The kids are still sweet, albeit larger now and the man is about the same size and also still sweet. We all know that marrying Glen Moon is the best thing I ever did, not to mention the smartest and we all also know that my love for him just gets stronger with age.

It's funny. I scroll through Facebook on Father's Day and see everyone's pictures of their fathers, their daddies with words describing their love for the men who have loved them from birth and I suppose I could feel sad because I certainly never had a father or a daddy who'd I want to post a picture of. And I don't have much to say about my bio-dad. I do have a lot I could say about my stepfather, but it's nothing Hallmark would want to put in a card.

Unless they started a line of "Thanks For Fucking Me Up Forever" cards which may be something they should consider. I imagine there's a large market there.

But no, I just look at all the loving posts and think, "Wow. People have fathers they love! Amazing! Wonder what that's like?"

Of course Mr. Moon's kids love him and so do his grandkids. They adore him, in fact. As well they should. He's steadfast and truthful, he's loyal and loving, he's dependable and always there for them. And the older he gets, the worse his dad jokes become which is pretty charming, actually.

When I met the man, he courted me with great enthusiasm. I realized within a week of knowing him that he was going to ask me to marry him and although I know he was obviously bewitched by my then-charms, I think the main reason I fell into the marriable category was because I already had two kids and he was ready to be a dad.
I knew a good thing when I saw it but was understandably hesitant after my experiences with men, including my so-called fathers and also, I was not long past a divorce.
But he put the full court press on me and before I knew it, he had invited his parents and sister and brother-in-law and their two kids to come and stay with us (no pressure there, right?) and for us to go to the beach together for a few days and after meeting his mom and dad and sister, too, I knew that his qualifications as a family man were stellar and sterling and I let my heart grow softer for him and next thing I knew we were standing under an oak tree in a downtown Tallahassee park and Bill Wharton was singing "Cadillac of a Woman" and I was saying, "I do."
And I did and I have and I will for as long as I am allowed.
Eleven months after we were married, we had Lily Rose Moon and he had started a business to support us all and, well, it was crazy times. But throughout all of it, we both had the overall goal of being a good family, I think. We had our moments when it became almost overwhelming. I look back now and have no idea how we did it and at the same time, managed to carry on a romance that lasts to this day.
I sure am glad we did, though.

So today has been very laid back. I made us a big breakfast and then he got all his fish packed up to freeze except for a nice piece of grouper I'll cook tonight. I made his dessert and actually managed to get a little bit of weeding done and picked enough green beans to pickle at least eight quarts tomorrow. I think. I gave him the silly gift I got him in Monticello a few months ago. 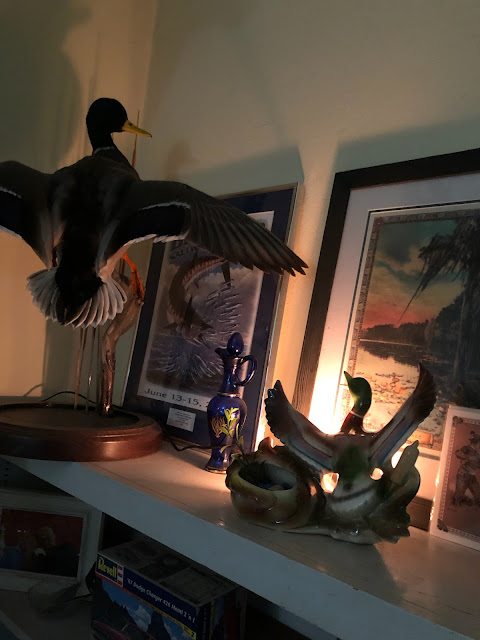 On the tag it said, "Duck Light with Extra Long Cord."
It was that extra long cord that convinced me to buy it.

I may not have won the lottery when it came to fathers of my own but I surely won the big one (hey! no pun intended) when it came to finding one for my kids who has managed to put up with my crazies for all these years and given me the life I never imagined I could possibly have.
I have to say that I've given him some pretty great kids, though. And grandkids, too, obviously.