From the moment I woke up I felt as if it were a Sunday. No idea why but I did.
I had planned to make (finally!) Hank's birthday shrimp salad and take it to him and that is what I did. I kept waiting to see if we were going to have a family gathering for the event but it would appear that we will not be having one of those any time soon and I had promised a shrimp salad and a shrimp salad I would make!
This is the shrimp salad that I have spoken of many times. It is Hank's usual request for his Mama-Made birthday meal. I did not take a picture of the one I made today but here's a picture from a post I wrote last year. 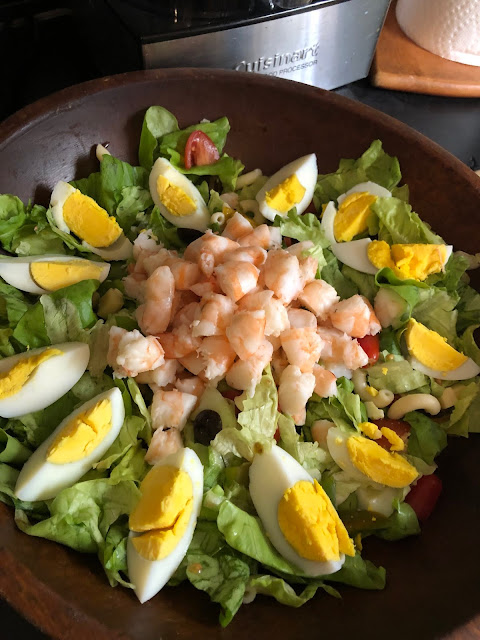 The one I made today was that one's almost-identical twin. It is a lovely meal and one of Mr. Moon's favorites too.

Speaking of Mr. Moon (and seafood) here's a picture he sent me yesterday. 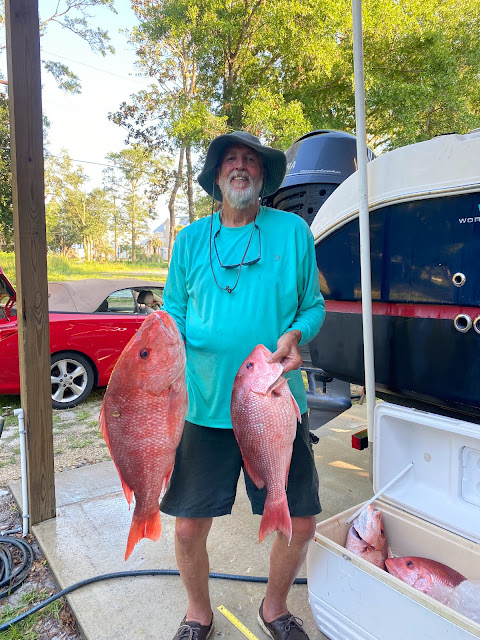 So I would say that yes, fishing has been going well. I haven't heard from him today but I think he's coming home tonight. I know he'll be just as exhausted from fishing as he was last weekend after working at Dog Island. That man works hard and he plays hard, too.
Anyway, I took the salad into town and delivered it to the post-birthday man and then went to Publix because I had a few things to pick up like whipping cream and chocolate to make the Father's Day dessert that Mr. Moon loves so much. This, too, I have written about. The original recipe calls for all sorts of horrendous ingredients including instant chocolate pudding and Cool Whip. Now you know that nothing like that will ever come from my kitchen while there is breath in my body so I have re-invented the dessert, making my own chocolate custard and whipped cream, etc. As I have said before, I have told my children that if I should die and their father remarries, they are to show the recipe to the new wife and tell her how much their father loves it. HOWEVER, if they do not like her, they are not to tell her how I made it but just let her blunder along with the Cool Whip.
That's mean, isn't it?
Oh well.
I ran into my next-door neighbor at Publix today. This is the neighbor with Trump signs still in the yard. I wanted desperately to ask her if she'd been watching the hearings but for the sake of peace I did not. I doubt she is and even if she were, she wouldn't believe them. So we spoke of chickens and goats and the heat. Everyone is talking about the heat right now. I think it got up to 100 today and I've hardly stepped outside except to get in the car. I do not know how the chickens are tolerating it but they are. They are so hardy, surviving temperatures like these and also the freezing temperatures we do sometimes get in winter. They have my respect in so many ways. Of course, they really don't have much of a choice when it comes to surviving weather. I suppose they could just die but that's not how life generally works, is it?
The man has just called and is finishing up cleaning a huge snapper and will be home in awhile. I think that his Father's Day may mostly be spent in his chair with a fan on him. If I have anything to say about it, it will. He is stubborn, though, that man.
Obviously, I don't really have a damn thing to talk about so I will close here and go risk heat stroke by picking basil for tonight's supper. I will also go see if my poor hens have laid any eggs today. They may well be hard-boiled by now if they did.
Love...Ms. Moon
P.S. I feel I must be honest with you- I love instant chocolate pudding. As I recall, anyway. I haven't eaten it in years but have fond memories of it. Not unlike Kraft Macaroni and Cheese it is a food (theoretically) that is best never eaten but if it is, I'll enjoy it. As Lily would say, "Not gonna lie." What the hell's the point?