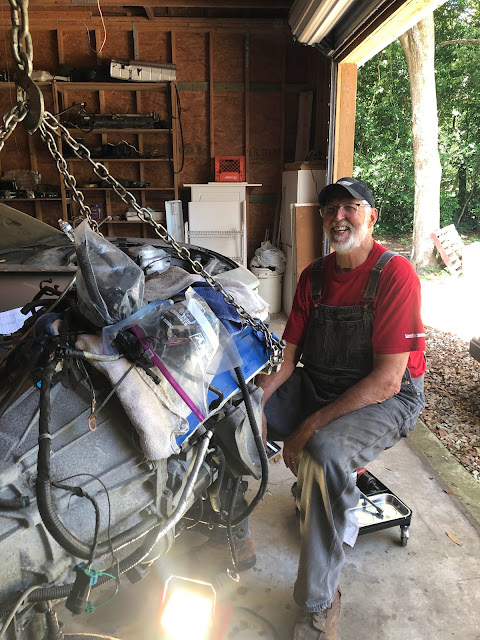 Today my husband changed from his carpenter hat and into his mechanic hat. I had to take this picture of him in the garage. He is so happy. He is a man of so many talents.

Lis and I had planned to go to Costco today for her to buy a membership and I, trying to get the kids together before Jessie leaves for NC on Saturday, wanted us all, or as many as possible, to have lunch in town. I thought that Jessie and May and August and Levon and Lily and her three would be able to make it and plans were unfolded and after everyone but Lily and her crew had gotten to the restaurant, we realized that she had thought we meant tomorrow and could not make it today.
Sigh.
But we had a good time anyway. 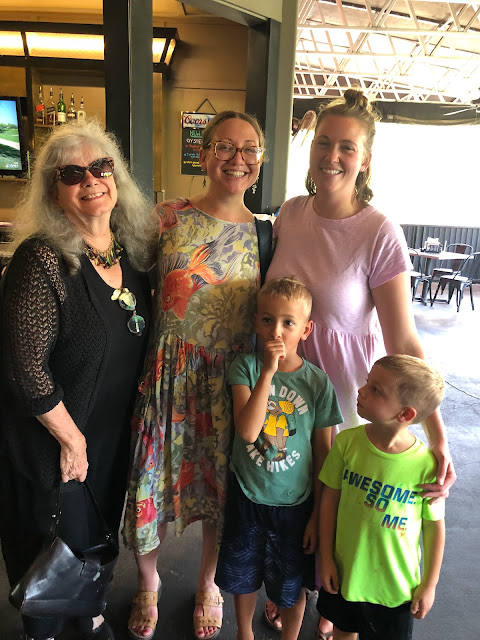 No. August has not taken to sucking his thumb. He is trying to be a butthead and ruin the picture. Or be funny. Or something. As you can see, Levon is mystified. Oh, August! I told him that I was going to miss him so much when he's in North Carolina but that it will make my heart happy to think of him running up and down the mountain, playing with his cousins and visiting with his grandmother.
"You're going to be there for a week," he said, as if pointing out the obvious.
Oh well. That will make it all better.
He also asked me to order him a hamburger sandwich.
Hamburger sandwich? Really? Who is this child? What ancient old man is he the reincarnation of? Levon asked for macaroni and please. He found this very amusing.
I will tell you that when Lis and I got to the restaurant, August voluntarily hugged us both which is pretty huge for that boy. And melted his Mer's heart even more.
Lis and I did go to Costco and she joined up. I bought a new blender. Of course there are about ten different parts to it and I just can't bring myself to try and read about it all right now. Everything feels a bit daunting to me this evening. I've had a few gentle epiphanies and am pondering them, as I do. One would think that by the age of almost-68, a woman (or a man, for that matter) might have most things figured out, at least as applies to themselves and their ways of being. On the way home, Lis wanted to go by a much-beloved place out in the country to buy their famous sausage 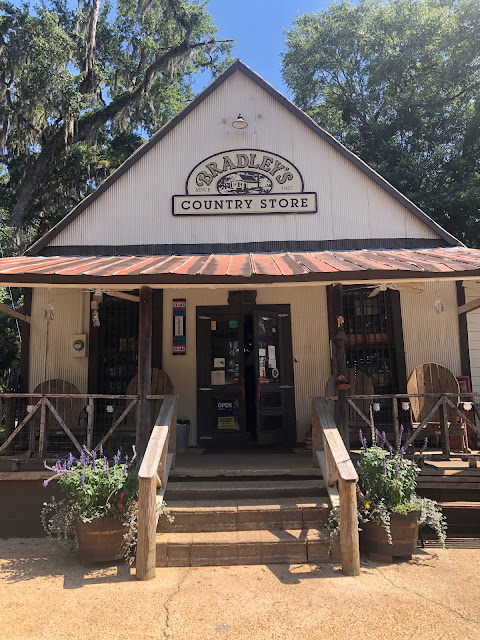 and as we drove down the canopy roads, shaded and green, so many emotions rose up within me. I was grateful to be with Lis because I could talk to her and listen to what she had to say. She is wise.
We are going to meet up one last time before they leave tomorrow at the Mexican restaurant in Monticello. Two outings in one day!
Call Ripley's.

It's hot. It's summer. But at least we've had good rains and it's not yet dusty and dry. I picked two eatin' sized green beans off the vines a little while ago and I reckon that by the weekend, we'll have plenty to make for a meal. They will be so good with the potatoes that we grew.
Lily and I are talking about meeting up at the Wacissa tomorrow and that sounds like a sort of glory-heaven. It is a comfort to me, just knowing that the cold spring-fed river is there, a few miles down the road and going there and cooling off in it, sitting in the shade of the big cypress right by the water and talking to a daughter or two, watching grandchildren playing and splashing and swimming is glory-heaven fulfilled. It is no wonder that so many Christians believe that to be born again requires a complete dunking into a river. I have experienced that rebirth myself so many times in so many different bodies of water, some holding fresh water, some holding salt. It is not exactly the sort of rebirth that churches preach about but one that works for me whether in the presence of trees or of waves or of cement lions, spouting water from the four corners of a pool while huge stalks of bamboo knock gently together in the breeze like celestial wind chimes while the San Sebastian River flows gently in its gentle silty way from Atlantic to inland, from inland to Atlantic as the white egrets fly over, headed to their roosting tree.
Sacred, all. No blood of any lamb whatsoever need be involved.
Love...Ms. Moon
Posted by Ms. Moon at 6:35 PM