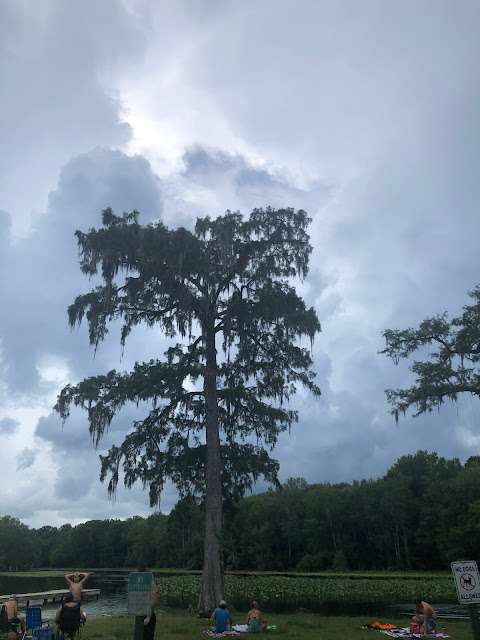 It's been a rather low-key birthday for Mr. Moon. By the time I got up he'd already gone to the gym and didn't get home until hours later as he had errands to run in town. That gave me time to make the frosting for the cake.

By the time he got home Lily and Lauren and the kids had already left their house for the Hilltop where we had decided to meet and get lunch so we hurried into our bathing costumes (I love to use that phrase) and and gather towels and the cake and got in the car to drive down the road for lunch. They weren't too far ahead of us in ordering so we were all able to eat together and thankfully, the flies weren't swarming the picnic tables outside but it was blue-blazes hot and if there's a garment that's hotter and more uncomfortable to wear in the heat than a lycra swimsuit, I don't know what it is. I had a cotton gauze dress over it but I was still dying. Or at least I felt as if I was.

After lunch we all headed to the river and when we got there, the sky was already growing dark and ominous the way it so often is on summer afternoons. Mr. Moon and I arrived first and knowing that our time might be cut short we both dove in immediately and as I said when I surfaced, "Every time we do this it's a life-changer."
And it is.
The relief is just so incredibly instantaneous.
Then the Hartmanns showed up (Lauren had to go to work) and it wasn't fifteen minutes before lightening started flashing and thunder started rumbling to the southwest. We debated whether to just leave or wait awhile to see what was going to happen, the radar was consulted and still no consensus was formed although Magnolia June was convinced that not only should we stay but that she should be allowed to play in the water (we had called them out when the lightening started) and that other kids were still playing in the water and it wasn't fair!
I wonder how children all seem to be born with this innate sense that life should be fair. I mean- even by the age of two, it should be apparent to a child that life is frequently NOT fair at all and by the age of six one would think that we would all accept that fact as plainly as we accept the fact that french fries with ketchup are delicious.
But no. We do not. And Maggie REALLY does not.
(Her mother didn't either at her age but I think she's aware of the fact now.)
We decided to go ahead and eat cake, however, and we all sang happy birthday to Boppy, and Owen and Maggie didn't want cake because of the coconut in it but Gibson, Lily, Glen, and I surely did enjoy it. German chocolate cake is just a damn fine cake.
About this time a little girl, perhaps three or four, ran smack dab into a wooden sign post while playing and she hit that thing so hard with her sweet little noggin that the metal sign attached to it shivered and rang, and everyone at the river stopped what they were doing and we all waited in silence to see what would happen. She let out a huge wail- the sort of wail every parent knows means "this is serious" and her daddy grabbed her up and set her down on the floor of the back of the van to see what she'd done to herself and she was crying, "Is it bleeding?" so at least she hadn't knocked herself out. They put ice on her head and her father picked her back up and continued to hold her and try to comfort her and I know that everyone at the river wanted to do something to help but what could we do? There was another family with them, and everything was being taken care of but it felt so unfortunate. When I walked back to the car with our stuff a few minutes later I saw she already had a bruised-looking lump on her head that was as big as half an egg. I am still thinking about her, obviously, wondering if they took her to a doctor. I know that kids' heads are hard but I guess having been a nurse I still think of terms like skull fracture and subdural hematoma.
I think for me, one of the hardest parts of being a parent to young children was not being sure of when it was the right thing to do to take a child in for medical help and when not to. All of us who have children remember this conundrum. You do not want to be the mom (or dad) who takes their precious child in every time they get a snotty nose nor do you want to be the the one who ignores the signs of a possibly threatening bacterial infection.
Does this wound need stitches?
Does this bump need to be checked?
Is this rash newborn normal?
Is this a virus which will pass or an infection that needs antibiotics?
Does inhaling Mexican baby powder constitute a possible medical emergency? (Asking for a friend.)
Back in the olden days, we had no internet to check things out before making that decision but we did have Dr. Spock and I don't know what I would have done without him. I remember diagnosing one of my children with an inguinal hernia and taking her to the doctor. I told him what I suspected (based on what dear Dr. Spock had told me) and he was impressed with my diagnostic skills.

Anyway, what in hell was I talking about?
Oh yeah. My husband and his birthday.
I wonder how many words I've written here over the years talking about what a good man my husband is and how grateful and fortunate I am that I caught his eye that night back in 1983.
In a bar.
Wearing my friend Sue's sweater.

When I got up this morning I found a note from him in front of the coffee pot. It thanked me for loving and nurturing him the way I do and gave me the credit for him living to the age of 68.
It's funny how we love and how we express love changes as we age. And it may be even funnier how those things don't change in some ways.
In the river today we hugged and kissed each other and I thought about how some of the younger people there probably thought either, "Ugh. Really?" or "Oh, isn't that cute?"
You know what?
I love his hugs and his kisses as much or even more than I did when we were both twenty-nine. Each one of them is precious.
He is precious.

Here's a picture of him and Ms. "It-Isn't-Fair" Magnolia June three years ago. 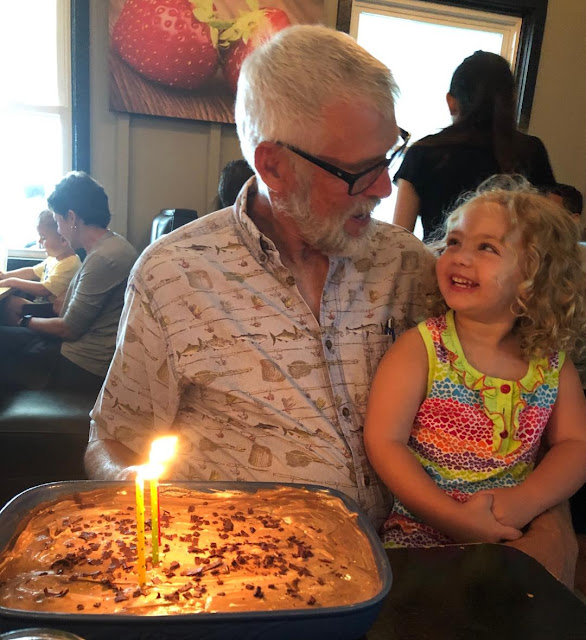