Warning: Profanity Ahead, Plus Bitching Galore 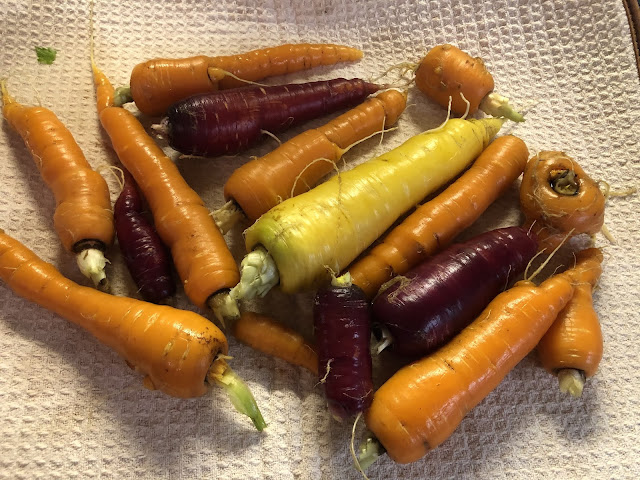 Well, there's the rest of the carrots. I pulled them all except for one that had what I think was a monarch caterpillar on it. They're in a bread bag in the refrigerator right now. I cleaned out that refrigerator today. I didn't do the kind of clean-out where you take everything out including the shelves to wash them all down and then put them all back in and reorganize everything. But I did take everything out, shelf by shelf, and wiped the shelves down and I threw out a lot of stuff.
I was in the mood to throw out stuff. I've been in that mood all day. It's an angry, bitchy mood. Everything is frustrating me. Why do these moods suddenly come upon us? I sent the kids a picture of the rug in the Glen Den and wrote, "I can't take this thing for one more week."
And I meant it. It's the most hideous rug you've ever seen. It wasn't so bad when we bought it. It was stain-free at that time, of course, being brand new and I cannot imagine that I would buy a rug made of such horrid colors so obviously it's faded or something. It's now a sort of beige with highlights of brown and orangey brown. If I've said it once, I've said it a thousand times- LIFE IS TOO SHORT FOR BEIGE! And brown? Well, there are some rich browns that don't offend me but these are not those. I won't even comment on the orangish shades.
Ugh.
So- rug buying is back on the agenda because I AM going to throw that motherfucker away. I would not even insult anyone by asking if they wanted it.

I was going to clean out the hen house which desperately needs it but the cart I use was filled with potato vines and I didn't have the energy to call Mr. Moon, who was in town, to ask what he wanted me to do with them. I would rather just be slightly pissed off at the inconvenience than actually do anything about it so it's still filled with potato vines and the hen house is still poop-filled. Rather unbelievably, I did not throw any of Darla's precious eggs away. Lucky for her, or maybe unlucky for her, depending on how you look at it. I did take her off the nest and set her down beside it and went through all of the eggs and removed the ones that I hadn't marked. Three since yesterday. Dang hens. As Mr. Moon said, those other hens are saying, "Since you're already on the nest, let's make it worth your while."
That's exactly what they're thinking although probably not really because I'm not sure chickens think that way but that's what their instincts are telling them to do.

I really don't know shit except when it comes to chickenshit and that I DO know when I see.

It's rained on and off all day and that too has been frustrating because we need real rain. The kind that comes and stays, not the kind that flirts and leaves. A steadfast rain. A faithful rain. A loving rain of adequate proportions.

I did do some sewing today but not on my dress. My husband showed a mask that I'd made to a friend of ours and she admired it and so of course he said that I'd make her one. So I did make her one but it's too big for a woman and that was frustrating too. I started over with a smaller template but I haven't finished it. The pattern is so easy that after I start one I think, "Oh man. This'll be done in fifteen minutes!" and then for whatever reason, an hour later I'm thinking, "Shit. I forgot to put the nose wire in."

Now see? This day has not been any different than any other day. These are the sorts of frustrations that we all encounter daily. They are just life. But today I have taken every one of them personally and cursed myself, the universe, the colors brown and beige, and a few other things and beings that I am not going to name here. 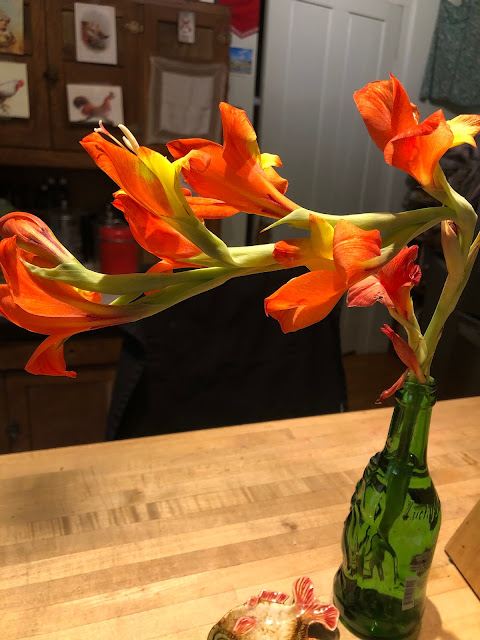 I have a few gladiolas blooming and this one had lost its will to stand up and had fallen over so it was all bent up and I figured I might as well pick it and bring it in to admire and enjoy. So I did.
Of course I'm a little bit pissed that the darn thing laid down on the job. What the hell, gladioli? You had one job and you blew it!
Okay. Not really. Its main job was to bloom and it did.
I can't really think of anything else to bitch about.
Oh wait! Another Adventure in Aging!
I'm wearing a giant bandaid on my right arm because yesterday, while the boys were here, I was scurrying around, heating up spaghetti and I left the door to the microwave open and then ran into it with my arm and because my skin is ancient and I've spent my life in the Florida sun, it just peeled back and bled.
And this is the part where I feel compelled to list all of the things that despite my frustration and general pissed-offeddness, I am so very, very grateful for.
Yeah. You've heard that list before.
And I still am incredibly grateful for all of them but fuck it.

It's just one of those days. We all have them. I guess I'm just leaning into it and sitting with it. And by the way, those two phrases make me want to punch someone.
Love...Ms. Moon
Posted by Ms. Moon at 6:20 PM