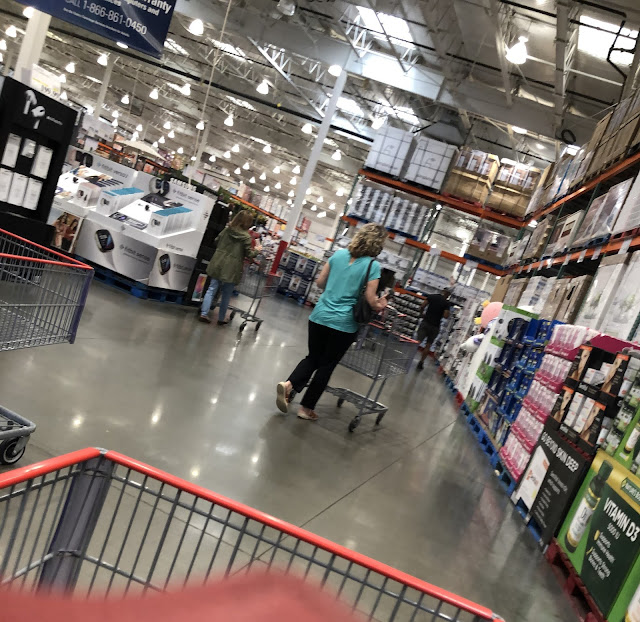 I took this picture by accident and it's the only picture I took today so there you go. As you can see, I was in Costco. I did not have a very long grocery list today but as I said to Jessie in a text, "I need what I need," and I did so I went ahead and shopped. Tomorrow I'll be in town again because I am going to go with Jessie when she takes the boys to the doctor for their next year school exams. I think that's why we're going. Whatever. I'm going to go so I can help wrangle and corral those two wild cowboys of hers.
They're not really that wild but two boys getting exams at one go can require extra help.
AND...
We're going out to lunch before the appointment! We're going to El Patron where we haven't been for over a year and we'll sit on the deck and eat chips and salsa and be reminded of what life used to be like. I'm sure they've missed us.
So that is going to be hugely exciting.

My goal today was to get the shopping done early and come home and sew. Haha! I didn't get the shopping done THAT early and when I came home I realized that if I wanted more mulberries, I was going to have to pick them. So after I put away the groceries and ate my lunch I went out and picked for quite awhile. By the time I'd finished it was four o'clock and that was too late to start jam so I got a little bit done on my dress but not much. I got stuck making pockets. The pattern calls for pockets on the front of the dress but I want to make side-seam pockets. Big ones. So I used another dresses' pockets as a pattern and I know damn well how to make this work but I have never had any spatial ability and it's getting worse all the time and I just didn't have the patience to sit there and figure it all out. I know I can do it and I will but I finally just turned off the machine's light and made a cup of coffee.

Our weather here has been, if not abysmal, then at least a little miserable. The air is as full of water as if it were pouring rain but it's not pouring rain. We're just getting a little drizzle now and then. Yesterday I woke up and the ribs that I broke last July were aching. I've felt them a bit now and then before it rained since they've healed but this was significantly worse. I texted May to ask if her leg hurt. She broke it badly in high school when she was hit by a car (yes- a mother's worst nightmare, god almighty, I can't stand to think about that day) and she said that yes, it was. We discussed the fact that we should get barometers to see if there's a definite correlation between atmospheric pressure and pain from former fractures.
Do any of y'all have thoughts on this? Experiences?
The only other bone I've ever broken was a wrist and it hurts or bothers me, at least, all the damn time so I can't really use that to judge the effect of the weather on it.

So. I do believe that Miss Dotty is sitting on a nest now too. At least she was sitting on one when I went to gather eggs and when I reached out to stroke her, she appeared to be in that broody near-coma. Darla's egg count is up to about thirteen now and that is enough for one hen.
Listen to me- like I know how many eggs a hen should be allowed to sit on. If there's one thing I've learned about chickens, it's that the less I interfere with them, the better off they are. But dammit! Humans just do like to think we know how shit should be done, don't we?
Since we can no longer define humans as "the toolmakers" due to the fact that we are definitely not the only ones to make and use tools, perhaps we should just call ourselves "the opinionated ones."
But then again, cats are about the most opinionated creatures on earth as far as I can see so that probably wouldn't work either. Or perhaps they are simply judgmental which Jessie tells me I am and I always say, "No I'm not. I'm just opinionated."

She's probably right but then again, that's just her opinion.