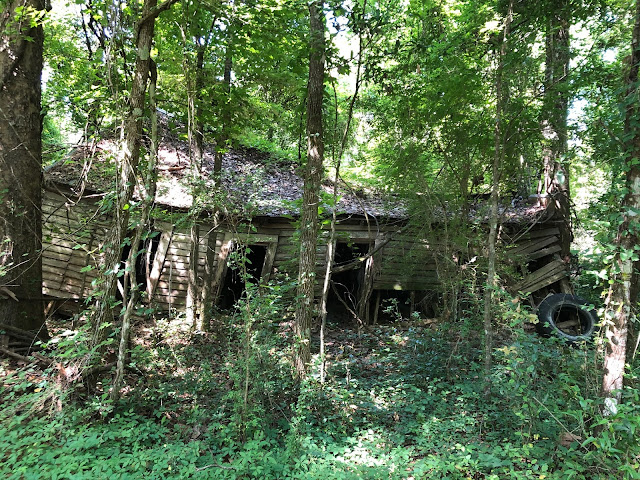 I took a walk today and although I started to turn left outside my driveway and go down the sidewalk towards the county line, I changed my mind when I saw someone walking that way already, about what would be a block away if we had blocks which we do not, and I knew that I would overtake him if I walked in his direction because he was just taking a walk, not walking fast to get it over with the way I would be, and I don't like overtaking people on my walks because it's awkward, trying to alert them that you are there, behind them, and so I just turned right instead and went that way. I decided to go by the fally-down house because I have not done that in a long time and so I did. Its bones are crumbling, it is getting closer to the ground, its floors would no longer support a person trying to discover its secrets by stepping inside through one of its tilted, crooked doors. It is closing in on itself, hiding its secrets, its memories, what stories it may have to tell. Do you remember when I wrote about the fally-down house here?

Over the years I've written more about this old place, taken its picture, charted its slow giving-in to gravity, to weather, to age, as the dirt itself is claiming it as its own, which one day it will be able to entirely do.

Steve Reed came to visit me six years ago and he wanted to go by and see the house, to take its picture. Owen and Gibson were little boys then and they were here and we four walked down the road to see the old house. 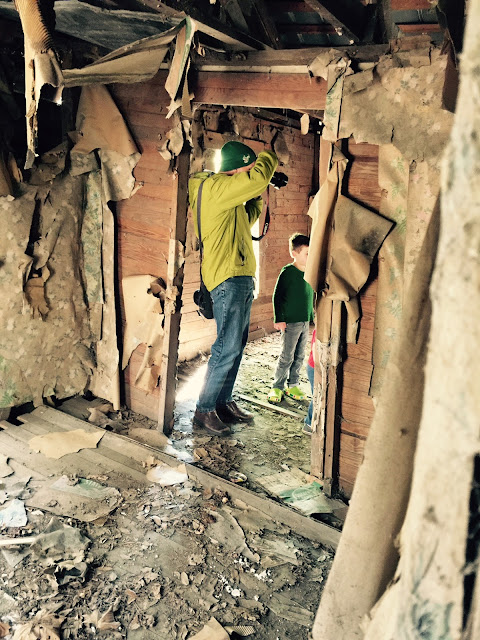 I took his picture as he took the house's picture. That's Owen back there, behind him. I feel certain that the entire time they were inside I was saying, "Y'all be careful now! Be careful!"
Steve grabbed some of that wallpaper and made bookmarks for me and a few other bloggers. I cherish mine. What a very kind and thoughtful and meaningful gift.
But that's Steve.
In 2016 the house looked like this. 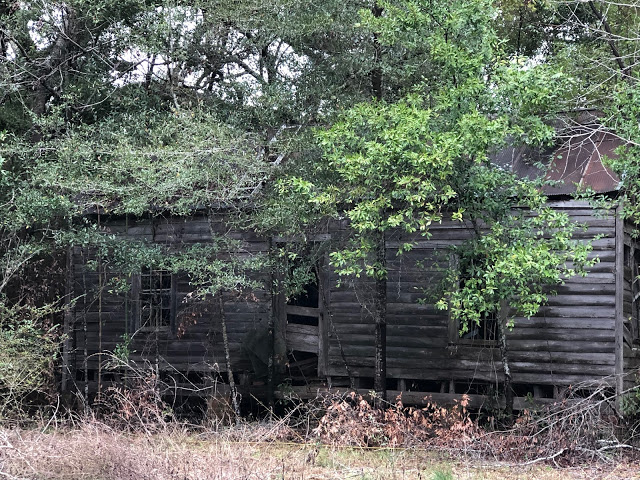 Even through the trees and vines, you can see how much straighter it was then, how it was still holding out its arm-boards like a sentinel, for the most part, remembering, perhaps, its original intent to shelter those within.
Well.
It's already so hot that my walk, albeit a short one, wore me out. I swear- every summer I am growing less tolerant of the heat. Same thing with the insects. I was bit again by yellow flies today, this time mostly on the arms as I hung clothes although I did manage to murder one in mid-bite, and I am not ashamed to admit that I felt a little frisson of revengeful delight. The mosquitoes are not so bad yet because we haven't had the rain necessary for them to have a big hatch but once we get a good storm, they will return, hungry and desperate for our human blood.
Yesterday Mr. Moon pulled all of the garlic and because we've never grown garlic before, we had to research how to dry and cure it. It has to go through that process for weeks in order for it to keep. 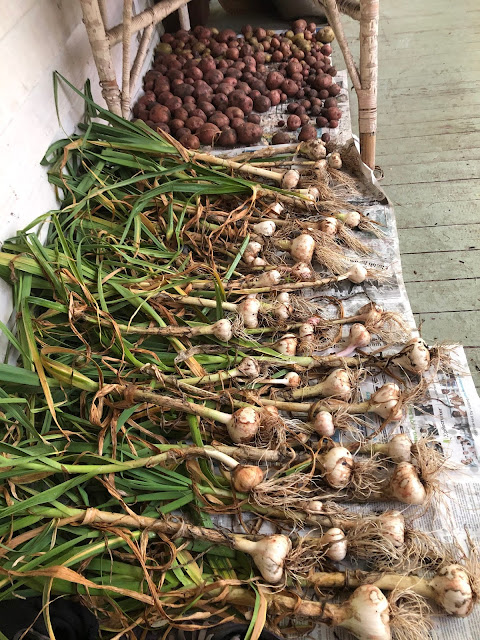 But for the meantime, my husband laid it on newspapers on the back porch next to the potatoes that we still haven't really done anything about other than cooking them when we want potatoes.
Turns out you can dry your garlic on screens or in nets or you can braid it or tie it in bunches and hang it to dry. I was a bit disdainful of the whole braiding thing.
"Do you know how to braid?" my husband asked.
"Haha!" I said. It was funny because I've been braiding my own hair and our children's hair ever since me met me and long before. But braiding garlic did not sound as easy.
Still, I decided to try it today and worked it out so that I braided three of the garlics together and when I had three of those, I braided them together, bound those braids with twine with a loop for hanging and then I hung them from hooks that we have on the back porch which I think may have once been some sort of attachments for shutters. 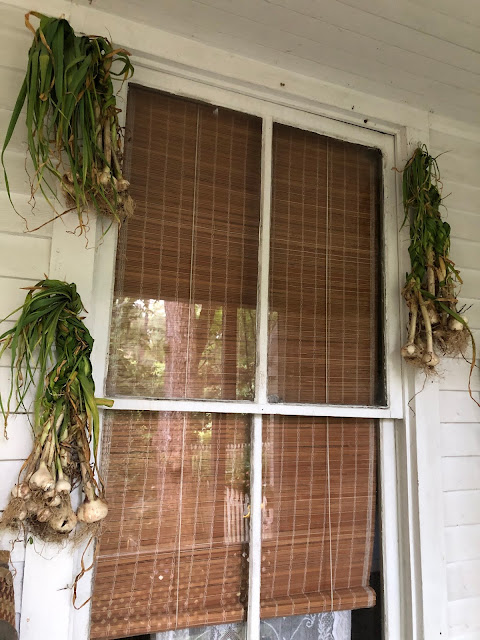 We have fans trained on them and since each bunch has nine plants and I have five bunches hanging, that's about forty-five heads of garlic. Some of the heads are huge, some are smaller. Anyway, even though I use a LOT of garlic, I think we'll have some to share.
I also picked another basket of green beans today. We've already had three meals from the ones I picked last week.
*************
Well. We just had a dog in the yard. No big deal unless you have chickens free-ranging. I heard the chickens squawking and could see them from where I sit and they weren't running around or anything so I just thought they were having some sort of disagreement but then there was a more frantic sound and I looked up to see the dog. I jumped up and yelled at him and he took off. Mr. Moon and I have looked but there's no sign of the dog and although we did find quite a few white feathers, Dottie, the only white hen besides Darla who is safe in the baby coop, is alive and well. I think it was the same dog I saw a few days ago in a fenced-in yard a few houses down. A new dog. I saw it stretched up against the fence and thought, "I sure hope that fence can hold that dog."
Yeah.
I hope the rest of my chooks are okay. 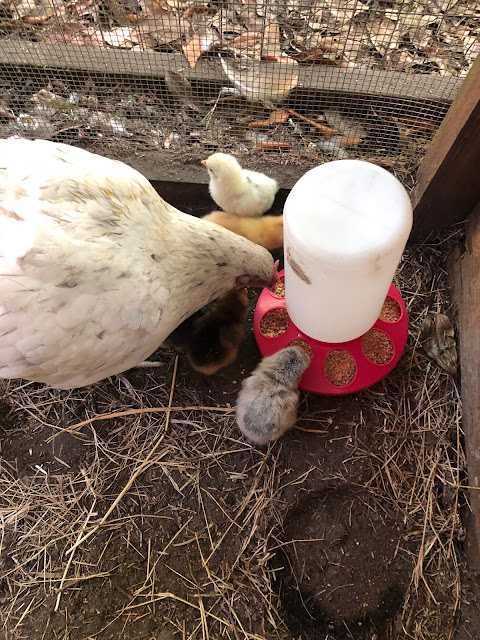 Still only seven babies. Tomorrow the rest of the eggs are going. It's been too hot and she's not paying a bit of attention to the ones that haven't hatched.
Lord, I'm tired. I feel like the fally-down house, ready to collapse. I hope I make it to bedtime.
I finished listening to this book today.