We Celebrate Our Birthday Girl 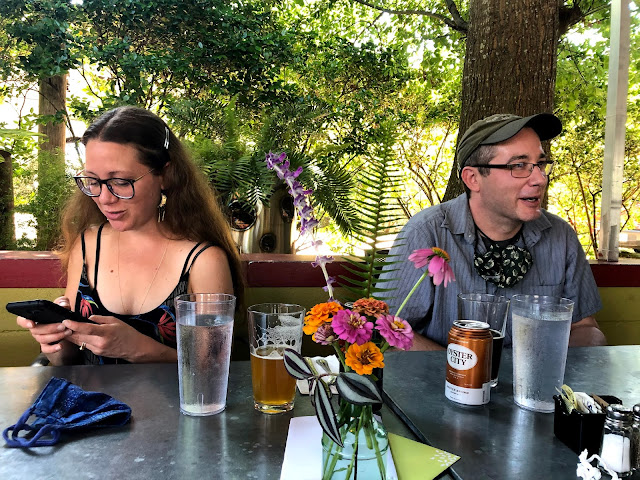 What a day! Good LORD what a day!
It was so fun. I picked up Hank at 10:45 this morning and we drove to Kool Beanz, the restaurant where Mr. Moon and I used to eat every Friday night of our lives back when we used to go out on Friday nights. I can't say for certain but I think it's the best restaurant in Tallahassee and probably for many, many miles surrounding. I should have taken a picture of the menu. Or the food, for that matter.

Soon we all began gathering. Or at least the ones who could. Jessie showed up with these two. 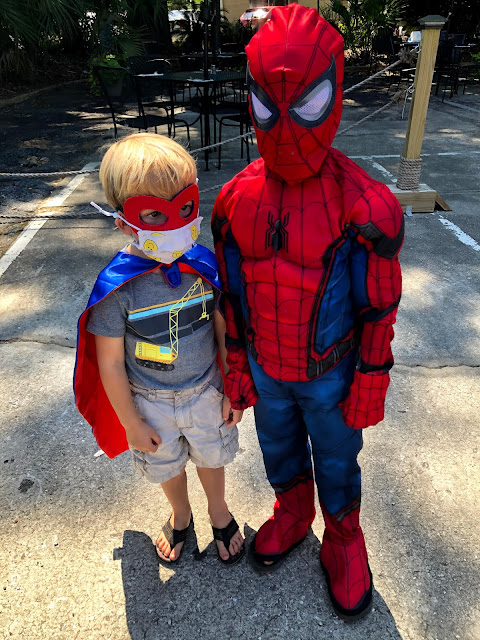 We were all delighted that super heroes joined us for the birthday luncheon. I am not sure what inspired them to don their super hero costumes but it certainly added to the festivity.
Mr. Moon came in a separate car because I was going to go shopping with May after lunch. Lily came as soon as she got off work. And of course, Hank was with me. 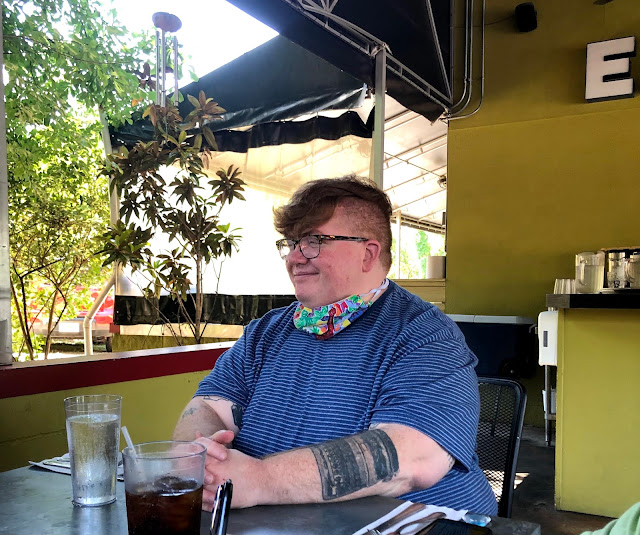 Rachel was at work in her position as an intern at Senior Services for her MSW studies. We missed her.
We sat outside and it was cool enough and not too humid and we all ate like kings and queens. Fishes and salads and some beef, too. It was heaven to enjoy that good food again. The boys were good and didn't fuss even though we had to wait for a long time. August drew Jessie a picture of a heart and a flower on an index card that I had in my purse with a shopping list on it. I had brought May a key lime pie but I told her that I didn't want her sharing it- it was all for her! This is an old tradition. I used to make two pies- one for her and one to share but this year, I just made the one. No one complained.
When it was time for us all to go our separate ways, May and I took off in my car to go to a nearby thrift store. Lily came in her car because she had to get home before too long to pick up the kids from school, and Michael took the pie home and then met us. We all found treasures. I got a set of three vintage pyrex bowls, the clear, ridged kind. Of course, I no more need another bowl, much less three, than I need another chicken. But how could I pass up such beauties? They are in the dishwasher as we speak. May found an old sewing box that was very cool, from the forties or fifties, I would say, and some wine glasses; Lily got some clothes and a pair of earrings that may or may not have been silver. I even found a pretty dress for our Magnolia and I got a little basket with a handle for her to gather eggs in when she's here.
We also found this very regal and very large chair. 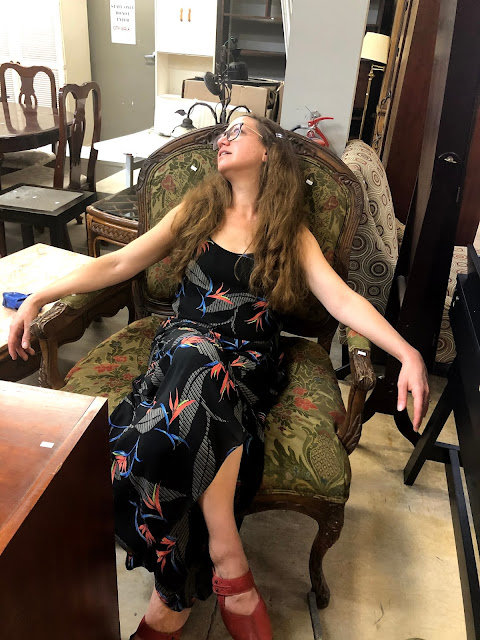 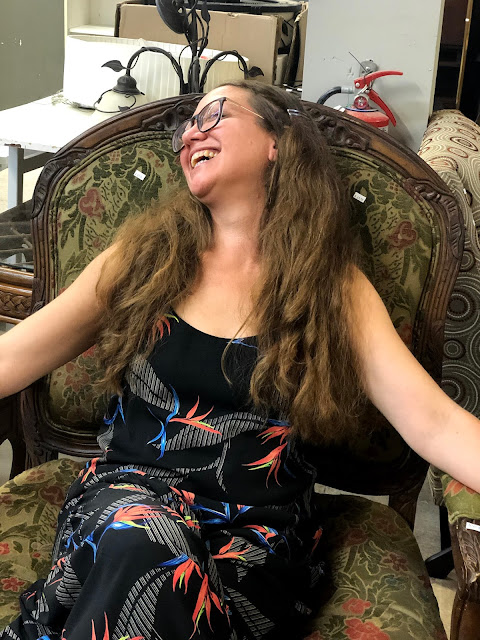 Sadly, no one bought it.
What fun to be back in a thrift store with my daughters, finding beautiful things, intriguing things, bizarre things, hideous things. Things that someone once wanted enough to buy but then either discovered that they did not really want them, could not use them, or outgrew. Or, you know- died- and their kids donated them.
I stopped at Publix on my way home and bought what is hopefully all the stuff I need for the rest of this week. Mr. Moon had gone out to check on the bebes to find that two of them were on the ground in the hen house with Darla frantically fussing over them so when I got the groceries put away, we transferred the family to the little chick coop. Still only seven. We are going to give the rest of the eggs a few more days. Darla appears to be insanely happy to be able to scratch dirt again. She was going at it so intently that she was knocking her babies over. Good thing they're so tough.
And that is what May's forty-third birthday was like from my perspective. Practically perfect. Like May herself. That woman is a glory and a goodness and a goddess. A joy and, well- a super hero who doesn't bother to wear a costume. She is the kind of person who is always kind, incredibly intelligent, and probably the best writer in the family. She's been journaling since she could hold a pencil. She's as sweet as anyone you'll ever meet and at the same time, has the wickedest sense of humor you'll ever encounter. She's a defender of those who need defending, a supporter of those who need supporting. She's a giving soul, a tender soul, and one of the strongest souls I've ever known.
There is a pureness and a light about her that is hard to describe.
And she would punch anyone in the face who threatened one of her beloveds.
She's my May.
I sure do love her.
Happy birthday, dear daughter! It is one of the biggest honors of my life to be your mama.

And hell, while we're at it, happy birthday to Bob Dylan too on this, his eightieth birthday. Obviously the very best people are born on May 24th.
Love...Ms. Moon
Posted by Ms. Moon at 6:43 PM