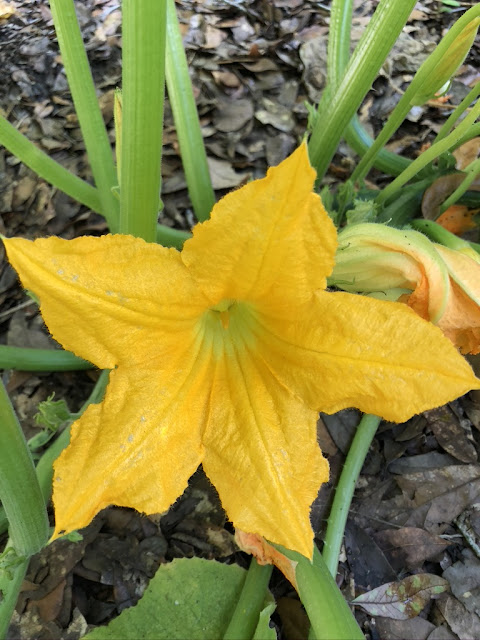 Mr. Moon and I go out together every morning to let the chickens out of the coop and take the babies out of their nursery. We stand around for awhile and laugh at Darla's frantic scratching. There is no other word to describe her frenzy. It's as if she's possessed. I think she's doing her best to uncover bugs for the babies and they search diligently in the freshly uncovered dirt. They must be getting something because they're not eating very much of their feed and yet, obviously, they are healthy and well.
After we spend a little time with the chickens, we go on to the garden to see what may have happened there overnight. For those of you who garden, you know what I'm talking about. How many of us have returned home at night after a few days away and gone into the garden with a flashlight to check things out?
This morning I took a picture of the squash blossom you see in the picture above and then immediately, a bee flew down its throat and so I took her picture too. 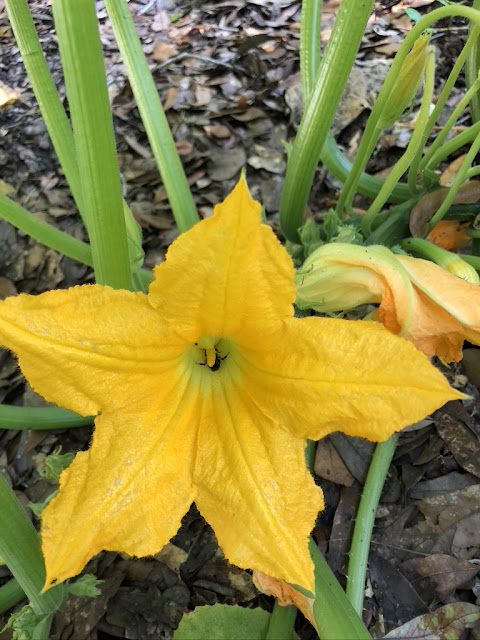 Can you see her down there?

Squash blossoms are so lovely. And so are bees.

I took a walk today and again, I walked on White House Road. I did not see Philly or her human nor did I see any humans except a few driving cars. I did notice that many of the Trump signs and banners have finally been removed although as it is Memorial Day, the Stars and Stripes were flying in great abundance.

I took a picture of a gnarled tree instead of flags, though. 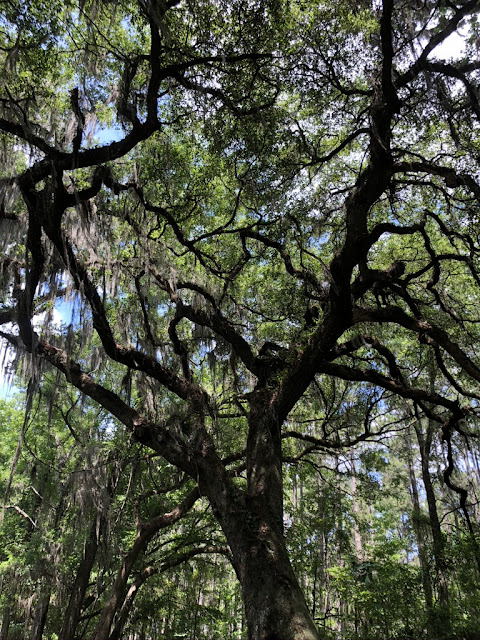 That tree has probably been here since long before the United States had anywhere near fifty stars on its flag.
When I got home, my husband was nowhere to be found. He had left the house before me to go look at a go-cart that was for sale a few miles away. "I'll be back in a few minutes," he said. And yet, after I'd been gone almost an hour he still wasn't home.
Strange.
I texted him and got no reply.
"He's fine, he's fine, he's fine," I chanted to myself.
And then I called him. It went straight to voice mail. I left him a message. "Where ARE you? Please let me know."
I hung the clothes on the line and cleaned the toilets as if trying to appease the gods with my domesticity, all the while knowing that he was absolutely okay and yet at the same time fearing that he'd been in a terrible accident or murdered or had had a heart attack or...something very grim. I can't help it. My mind just goes to those places.
When he finally texted me I was so relieved. He was indeed fine. He'd decided to buy the go-cart and had come home for the trailer while I was still out on my walk and it had taken awhile to get it loaded and and so forth.
"Why didn't you just call me?" he asked when he got home.
"I did!" I said. "It went straight to voice mail."
"Huh. Well, I'm sorry."
My number one rule of all rules is DO NOT WORRY THE MAMA!
Of course, it takes so little to break that rule that it's understandable when it happens.
Sigh.
I dragged the canning kettle out of the pantry this afternoon and went through recipes for pickled green beans and retrieved six pint jars and the lids and bands for them. I put the jars in the canning kettle along with enough water to cover them nicely, toted it to the stove, sterilized my lids and bands, got the green beans out of the refrigerator and began to trim them to be jar-size. I also made up my pickling brine and set it on the stove.
While I was in the middle of this, Vergil came out with August and Levon as he was bringing us his leaf chipper. The boys were thrilled with the new go-cart, of course, although it's going to be a long time before that thing is in any sort of running order. Another project for the men!
August came in and helped me with the beans and we chatted. I asked him if he liked it when I told stories about my grandparents and he said he did so I told him the story of how my grandparents met because of a garden that my grandfather wanted to start on a piece of property that my granny's father owned. I told him as much about it as I knew and ended by saying, "So see? If my granddaddy hadn't wanted a garden, he would not have met my grandmother and I never would have been born!"
I'd actually never thought about it that way but it's the truth. Granny's father had been so impressed with the young man who made a garden on his city lot that he invited him for dinner where his daughter (the baby of a family of ten children) and that young man fell in love.
I showed him the diamond in the ring that my husband had made for me which had been the one in Granny's engagement ring.
I am quite certain that I get far more pleasure in the telling of these tales than the grandchildren get in hearing them. But- you never know. I remember that story from when my grandmother told it to me and that diamond in my ring is a brilliant reminder. It has a visible flaw in it- a speck of carbon that looks like a tiny seed and I can remember Granny telling me that because of that, Granddaddy had been able to afford it. That flaw is my favorite part of the stone. It's so small that you have to know it's there to see it which makes it like a secret message from the past. At least to me.
Well. I need to go make our supper. The clothes are off the line and put away, the kitchen is somewhat tidied, the beans are out of the canner. 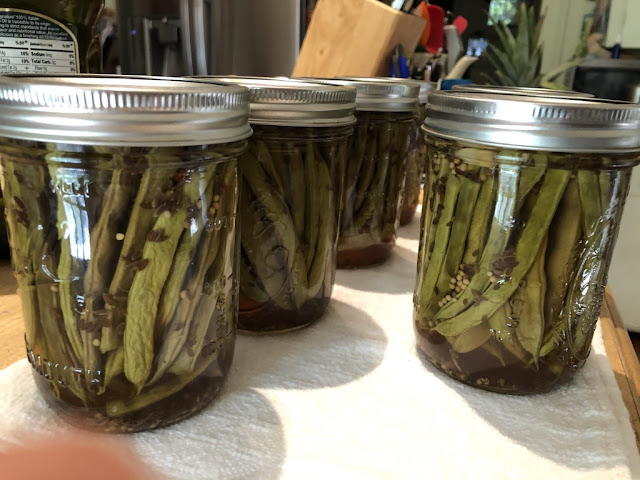 I fooled around with the basic recipe. They have vinegar, of course, water, garlic, dill, salt, sugar, mustard seed, and red pepper flakes. I hope they're good. I'll have to open a jar just to see, of course.
We should be getting cucumbers soon and I have a feeling that my new pantry is going to be filled up before the summer is over.
I love that pantry. I love the man who built it for me. I'm so glad he's okay.
He's more than okay. He is fine.
Love...Ms. Moon