A Whole Lot Of Love 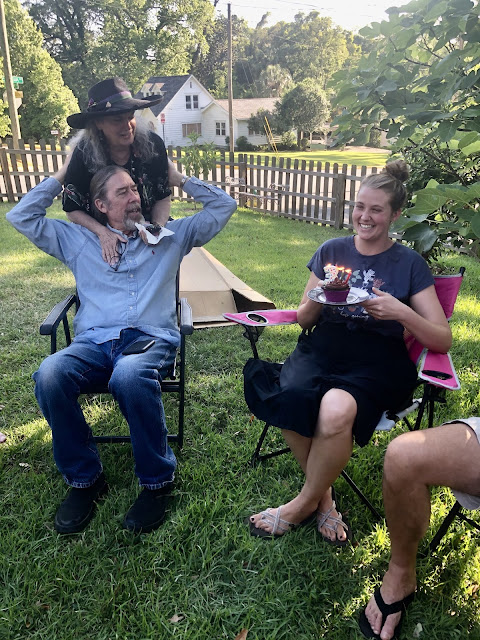 You know how it is when you haven't talked to a good friend for a decade and then you do talk and you pick up right where you left off and the time that's passed means nothing?

Well, that's how it was this weekend. First with Lon and Lis and then with my family. Of course, the family has all seen each other during the course of the year, but we all haven't been able to hug each other, kiss each other, see each other's faces. And with the Williamsons, we hadn't even laid eyes on them. And yet, fifteen minutes into being here, Lon said, "I feel like I was here yesterday with you guys, sitting right here in this kitchen."
Yep. It may have actually been fifteen months, but it felt like minutes. And with the kids and grandkids, kissing and hugging was as familiar as breathing and everyone hugged everyone over and over again, kisses were given freely, no one wore a mask, and tears flowed.
"I love you, I love you, I love you!" The words were traded and given and received, heart-words, true words, sweet words, words we've been able to say but this time with nothing between us but clothes and air and skin.

When Lon and Lis got here we all had martinis and we talked and talked and Lis made platters with Lori's (nicest person in the world) chicken salad, and smoked salmon, cheese, apples, crackers and the kind of mustard that cracks between your teeth because it's all seeds. And then, dinner!
One night when we'd all four been talking on the phone sometime in the last year, Lis and I discussed what we were cooking for our suppers that night and I was making scallops with cherry tomatoes and pasta and I promised them that when they next came to visit (which seemed like it would never happen) I would make it for them and I did. There was also salad and sourdough and we ate and talked until it was time, past time, for bed.

Saturday we woke up and had very late breakfast and leisurely got ready for the day's events. Lis had to pick up a new instrument that a Tallahassee woman had made for her and then we all had the party at Jessie's. I made up a meatloaf so that when we got home we could throw it in the oven. The party's food theme, we had all decided, would be "international dips." And thus it was so. I took some Baba Ghanoush that I made and some Tzatziki that I bought and crackers and a pavlova with chocolate and berries and whipped cream.

This was what the party food table looked like. 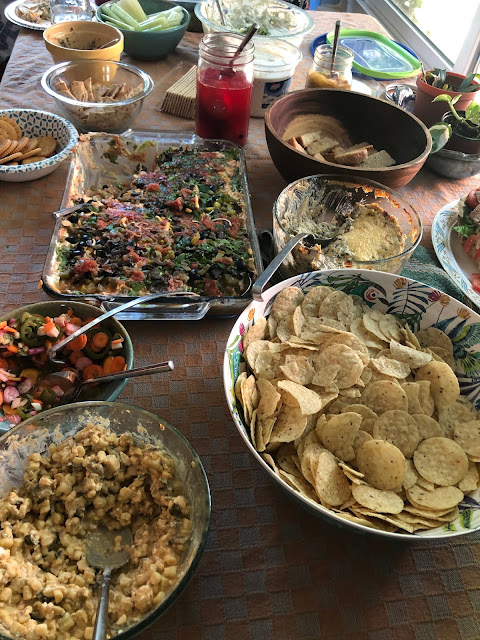 There were so many delicious dips! Corn, chard with artichoke and spinach, seven-layer...I can't even remember. Of course there were chips and crackers, celery, cucumbers, and broccoli. And May made a Caprese salad sandwich. I took some of the beet-pickled eggs (thumbs up, y'all!) and other pickles, Rachel made vegan double chocolate pudding cupcakes. Lily made a pickled relish of radishes, carrots, jalapenos, and onions that was to die for. She also brought toasted bread that she'd made. Vergil made lemonade and Rachel mixed up mulberry/lemon mojitos. 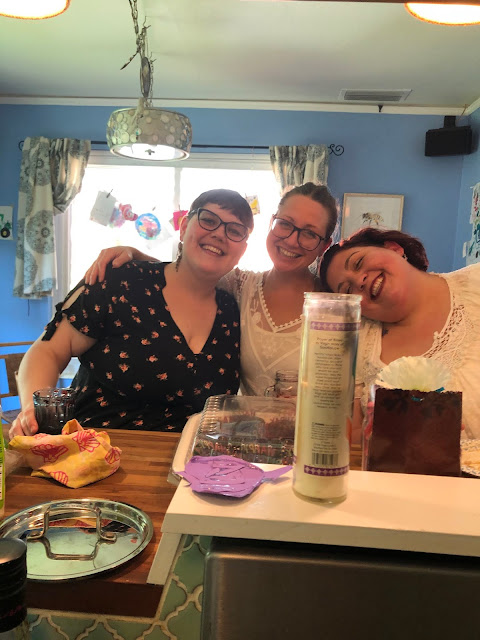 Three of my lovelies. Why I didn't notice the candle blocking Lily's face, I do not know.
Before long, everything was chaos, the cousins had all found each other and ran from one place to play to another. August and Levon followed Gibson and Owen around with serious cases of hero worship. Maggie was the boss of everyone.
Eventually, we all made our way outside to a shady part of the lawn and Vergil, the ultimate host, quietly moved chairs and liquor, ice, and more chairs and we ended up in a beautiful circle. 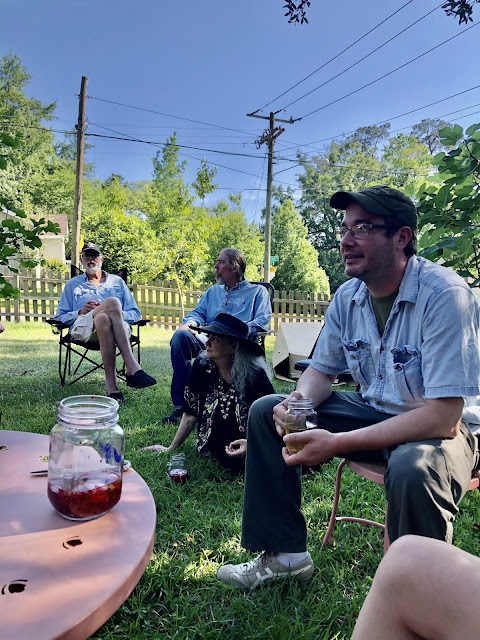 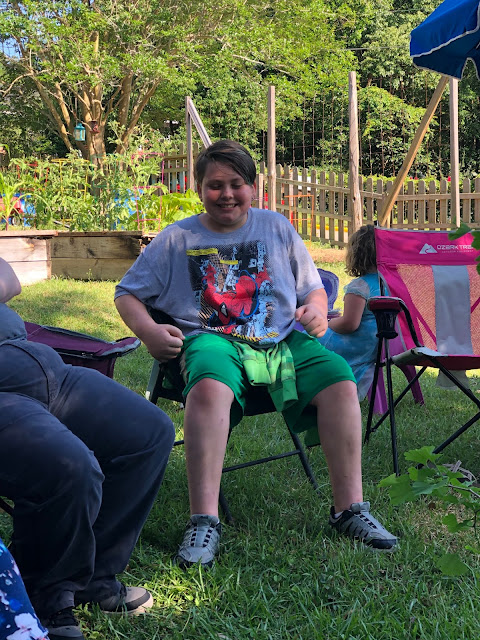 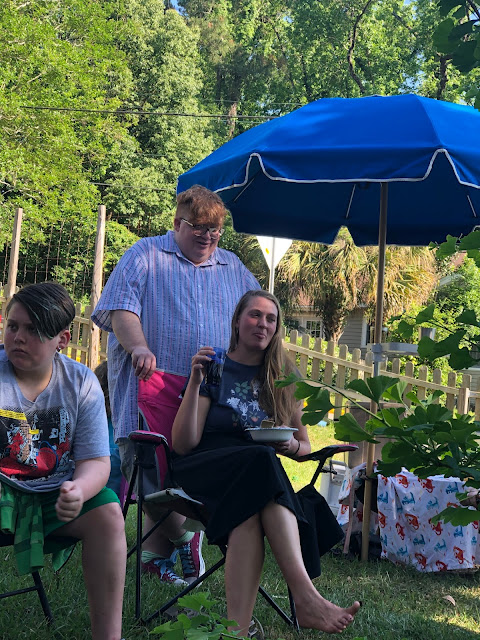 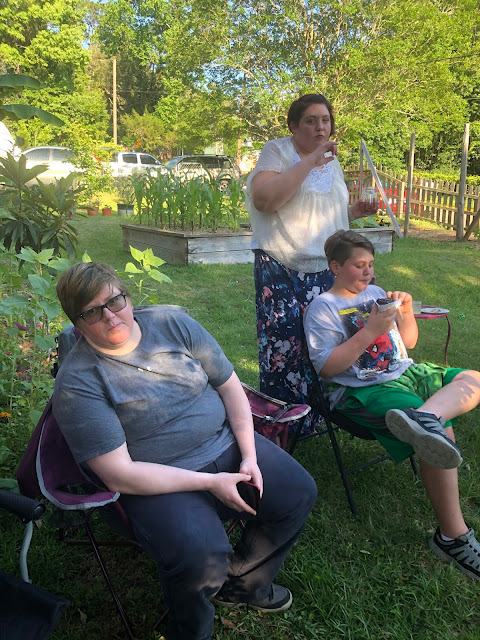 We caught up and talked about how the past year has affected all of us. We talked about how precious it was to all be back together. We discussed the fact that some of us have become so used to staying home that it's going to be very hard to get back out into society while for others, it's going to be wonderful. Hank is about to start live trivia again in a very controlled outdoor socially distanced space. He's very excited for that. The kids are enjoying being in real school. Lon and Lis, in their year of staying home and not working their usual frenzy of gigs and recording work have had the realization that they don't want to go completely back to the insanity. We've had a very clear lesson in what is important and what is not. What we like doing, and what we don't.
The children continued their raucous activity and occasionally one of us would go check on them. Or send Owen to do it. And eventually, we realized it was time for the birthday girl to blow out candles and be sung to and to open presents. 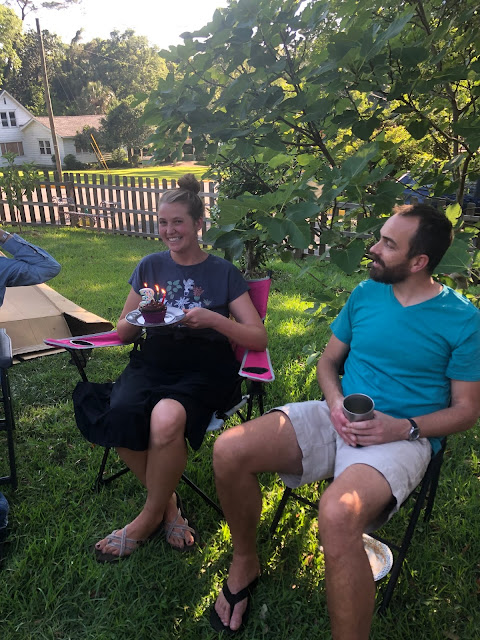 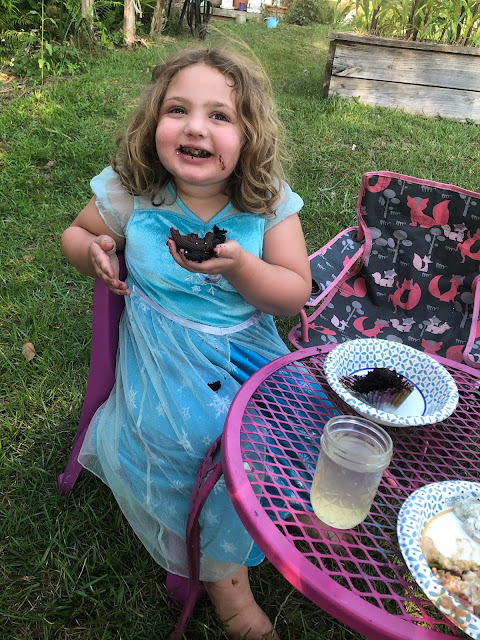 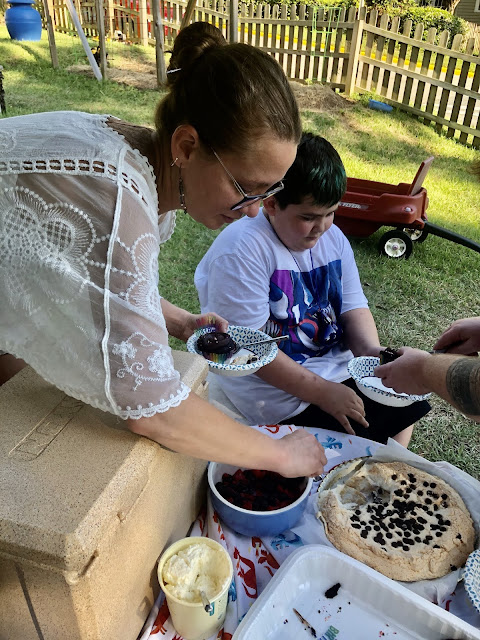 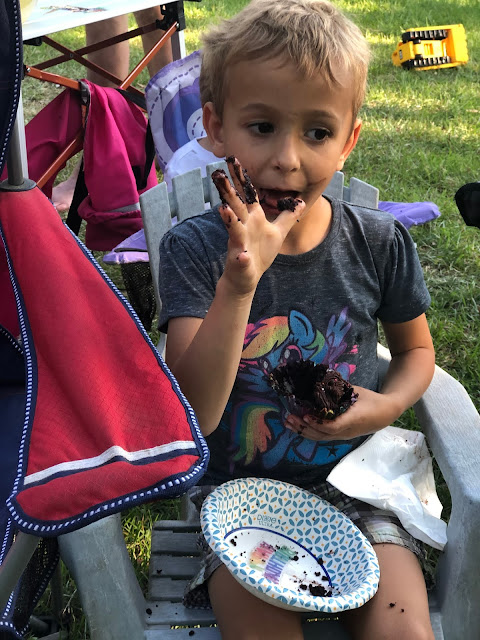 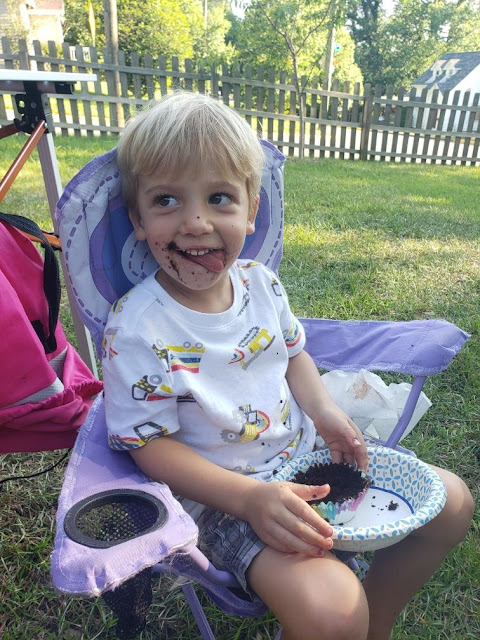 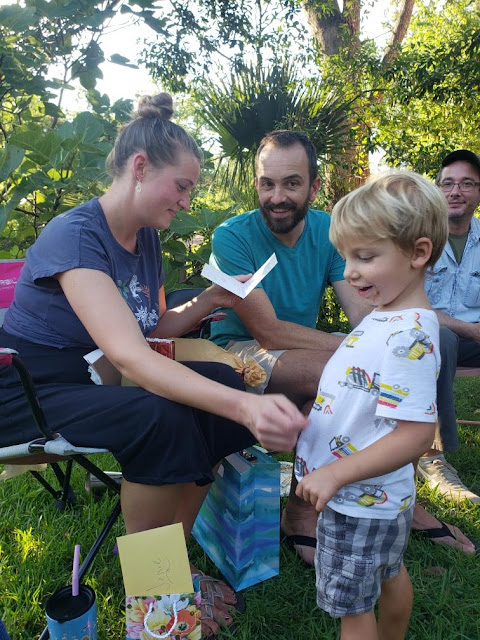 The birthday girl cried. The babies ate chocolate. We caught August scooping whipped cream out of the container with his fingers and we just laughed and let him get away with it. The kids, after playing with all the toys and jumping on the trampoline and pretending in the RV, found a large cardboard box and that was it. It got so noisy and rough that Jessie asked if someone should perhaps intervene. Vergil reassured her it was fine. And it was. 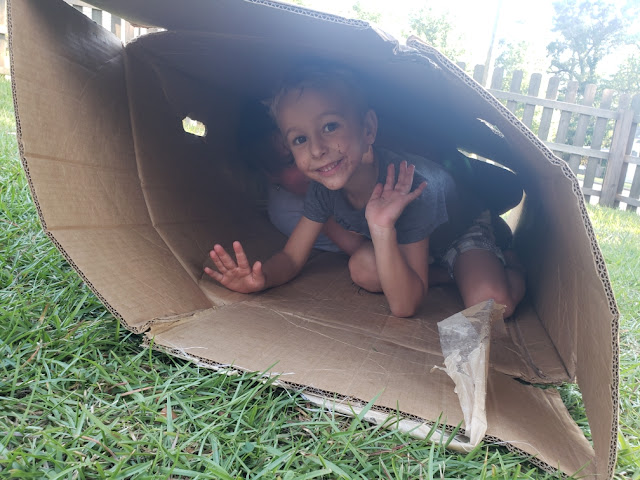 They took turns being inside it and being pushed down the little hill in the yard and being jumped on and flattened in it and they loved it. No blood, no foul. No tears.

And then it was time for us to come home. Despite the fact that we'd all eaten our share of dips and cupcakes and pavlova, I still baked the meat loaf, cooked some of our frozen field peas and greens beans and fresh-out-of-the-dirt potatoes. Talk about your farm-to-table...
Lis played her new octave mandolin some. It is a thing of beauty, handmade with her imput and help with the design. Here she is playing it at Jessie's house. 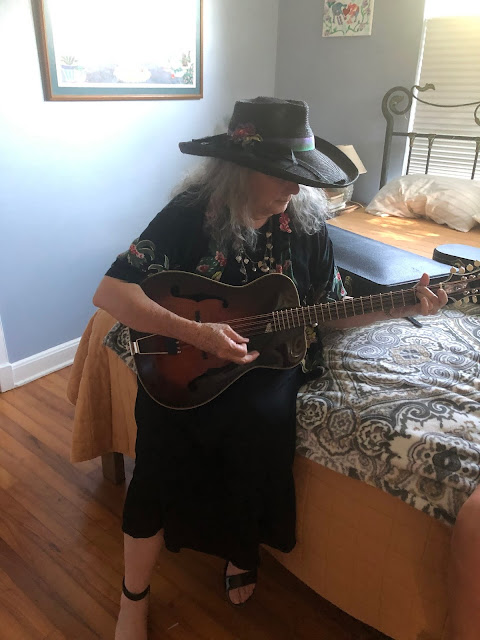 We all got up this morning and kept agreeing that it had been so perfect for Lon and Lis to be there yesterday for the great unmasking, the love fest, the Jessie birthday. Lon and Lis are indeed Jessie's fairy godparents and all of my children adore them.
We ate another breakfast. This time of pancakes and then the Williamsons had to pack and get ready to leave. They were going down to Sopchoppy to play a song at a memorial for a dear friend's mother's memorial service.
We sat at the table for quite awhile after breakfast, though, talking about the old TV shows we remember from our childhood. We all got the Mr. Ed theme song earwormed into our heads. We sang the song from My Three Sons together and laughed and laughed. We talked about how every damn TV show about the south that we grew up on insulted the people and made us all look like complete hicks who called swimming pools "SEE-ment ponds" and took baths in water towers. Except for Andy Griffith. Bless him. Bless Mayberry.
When it was time for them to go we sent them off with eggs, venison, and vegetables from our freezer and, because I love them so much, a jar of mulberry preserves.
It was such a beautiful visit. I am so grateful they came to stay.
This afternoon, Vergil and the boys came out to help Boppy with the  unloading of his new boards. The boys decided they were done with that pretty quickly and came in the house where we read books, they finished up the pancakes from this morning, asked for more, and got to watch some TV. So it's been another full day.
There will be leftovers tonight.
It sounds like all we did was eat. And drink. And here's what I have to say about that- we did a lot of eating and we did some drinking and we did a lot of sharing and laughing and celebrating. We are alive, we are healthy, we survived 2020, we know how very, very lucky we are.
And that's what happened here this weekend.
Our hearts have been well and truly blessed.
Love...Ms. Moon.
P.S. And as usual, some of these pictures were taken by Rachel. The best ones.