From Chickens To Bill Gates. And More! 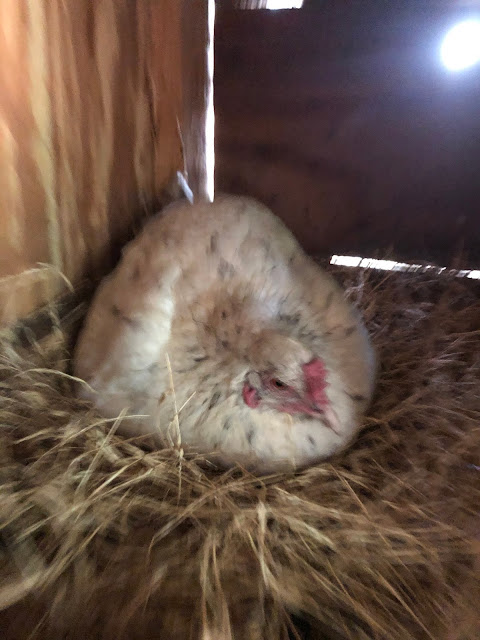 Well, I called it. Darla is sitting on eggs. So far Dottie is not but I wouldn't be surprised if she didn't claim a nest as her own soon. When I let the chickens out this morning, Darla leapt off the nest to go get some food and water and so I was able to see her little cache. I even slipped a green egg under her. When I went out later to clean the nests, I was going to mark the eggs so that as the number of them increases (and it will because she'll claim other hen's eggs) I can keep them down to a reasonable number and know which ones are freshest and thus, the ones to take, but she was so perturbed just at the sight of me that I couldn't bring myself to disturb her. Hens make a chittering-chattering sound when they're brooding if they feel threatened, and they spread those tail feathers wide. I have to admit that I am curious to see if any of these eggs will hatch and if so, to discover whether or not any of Fancy Pant's love-making efforts have resulted in offspring. My chickens are such a mixed bunch of breeds and when people ask me what sort of chickens I have I can only answer, "Mutts." I know a few of the breeds but that's not what I'm in it for. I cherish their differences and there ARE differences in the varieties and of course in the egg colors. But I love watching all of the different types as they go about their days, some of them so very social, some a little more stand-offish, all of them loyal to the flock, even little Violet who is the most skittish of all. I have absolutely loved watching the barred rocks that I got last spring as they seem to be a very feisty, curious breed whose clucking is so melodious. Enough so to draw my attention to those facts.

This morning two of the roosters next door crowed at the exact same time and they almost harmonized. Each rooster has his own very distinctive call and they call and respond on and off all day but rarely do they crow at the same time. I imagined and visualized the two boy birds after they'd sung out that little duet, raising their feet and high-fiving each other. Or perhaps they'd do it with wings. Wing bumps.

I know I talk about my chickens a lot but they really are a big part of my life. I do not feel about them the same way some people feel about their dogs. They are not my boon companions nor are they substitutes for children but as Lis said last weekend, they do add an air of comfort to the yard and that if the chickens are roaming about and happy and going about their chicken business, all is well. There are no stray dogs or coyotes in the yard, no threats to human or beast. I had never thought about it in quite that way, but it's true. And if there ever is a threat in the yard, they tell me about it with their shrieks and flappings.
I've often said that their presence is soothing to me and it is. There is a rightness to chickens and perhaps even a righteousness. Where there are hens, there are eggs which is protein and as I've also said before, it is my own personal belief that chickens have done far more for the human race than religion. Okay, I usually say, "Jesus," but why pick on him? All religion. And yes, I said it, I mean it, and I believe it. Doesn't mean I worship chickens which in and of itself is example enough of one of the main tenants of most religions which is the worship of something or someThing to the exclusion of the message of the prophet, savior, teacher, what have you.
A god. Chickens are not gods anymore than I am but they are worthy of respect and admiration for sure.

So I picked a lot more mulberries this morning. I'm determined to make more preserves. I'll probably pick again in two days and that should be enough to make it worthwhile to get out the jam pot and the canning kettle. I am somewhat astounded at how delicious those preserves are.

I also finally, FINALLY got my dress cut out. I'd put the sewing machine up before Lon and Lis got here because we actually use the dining table for eating when they're visiting but I took it out of its case again today and set it up, ready to go. Same with the ironing board.

I also made two small lemon sponge cakes with the egg yolks I had leftover from the pavlovas. I glazed one cake and froze the other. I have no idea if they're any good and it's sort of ridiculous to make something we really do not need with the rationalization of not wasting food. Lord knows I have plenty of eggs and if I'd given them back to the chickens they would not have gone to waste anyway. I would have seen the return in more eggs.
Whatever.

Tonight I am going to use the "roast" function on my stove for the first time. I have thawed out a chicken (hypocrite! hypocrite!) and it does seem that if anything would benefit from the roast function, it will be a roast chicken. I have even made stuffing because why in hell should something I love so much only be served at Thanksgiving?
It shouldn't.
I'll tell you how it works out.

I see that Bill and Melinda Gates are separating. For some reason, this surprises me. They seemed so well suited in their passions but I guess there are passions and then there are passions.
Know what I mean?
I'm not trying to be funny here. I think that long-lived love is something of a miracle, albeit one that requires a great deal of, if not work exactly, sweetness, the paying of attention, compromise, and, yes, the right sort of passion. It's definitely one of the most complex and rewarding things I've ever been involved in and I know without a doubt that if I had not fallen in love with the right person who fell in love with me too (there's your miracle), all of the sweetness and paying attention and compromise in the world would not have worked. And there would not have been the passion.