Let Us Go Down To The River 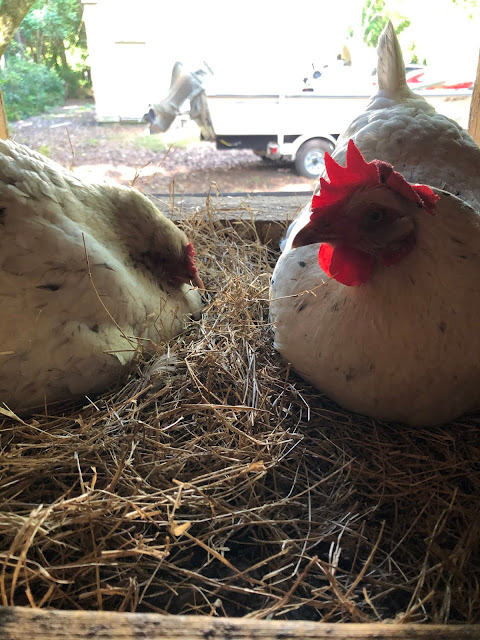 This morning I found Dottie keeping Darla company as she sits on her eggs. I opened up the hatch behind the nest to bring in more light to take the picture and there you are- the sun shining through Dottie's comb and wattle. Poor Darla. I know she is exhausted. Her babies should be appearing any day now.

I got all my chores done early today, or at least early for me. Breakfast burritos made for my husband, sheets and clothes and towels washed and hung on the line. Then I cut up a cantaloupe and made a sandwich to take the Wacissa because Jessie and the boys and Lily and Maggie had planned an outing there today. Exciting!

Jason is taking Owen and Gibson to Disney this weekend or to the Star Wars resort or something. That's where the water stuff is that Gibson needed a cast cover for. Here's a picture I stole off Jason's FB page. 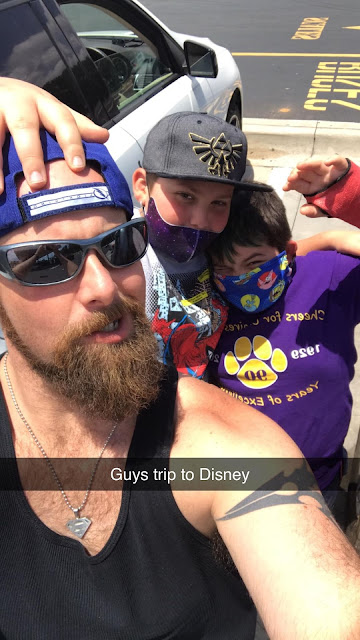 He got the boys out of school early to leave and so Lily got Maggie out early too and the Wacissa was her treat. I'm not sure she knows where the boys are going so don't tell her. Gibson told us that she didn't know but I'm not sure about the status of that plan.
I got a ride with Jessie and there were very few people at the little  park when we got there. Some teenaged kids, but very well-behaved teenaged kids and some older folks. We set up our chairs and coolers with lunch and snacks and were soon joined by Lily and Maggie and also the woman who will be house-sitting for Jessie this summer whom I had not met. She turned out to be a really sweet and funny lady and I truly enjoyed meeting her.
The kids played in the water and the sand and more children and their parents showed up and soon toys and floats and buckets and trucks and nets and shovels were being enjoyed by all. I love watching children's encounters with other children- the way they sort of just meet and become instant friends although frequently, they do not seem to know their new friends' names. It doesn't seem to matter in the least. All of these children got along sweetly and as they played in the water and in the sand, we mamas and friends all sat in the shade of a cypress tree and watched them. Jessie and Lily and Jessie's friend and I immediately got into topics that were, well, salty as the kids say these days. We talked about things that as Shelby said in "Steel Magnolias" made the fish blush.
It was great and I love being able to have this sort of relationship with my kids. So easy and so real. We did a lot of laughing.
Pictures: 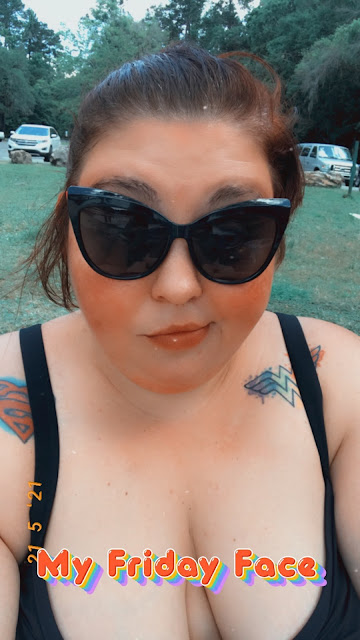 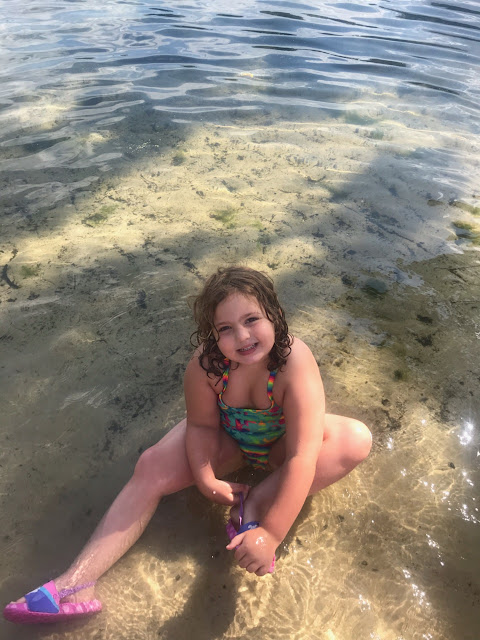 Magnolia in the clear river water. 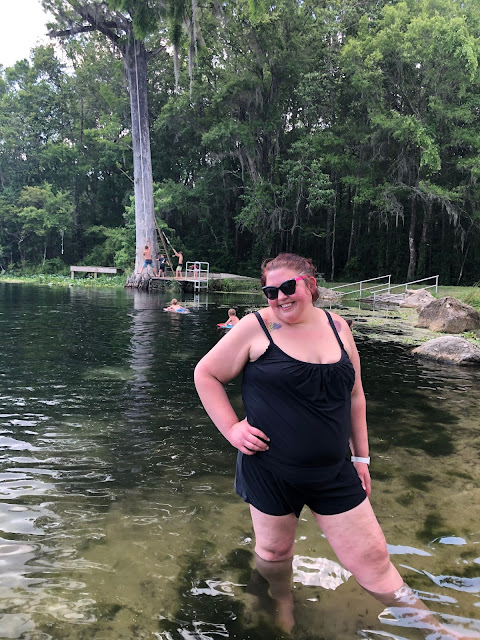 Jessie took this one of her glamorous sister. 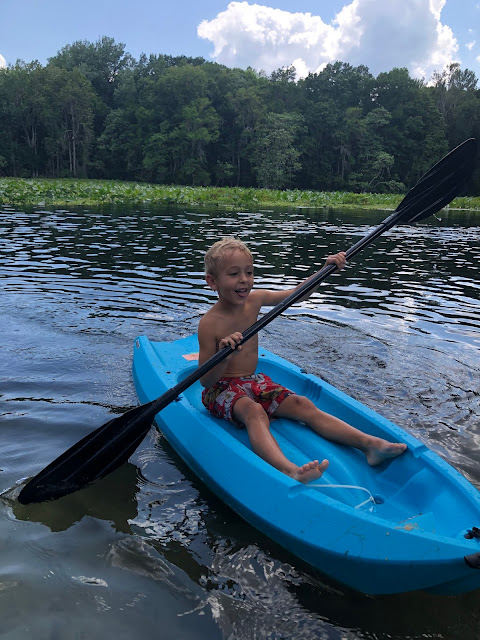 August in Jacob's kayak. We did not know Jacob until today but he is a very fine young man and his mother is sweet.
Jessie took this one. 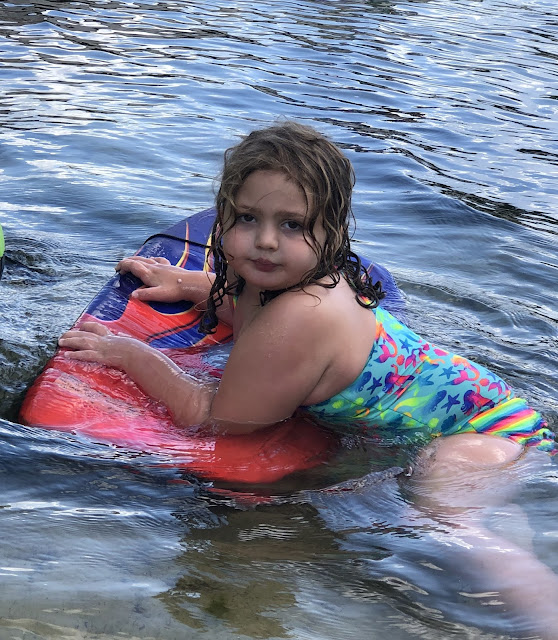 Maggie on someone's float. By the time we left, there was an entire girl float gang. They seemed to be having a terrific time. Salty-ladies-to-be, most likely. 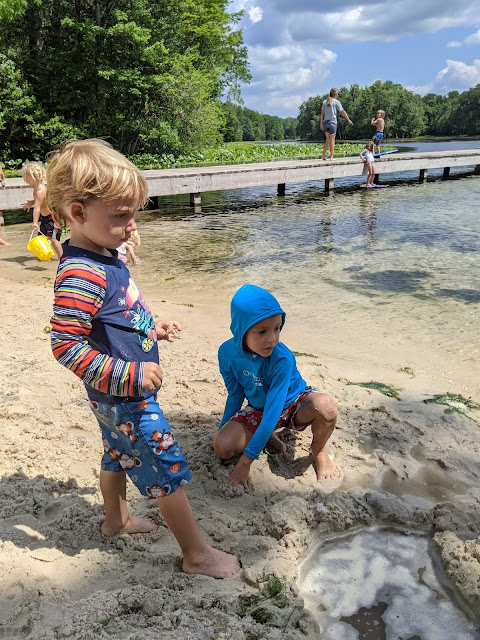 Levon and August. Jessie took this one. I had to laugh. You know how much Levon loves to dig? Well today, for the first time, I saw him dig in the sand with just his hands and he reminded me of a dog. That sand was flying! His arms were a blur!
I got in the water and even dove in to get my whole being wet. The water, as always, was cold and good and holy. The only problem with the entire outing was that I got bitten repeatedly by...FUCKING YELLOW FLIES and my right foot is now swollen up like a sausage on the grill and my left foot is red and itchy and to add injury to insult, while I was getting the clothes off the line when I got home, another one bit me on the calf.
Gee Dee. I mean...really? Those evil insects love my evil blood.
I had a Benadryl in my purse and I took it as soon as I first got bit and because of that or whatever reason, I did not have the absolutely maddening itching that I got the last time I got bit. I mean, itchy, yes. But I didn't feel like I was going to lose my mind over it. Lily gave me an ice bag to put on the afflicted areas and the cold Wacissa was right there to wade in so I was okay. And the swelling should be gone by tomorrow or maybe Sunday.
Whatever.
It was a lovely day. The river as beautiful as always, the people all peaceful and thoughtful. Laughing with my daughters, watching my grandchildren play and splash and dig. I put sunscreen on Levon, carefully painting it on to avoid his eyes, spreading it around his beautiful little face. He was so trusting and patient.
Overall, another good baptism in the purified, rarified, glorified, sanctified holy waters of a Florida river. As I was leaving, an older man (by which I mean probably older than me) who was there with his wife shot me a peace sign.
I loved it.
Happy Friday, y'all.
Love...Ms. Moon
Posted by Ms. Moon at 6:38 PM