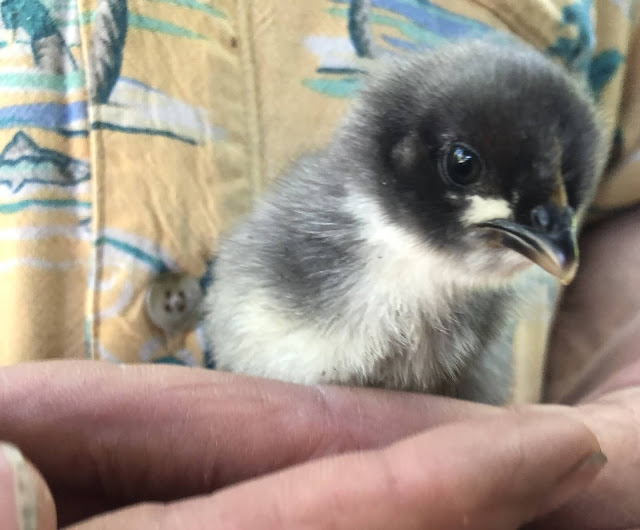 It's been a big old day here for the Moons. First off- that's the little dark gray (and yellow) chick whose picture I couldn't post yesterday. For whatever reason I keep wanting to call all of the chicks "he" and I hope that's not the way it really is. But it will be what it will be.
And so will they.

So anyway, Jess and the boys came out today for a visit and the boys helped Boppy in doing some chores and then August wandered in and wanted a book and then Levon joined us and we had lunch and there were a few more books and just the general stuff. Jessie and I talked as we do, and the fellows worked on painting a model car that they want to put together as their mother helped me put the clean sheets on the bed. The afternoon drew on and Levon started showing signs of getting sleepy. They got ready to leave and we were standing outside the back porch, August already in the part of the yard past the little fence where we park the cars and Levon and Jessie still standing on the porch steps and I was on the ground below them when I saw a snake.
"Be careful, Levon. Look Jessie- a snake." I was trying to identify it in my head but she was faster with it.
"Daddy!" she called. "A rattlesnake!"

And indeed, it was. I'd say a juvenile Eastern diamondback, no real rattles yet but you can see where they will be.

Mr. Moon was there in a split second.
"Get back, Mary," he said. For some reason I felt absolutely no threat from the thing. I mean- I had no desire to grab it but I wasn't worried about being a few feet away from it.
I took its picture. 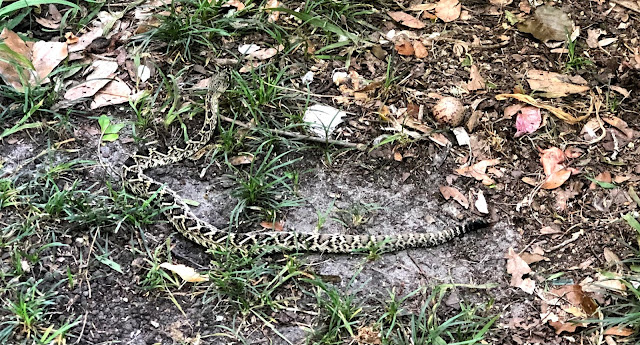 It was quite close to the house, close enough that we were worried that it would crawl under it and Mr. Moon went to get something to kill it with because, well, a rattlesnake under the house is just not a good idea. It's not like it would jump on us but we are in and out the doors a hundred times a day and no, we do not always look where we're walking. I mean- that's just the way it is.
And of course- the children.
So I stood and watched to see where it was going and Jessie and Levon watched from the steps and August came a little closer to see it. The funny thing was, the chickens were fascinated by it. They were in the backyard too, and they circled around it, just watching.
"What are those chickens doing?" Jessie asked.
"Same thing we are," I said. 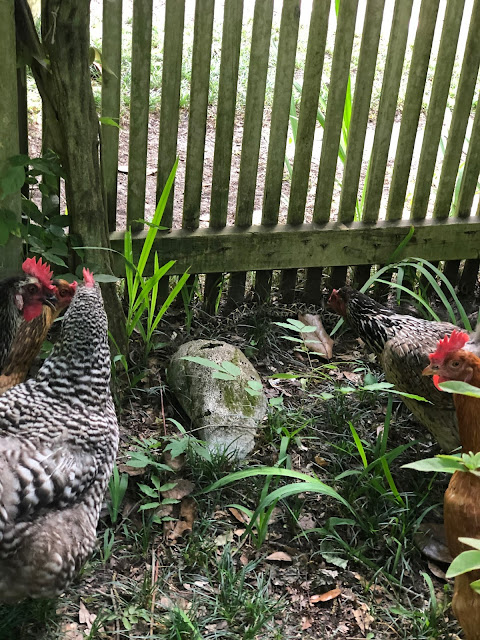 It had crawled over to the fence. Can you see it? My hens seemed to have the same reaction I did- cautious fascination. Chickens are very leery of snakes but they'll eat a small one. I guess they were checking this one out to see if they thought it something that might be tasty or, on the other hand, dangerous. They settled on "dangerous" I guess, and moved away.
Mr. Moon showed up with a shovel and an axe. And the man was wearing a pair of shorts. No shoes. No shirt.
No way.
"Let me at least get your shoes," I said. I did not like this scenario. The rattler was right up against the fence and there was really no way Glen could get a good angle to get it with the shovel. And snakes, like all of us, do not wish to be killed and do not gracefully accede to death but will tangle and twist and strike as well they should.
"I'm going to get my gun," said my husband.
I was so torn at this point. The snake was posing no immediate threat to any of us and yet, there was no way any of us were going to capture it and bag it and transfer it somewhere else far from people. There are those who are fearless about such things and have the knowledge and skills and equipment to do it. We are not those people.
And besides that, the snake was rather beautiful.
But. It is the most dangerous venomous snake in North America.
In the end, the snake was shot. We all went inside but August went straight to a window that allowed him the perfect view of the killing.
"That's the first time I've ever seen Boppy kill anything," he said.
"That's the first time I've ever seen Boppy kill anything," I said.
After the head was virtually removed from the body we went back out to see how it still twisted its body, writhed and moved, even after death.
None of this was taken lightly or casually. Jessie said a little prayer for the beautiful snake. I told the boys that this was a good lesson to always watch where you are walking, even in town. You never know.
It was sort of amazing that I saw the snake at all. Their camouflage is perfect.
I suppose this was a a visit to Mer and Bop's that the boys won't soon forget. The whole time this was happening I was thinking of one of the strongest memories of my childhood. It was in Roseland which was rife with snakes and my Granny and I were walking between her and Granddaddy's house and our house and I saw a snake which Granny didn't see. She was profoundly deaf and so it was hard to get her to understand what I was trying to tell her but she did and we both froze. My grandfather came running and said, "Don't move." We were quite close to the snake which was, again, a rattler. He ran and got a hoe and he killed it and I'll never forget that. I've always felt that maybe I saved my grandmother's life because she was just about to step on it.
I am the least visual person you know so it is miraculous that I have now spotted two rattlers in my life, one right by my grandmother, one right by my grandson.
As Jessie was leaving after everything had calmed down, she said, "That was such a Florida thing. Man in shorts shoots rattlesnake."
I thought about that and said that yes, yes it certainly was.
"You're such a country woman," Jessie said to me and I had to agree. There I stood in my holey overalls, having just witnessed all of that and I was not overly upset in the least.
"I never aimed to end up like this," I said. "I guess it was growing up in Roseland."
And I guess it was.
I looked around me at the chickens going about their business, the beautiful garden busting wide open with summer vegetables, the magnificent magnolia tree above me, mosquitoes tormenting my arms, and I said, "And I'm glad I did."
There is more to this day. We actually went to town and attended a very, very fancy dance recital that Magnolia June was in. We sat in an auditorium surrounded by maskless people (we wore ours) with Lily and Lauren, Gibson and Owen, Jason and his mother and uncle and aunt and were in a completely different world. Of course Maggie was onstage for about 1.5 minutes but she was lovely and did so well and the rest of the dances were danced with full hearts and a lot of grace and we enjoyed it. 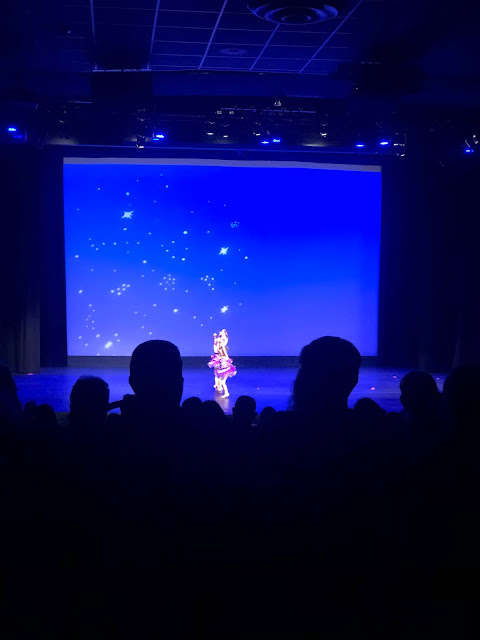 (Not Maggie but three other beautiful girls.)
I took my grandwomanbaby a bouquet of magnolias and hydrangeas, tied up in blue ribbon I got at the Bad Girls Get Saved By Jesus Thrift Store. 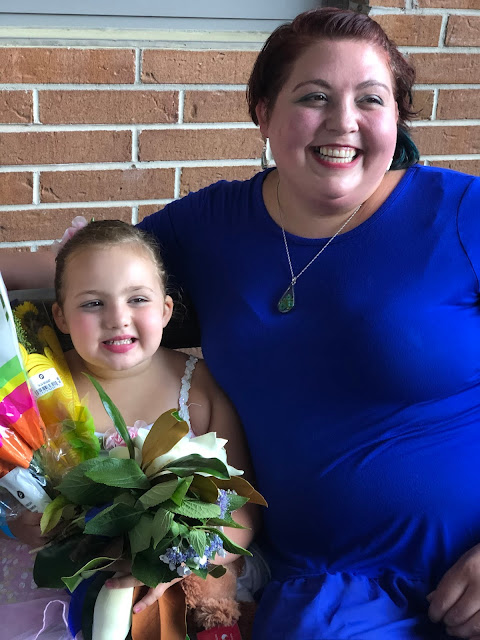 She had two other bouquets and allowed herself to be posed with her mama after it was all over.
Mr. Moon and I drove home and the auditorium where the recital had been was all the way west of Tallahassee and we are east of Tallahassee and we drove through parts of town where I haven't been in years and I was dumbstruck by the new construction, restaurants and tattoo parlors and nail salons, the way FSU has grown to the point that I do not even recognize it and I did not even begin to relax until we reached the stretch of road where pine trees and oak trees lined the highway and when we pulled into our driveway I felt overwhelmingly relieved and happy to back in my little world, even if there are mosquitoes and yellow flies and extremely poisonous snakes. These things make sense to me where things in town just absolutely do not.
Happy Friday, y'all.