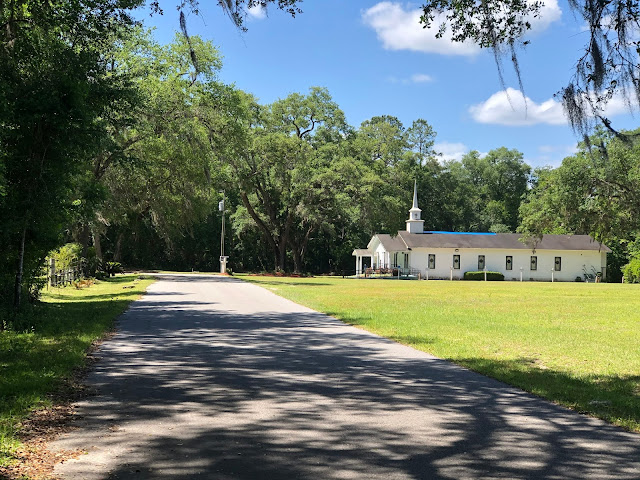 This morning I decided that my foot felt good enough to take it on a test run. Or, actually, test walk. I took it slow and easy, probably only covered about two miles, but it felt so good to get out and move. I walked down the little side road you see above which is named the Greater Elizabeth Road because that's the Greater Elizabeth Missionary Baptist Church at the end of it. It's a pretty little lane and actually, No Man Lord's family compound (at least I think it's sort of like a family compound) backs up on it.
Speaking of No Man Lord, I see that his trailer/camper has been moved from the center of his lot to the west edge of it where there are a few trees. I am sure that the temperature in that thing must get into the cement-melting levels when the sun is beating down on it. It's nothing but an oversized tin can and I don't think he even has electricity so he doesn't even have a fan.
Yes. Right here in America, richest country in the world.
Do we even claim that now? If we do, we're lying.

So I made it home and took the trash and went to the post office and ate some lunch and hung the clothes and then I decided to go clean up the little peep coop in case I decide to put Darla and her babies in it. Of course I am counting my chickens before they hatch here but I felt compelled to do that. It almost felt like getting things ready for a home birth- sterilizing sheets and blankets, buying Chux pads and just generally nesting. Except that what I did today was mostly to scrape up chicken shit. The little coop is in the big coop and the chickens like to perch on it in the mornings and so the wire top of it was covered in poop and a lot of it has sifted down into the dirt floor below. I scraped the wire and dug up the dried poop dirt. That stuff is probably one of the best fertilizers in the world. Pure guano.
Then I decided that what I should do with this black gold was to distribute it around the base of the fig tree which we have not fertilized in seventeen years. Every year the tree gets so much baby fruit on it but it doesn't get very big and also, the squirrels and birds eat all the figs before they ripen entirely.
The poor tree needs some help.
So I hauled the amazingly heavy poop dirt over to the tree and then realized that the entire underneath area of the tree needed clearing out. Weeds of all sorts were growing there as well as cherry laurel saplings, some of them at least three feet tall. The reason we've let this all get out of hand is that the limbs of the fig have drooped to the ground around the edges, thus obscuring the sight of the saplings and weeds and giving us the ludicrous rationale of if-I-can't-see-it-I-don't-need-to-do-anything-about it.
In all honesty I knew it was an overgrown mess under there so I crawled into the green cave of jungle with my pruners and pulled what I could and cut what I couldn't. 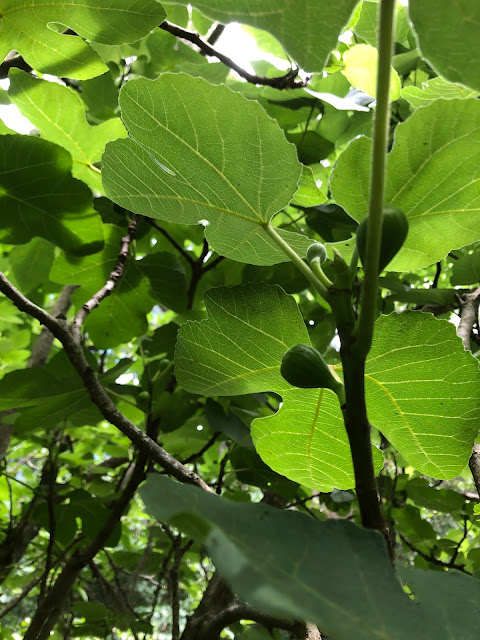 The chickens found me, of course, and had to observe exactly what I was doing. They jumped up into the cart to see what I had in there and then they joined me under the tree to scratch and chatter among themselves. They are such social creatures.
After I'd cleared as much as I felt I could do, I spread the guano around and then I hauled the weeds and saplings to the burn pile and by that point I was DONE! It's still not really that hot here but I just can't deal with it.
Plus- bugs. Although blessedly, the yellow flies left me alone.

When I was over at the burn pile, I decided to walk the twenty steps to the garden to check the green bean growth and ended up picking a good pocketful of the heirloom purple pole beans which are ripening before the rattlesnake beans which we also planted and I did pick one of those but it's not really mature. 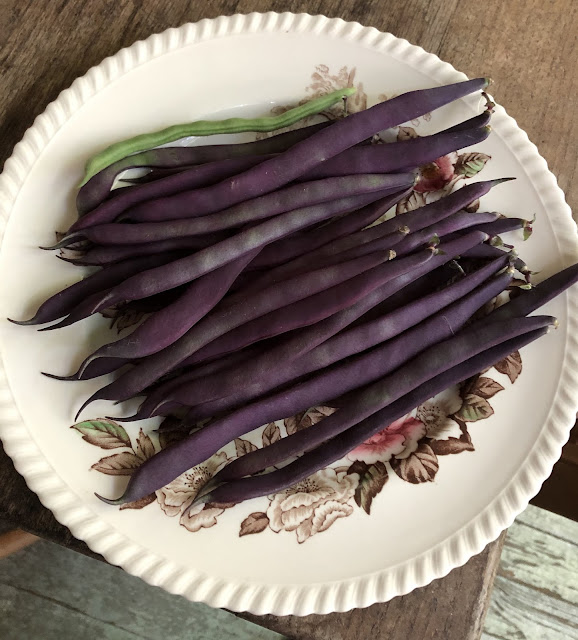 Aren't they pretty? I can't wait to see how they taste. I'll cook some in the next day or two but tonight I'm making pizza.
Gibson update: He is doing well. Not a whole lot of pain. He's had three Advil in the last twenty-four hours, Lily reports, and that's all he's needed.
Oh, to be young. Everything in and on my body aches at the moment just from the little bit of walking and yard work I did today. When, WHEN did I become this lame, limping old lady?
Ah-lah. Who knows? Not me. And yet here we are.
Love...Ms. Moon
Posted by Ms. Moon at 6:15 PM