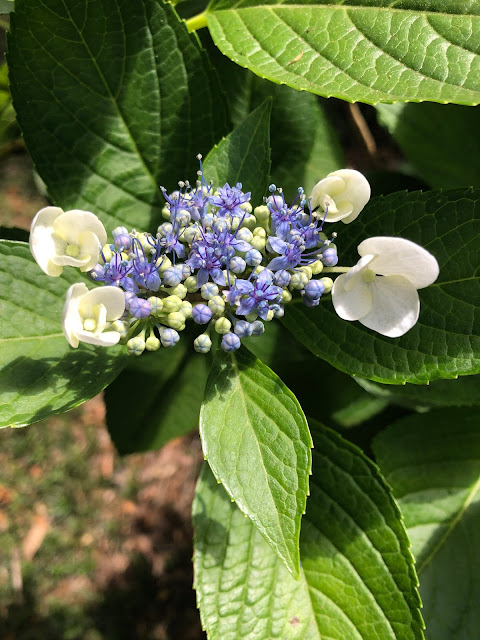 The lacecap hydrangea is starting to blossom and I think the flowers are going to be bigger and fuller this year as they are getting more light since we cut down that cherry laurel. They are so pretty but honestly, I think the regular hydrangeas are just as beautiful. The former owners of the house planted these and I suppose if I was motivated enough, I could plant some of the more common ones.

I spent most of the day outside as it is once again relatively cool and dry and these days are about to disappear and we shall not enjoy such temperate weather again until next fall. When I checked my weather widget today I almost fell out of my chair when I saw that it is predicting highs of 99 in a week.
I may die.
Anyway, yes, I worked outside. I did the dreaded chore of trimming the deadly and toxic Canary Island date palms but only pierced myself once as I had the proper tool- a pair of loppers rather than my usual pruners. I probably pruned them and the cabbage palms back too much but whatever. I also trimmed some magnolia limbs which have been dipping lower and lower to the ground. The tree in my backyard must be ancient. It is so tall and I suppose that gravity is having its way with the limbs, just as it is doing with various parts of my body.

I got on my knees and began the never-ending yearly assault on the crocosmia which I know some of you grow ON PURPOSE but which here is a nightmare invasive. 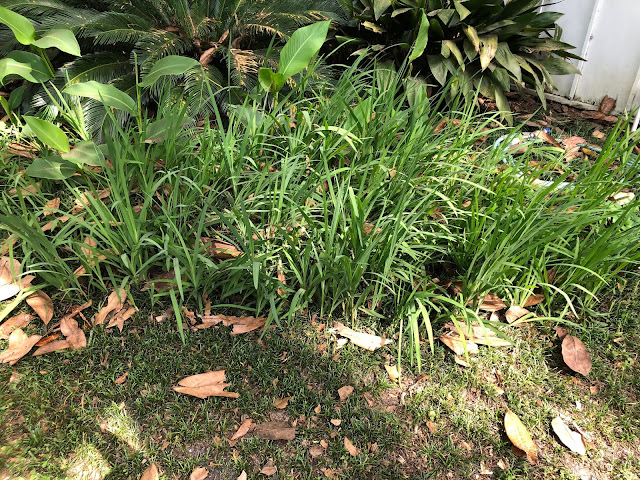 I had that whole area cleared out last summer although obviously, I did not get nearly all of the corms. It wouldn't be so bad if they ever bloomed but they don't. Well, maybe one out of a hundred. Not enough sun. And that is not even close to being the only place in the yard overtaken with them. Every year new clumps appear and spread.
Oh well. What would I do with my vast spare time if I did not have invasive plants to obsess over and pull out?

While I was down on my knees under the magnolia tree, the chickens came over to help, as they like to do. They are curious and interested whenever I am working out in the yard, hoping no doubt that I will turn up something interesting for them to eat. They do the same when Mr. Moon is working outside. 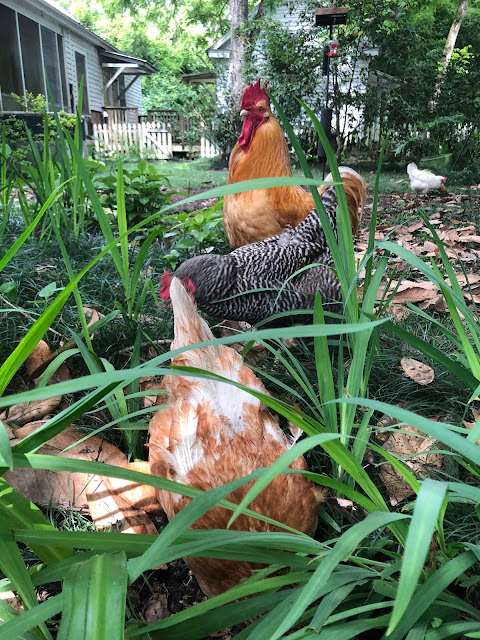 Do you see Liberace keeping watch? 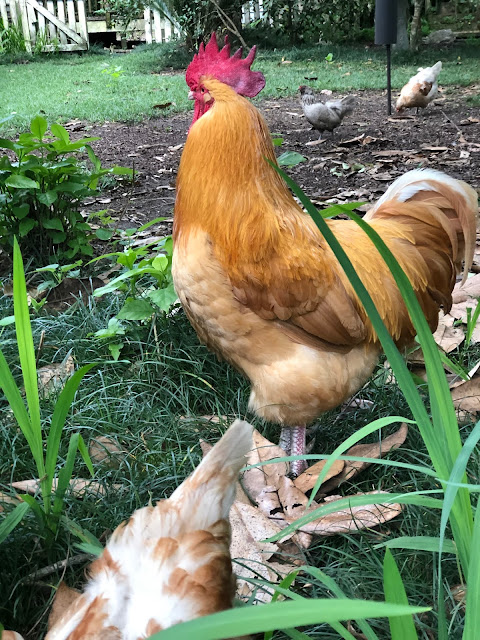 This is what a good rooster does. I swear, I often wonder how he gets enough to eat because he spends so much time doing just what he's doing there while the hens scratch and root for bugs. And when he does find something delicious to eat, he makes his tidbit call for the ladies who come running to enjoy whatever it is he's found. Fancy Pants tidbits too but it seems to me that the hens scorn his attempts at impressing them. Poor little guy. He also keeps watch but somehow he seems so less effective at the job simply due to his size and also, for the fact that Liberace will not tolerate his presence in the center of the action. One could write a funny children's book about the Brave Little Rooster Who Saved the Flock, I suppose, although I've not seen Fancy Pants do anything that indicates any special bravery. He certainly doesn't attempt to take his pleasure with a hen unless Liberace's back is turned.
I've been very emotional today in a very quiet sense. I've teared up twice, once while on the phone with a friend, once while texting with another friend. I've just felt a great need to be quiet and go about the pruning and hauling of limbs and fronds, the pulling of Virginia Creeper and crocosmia, the hanging of rugs and clothes on the line, the bringing of it all in, and putting it all where it belongs, with slow determination and awareness.
Here are two garden pictures. 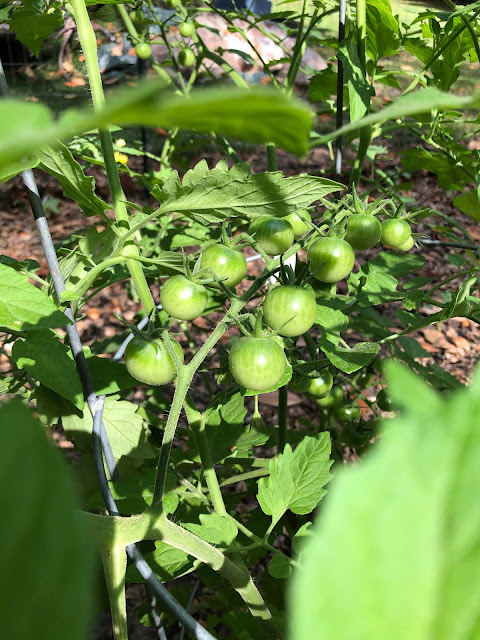 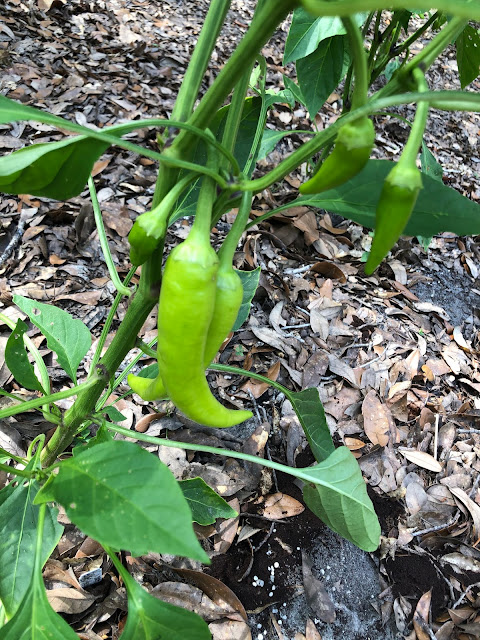 Cherry tomatoes and banana peppers. There is one almost-ripe Cherokee Purple tomato, big as a baby's head. We check on it every day, watching for signs of insects or disease, as carefully vigilant as Liberace is, watching for threats to his ladies.
I just watched a Daddy cardinal feeding one of his fledglings at the feeder. My heart almost broke with the sweetness.

I swear to you, I do not know what I would do if I didn't have this yard, this little piece of peace where things grow, even the things I wish would not, where we can watch the seasons change, every year a miracle, where birds both domestic and wild allow me to be part of their stories, to observe their lives, where we can grow food to eat, where we can get our hands in the dirt.
I am so fortunate.
Love...Ms. Moon
Posted by Ms. Moon at 6:31 PM