Troubles, Tacos And Treasures And So Forth 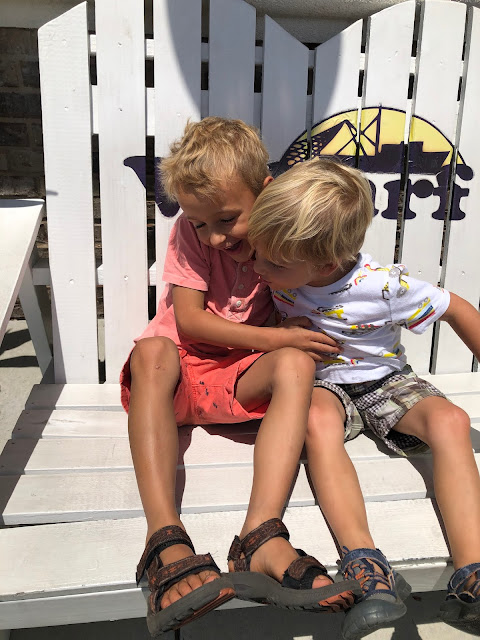 I woke up this morning totally unfit for human company. I kissed my husband who almost always gets up before me, and he asked how I was doing.
"Suck," I said. It was all I could get out without bursting into tears.
And I have no idea why. Just terrible anxiety trying to swallow me like a snake in the hen house trying to swallow an egg, slowly, cruelly, and with slick determination. It was one of those mornings where I laid in bed for a long time wondering why on earth I should get up. What was the point? Then again, what was the point of laying in bed?

Jessie texted to see if I wanted to go to Lake Hall or to the Wacissa.
"I don't know," I texted back. "You decide what you want to do and just let me know."
She finally decided just to take the boys to the library and for a bike ride around the little pond/lake nearby but asked if I would like to meet them for lunch.
Oh god. Sure, sure. Why not?
I decided to get my shopping done while I was in town and I went to Costco first. I was quite happily surprised to see so many people still wearing masks although they are not required now if you have been vaccinated. Of course- the problem with that seems to me to be that the very people who never wanted to wear masks in the first place are the same people who are refusing to get immunized because they don't want Bill Gates living up their ass or in their bloodstream or something and I would not put it past many of these people to just go maskless with the hope that no one challenges them on proof of vaccination.
Call me cynical.
But, I'd say that over ninety percent of the shoppers in Costco were wearing masks and somehow, that was heartening. Leon County, where the Costco is, has quite a high rate of vaccinated people so I feel certain that many of those wearing masks were immunized but were choosing to still protect themselves and others with that extra added bit of safety. As was I. Although in a way, I wonder if there's really a need. If I trusted the CDC when they told me that I needed a mask, shouldn't I trust them now when they say I don't?
It's...complicated, isn't it?
The restaurant where I was to meet Jessie and the boys was right next to Costco and she had a few things to return there so after I finished my shopping she met me and I stayed with the boys in their car while she ran in. We read a book while we waited. 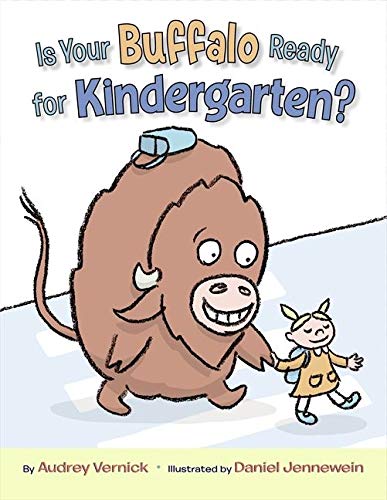 Quite appropriate as August is now truly and fully signed up for kindergarten in the fall at the same school his mama and aunts and uncle all went to. It's just a few blocks from their house.
He is so ready.
I think Jessie is too.
We went to the Wharf for our lunch which is a good seafood joint. It's where I've gotten a few take-out lunches on my shopping days but today we WENT INSIDE. We wore masks until we were at our table after ordering at the counter. It didn't even feel weird. It felt familiar and fine. The boys like me right now for whatever reason and they wanted me to sit between them which I gladly did. They got fried fish and also tiny corn dogs. With french fries. They were in heaven. Jess and I got grouper tacos. They were pretty darn good. And how luxurious to sit at a table in a sparsely filled restaurant and feel safe and eat a meal that someone else had shopped for, prepared, and served to us. And then! To get up and walk out leaving our baskets and bowls on the table! Crazy!
We said good-bye and I headed off to Publix where I got to see Lily who was just getting off work.
"Gibson broke his wrist!" she said.
"WHAT?!"
He'd fallen off a ladder on the playground and landed on his wrist and they iced it but it continued to hurt so they called Lily who was still working. Jason was off though, so he went and got the boy and took him to the Ortho-ER where they x-rayed it and found a very small fracture. Poor Gibson! He and Owen and Jason are going to some amusement park this weekend and how sad that the little guy is going to have to have a cast. There's a water-park thing at the hotel they're staying at and Jason has already ordered a water-proof cast cover. All will be well. It's his right wrist though and that's going to slow him down some. Hopefully he will heal quickly as children do.
After Publix I decided to stop by the  Bad Girls Get Saved By Jesus thrift store where I found something that truly delighted me and I grabbed it up immediately. 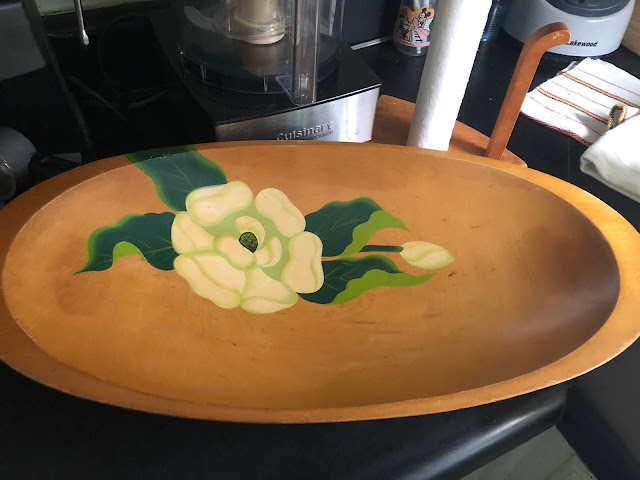 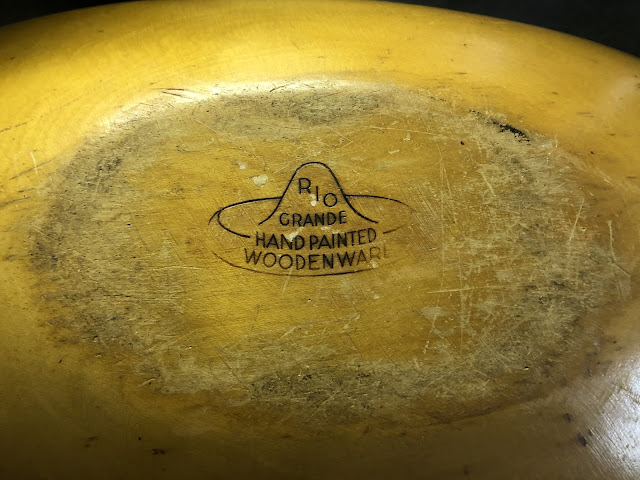 A vintage bread dough bowl with a hand painted magnolia on it. From Mexico. They were asking way more than one would think at the Bad Girls Get Saved By Jesus thrift store but I wanted it and I bought it. Whether I will keep it or gift it away, I do not know but it needed to come home with me. I also got three more plates like the ones I got last time I was there although I had to pay a dollar apiece because they weren't on half-price sale today but that was fine. AND I bought two nice throw pillows (which were on half-price sale) which have already been washed and are hanging on the clothes line.
So between seeing two of my children and two of my grandchildren and finding a treasure, I am feeling much less anxious and morose.
Darla is still sitting on her eggs which at this point have grown shiny from her continual fluffing and rolling them underneath her as she has kept them at the evenly warm temperatures necessary for them to mature and hatch. It won't be long now and I'm glad of that for her. I haven't seen her off the nest in days.
Being a mother is hard whether the babies come from eggs or wombs. You can quote me on that.
Off to make cornbread and heat up the leftover soup.
Love...Ms. Moon
Posted by Ms. Moon at 6:23 PM