The Mysteries Of Life, Or, Well, A Few Of Them 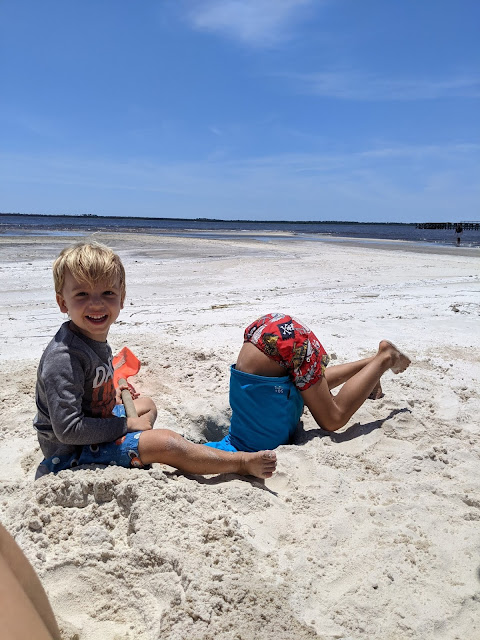 That picture was from yesterday when Jessie and Vergil took the boys to the beach. I think it's deliciously delightful. That look on Levon's face is priceless. I have no idea what August was doing but if it was an imitation of an ostrich, it's a pretty good one.

Today has been the epitome of Sundays. Not in the dark curtain of thick, inky blackness sense which can envelop us on Sundays sometimes- it's been way too pretty of a day for that to happen. But in the sense of being completely nonproductive- well, I knocked that baby out of the park.
I remembered the Sabbath Day and I kept it holy as hell.

I was hanging the clothes on the line, which I consider to be a borderline religious activity, especially on a day like today, when I realized that a yellow fly had stealth-attacked me to the point where I was bleeding. It had gotten my left foot and my right leg. As many of you know, the bite of this particular insect is something I react strongly to and before I knew it, the afflicted areas were itching so intensely that I thought I might go mad. I was ready to take a knife to the bites to cut them out.
This is not hyperbole. I was truly thinking, "So this is how people go insane."
I slathered two different types of anti-itch ointment on them and finally caved in and took a Benadryl. Within an hour, the worst of the itching had passed but my left foot is still swollen like a little fat pink ballon, ready to burst its skin. And it still itches.
Over the last few years I thought I'd gotten a little less reactive to these bites but it would appear that if so, something has happened to reverse that progress. I can hardly bend my toes.

So that sort of slowed me down. Benadryl will do that and a foot that is nothing more than a bursting sausage will too.

I finally finished reading an article in a New Yorker entitled "The UFO Papers: Why did we start taking unidentified aerial phenomena seriously?" It's a very long article and there are no absolute conclusions but it would appear that by golly, something's going on and has been for quite some time. The good news is that if there is intelligent life spying on us or doing whatever it is they may be doing, they obviously aren't interested in destroying us because if they were, that would have happened a long, long time ago.
But the part that made the hair on the back of my neck stand up came in this bit: 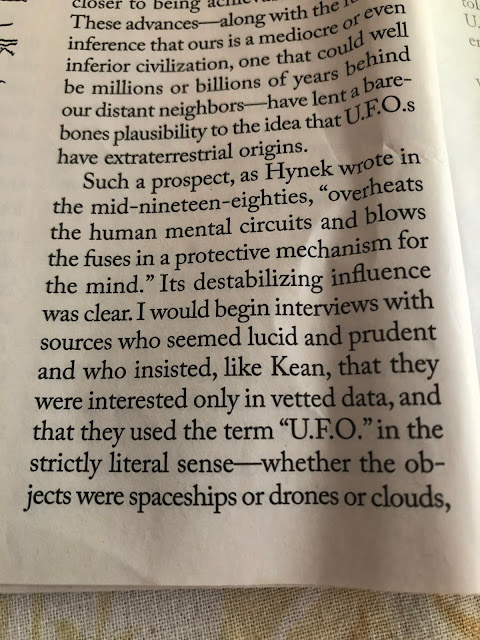 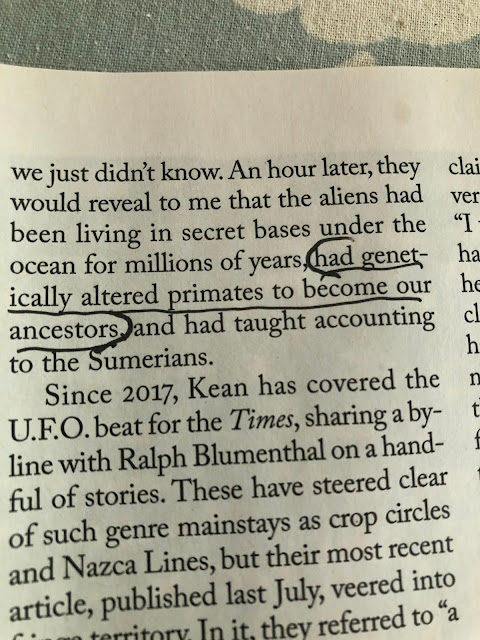 I have been sort-of joking forever that I think that human beings are the result of a genetic experiment between apes and aliens and here we are. It's always seemed eminently possible to me and it still does.
Of course, it could all be horseshit but it makes more sense to me than the virgin birth and millions upon millions believe that crap.
Somehow I've never felt the possibility of aliens on earth more than when I am in the Yucatan Peninsula. I have heard personal stories of sightings of crafts over the sea between the island of Cozumel and the mainland. But what really freaked me out was that once when Mr. Moon and I were visiting the local ruins on the island, we encountered a park employee who...well, I'm just going to say it- she looked like an alien or at least what aliens are often portrayed as looking like. Something like this. 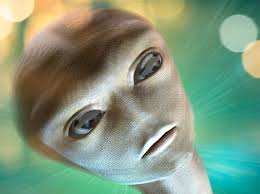 Except more human. Like a person resulting from the crossing of an alien and a human. Mr. Moon and I both noticed her at the same time and our jaws dropped. But there she was, in her green uniform with a badge on, proclaiming her an employee of Zona Arqueologica San Gervasio.
We're still talking about that.
And wouldn't it be perfect for a human/alien cross to hang out at some Mayan ruins?

Well, here's a little alien that I took a picture of on my back porch. 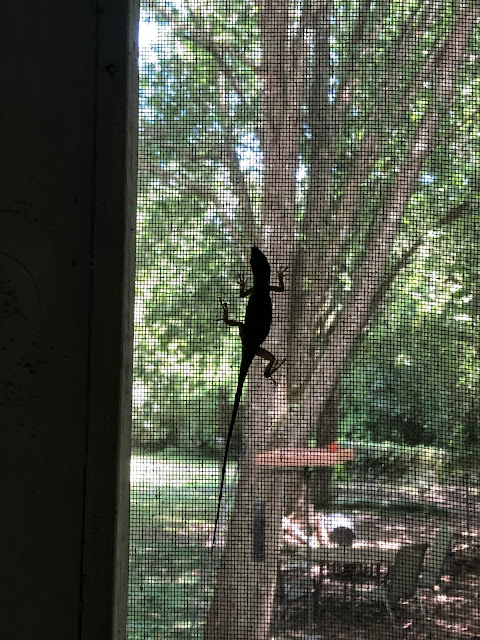 I hope you don't think I've lost my mind and am now venturing into the LaLa Land of conspiracies and UFOligists. I haven't. I promise. And as the article states in another paragraph, "Virtually all astrobiologists suspect that we are not alone."
It's actually less believable that we are the only so-called intelligent life in the universe than it is to think that we aren't.
And this is not something that I feel the need to obsess about. It's just one more interesting thing to ponder as we gaze into the heavens or, alternately, out across the ocean or deep within its depths.
I hope you've had a good Sunday. Get good sleep and let's rock and roll tomorrow when the so-called week begins again.
Okay?
Okay.
Love...Ms. Moon
Posted by Ms. Moon at 6:50 PM