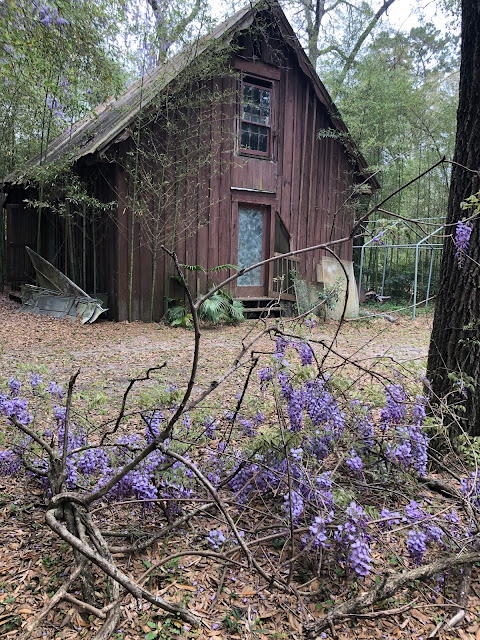 There's the old barn. I took the picture when I was out kicking bamboo this afternoon. That wisteria had pulled down the branch it was on and is laying on the ground.
Well, obviously.
I need to apologize in advance about today's post. I know I'm not in a good place to be writing. I couldn't even bring myself to answer yesterday's comments and I'm sorry but some days are just not good ones for things like that. But I will say that yes- as several of you pointed out, it was Goldilocks not Red Riding Hood I meant to cite in yesterday's post.

It should have been a good day today and in some ways it has been. The sheets I ordered came, the old-lady orthopedic flip flops I ordered came, and some socks that I'd ordered Mr. Moon came too.
I was almost overwhelmed.
The sheets are indeed sateen as hell and I'm not sure we won't be slipping off of them and out of the bed but they could be the best sheets I've ever had. I was afraid to unwrap them from their plastic coverings, telling my husband that for what I paid for them, I really need to love them.
"You can send them back if we don't like them," he said.
"Even after we use them?"
"Of course."
"Oh yeah."
And so I did unwrap them and have washed them once and will wash them again tomorrow for official Friday Clean Sheets Day before I put them on the bed.
My mind just isn't working right these days. Pandemic fog or depression? Anxiety or dementia? All of those things?

Mr. Moon asked me if I'd like to go to town with him. He had an errand to run at Lowe's and wanted to go by a nursery for a few more plants and seeds.
I did not want to go. I wanted to stay home, safe and protected from people and crowds and lights and decisions. But I knew I needed to get out of this house, out of Lloyd, to do something with my husband, to try and be normal. So I went and we stopped at the Hilltop for our lunch which did not help at all as no one there was wearing a mask but us and an even older couple and their granddaughter. We waited at one of the tables outside for our order and damn if a woman didn't play an entire fucking Youtube video on how to make pizza six feet away from us which annoyed me so much that I wanted to scream at her. People seem to have no sense of space these days, no respect for others' space. Do we all think that we are in our own Cones of Silence? If the older people and their granddaughter hadn't been waiting for their order at another table I swear I would have found a video of Stray Cat Blues by the Stones and cranked it as loud as I could.
Ironically, I had already decided to make pizza for our supper tonight. I almost changed my mind.

The nursery was fine and we did buy some more plants and some seeds and for a minute or two I was almost roused out of my dissociation by the thought of growing beautiful red peppers but then I went back under. We drove to the strip mall where Lowe's is and there's a Publix at the other end so I went and picked up a few things we needed there while my husband shopped for what he wanted and then I did something completely insane which was to go into Lowe's myself and buy a floor lamp for the library which I have been needing for sixteen years but have been waiting to buy because I have wanted to find THE PERFECT LAMP and fuck it- just get a damn lamp.
Which I did.
Let there be light, okay? Just let there be light.

Maurice bit me again last night. She was sleeping on the pillow she likes to sleep on and I reached over to gently stroke her head. She was asleep and startled badly and bit the fire out of two of my fingers and I realized that sleeping with her is like sleeping with a war veteran with PTSD who has a gun beneath his pillow and I almost cried. I washed the wounds and put bandaids on them and damn if one of my fingers isn't infected already. I've put Neosporin on it now and will keep careful watch over it. I really will. I don't mess around with that sort of thing.

I don't know what the hell is wrong with me. I read an article in the NYT's that did seem to perhaps speak to what I'm going through. It addresses the fact that there are some people for whom the opening back up of society is not an entirely happy thing. That some of us were relieved when we were given not only permission but instructions to stay at home, to isolate and that for us, the idea of going back out into public is a huge source of anxiety. I almost felt better, reading the article because it certainly resonates with me.
There are other factors, of course, but this may be one.

Anyway, today I tried. As I told a friend on the phone a few hours ago, I am getting up, I am showing up, I am going on.

I am even picking flowers because not to would be a sin. 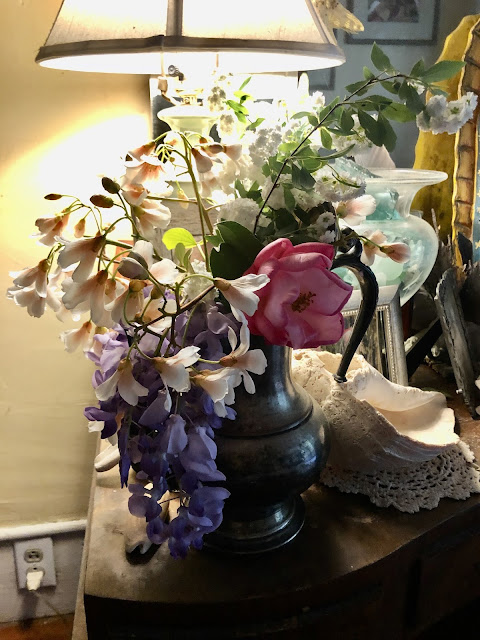 Wisteria, tung blossoms, spirea, and one of the very last Olivia camellias.
I better go make that pizza.
Love...Ms. Moon
Posted by Ms. Moon at 6:22 PM