Bloodied But Not Broken 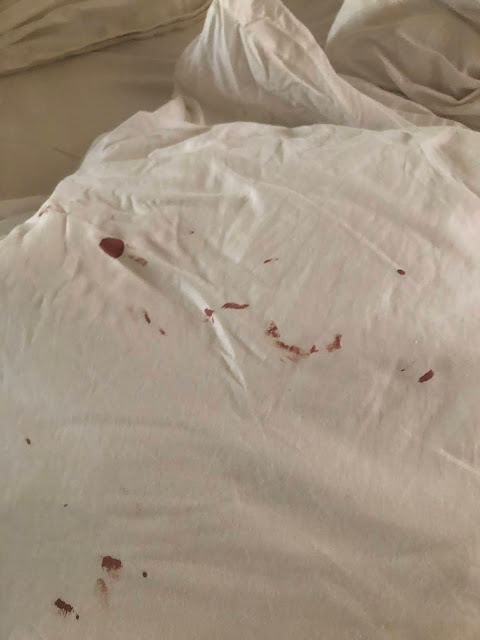 Our bed looked like there'd been a bloody battle fought in it when we got up this morning. Not because there'd been a battle but because our bed-cat-for-the-night, Maurice, went a little insane when something (99% sure it was Jack) was outside the window above the bed. She woke us from a sound sleep, doing her defensive yowling and hissing thing and we both reached for her for some damn reflexive reason and she grabbed me with her claws and teeth and tried to rip the hand off my wrist and managed to stab Mr. Moon at the same time.
It was bad.
That cat's jaw power is not unlike that of a saber-toothed tiger. It is no longer a mystery to me how a cat can open up the skull of a squirrel and eat the brains out of it. I'm pretty sure that she could do the same to me.
There was a bit of yelling that went on after we'd managed to take back possession of our hands and then we were both sort of stunned into silence until finally I said, "We better go check this out and wash our wounds."
Which we did.
My wounds are stab wounds. She didn't have time to tear and rip, thank god. But she did bruise me. Mr. Moon just had a smallish cut but because he's on a daily dose of therapeutic aspirin to thin his blood he was bleeding. We both washed up and he put on a bandaid and we returned to bed. It took me a long time to go back to sleep. I didn't realize we'd managed to bleed all over our pillows, our top sheet and the blanket until I went to make the bed. Everything's clean and sorted out and back where it belongs now but- Jesus.
I know, don't bother telling me that cat bites can be dangerous. We've been through this before. And no need to tell me that we should not sleep with Scratch. I know, I know, I know!
This cat is insane. Not three nights ago she came up to me as I was reading in bed and kissed me gently on the lips. She does this sometimes. I've never in my life been kissed on the lips by another cat. Perhaps she is just trying to suck my soul out of my body when she does this. Who knows?
Not me.
But it's a rather interesting experience. Her lips are so...catlike and thin and cold.
So that was an interesting thing that happened.

I've been holding off on listening to the Spotify podcast "Renegades" with Barack Obama and Bruce Springsteen because I didn't have Spotify. This morning, however, I said to myself, "Screw this, life is short, I absolutely MUST listen to these two men conversing."
And so I signed up for Spotify, basically saying, "Take my money," and they did and I binge-listened to all four of the episodes available as I went about my day. 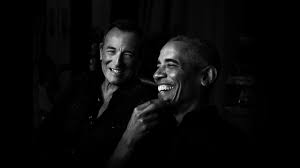 I'm here to tell you that no matter how much I think I love Barack Obama, I somehow discover new depths to my devotion. And pretty much same with Bruce. Two incredibly intelligent men who have become friends, who have absolutely served their country in two vastly different but important ways, and who are both great story-tellers. One of them grew up in Hawaii without a father, one grew up in the small town of Freehold, New Jersey with a schizophrenic father. One went to Columbia and Harvard, one went to one semester of community college in order to avoid the draft.
I am learning things I did not know about both of them. One of the most interesting to me was the story of how Obama came to sing "Amazing Grace" at the church where the folks who were murdered in the Charlotte prayer meeting were being eulogized. They talk about race and how difficult it is to speak about that subject especially with friends, about reparations, about Bruce's relationship with Clarence Clemons and how, despite the fact that they were as close as two people can be for forty-five years, there were still parts of Clarence that Bruce could never quite understand because Clarence was Black. They talk about the American Dream and how it motivated and fascinated both of them while being full of falsehoods and fantasy. They talk about the open road and they talk about music.
Lots of music talk.
In short- I loved every minute of it.
I listened as I mopped the kitchen, as I remade the bed, as I trimmed some more sagos (we have too many sagos), as I polished the refrigerator and strung some of my tiny pots to hang in the kitchen. 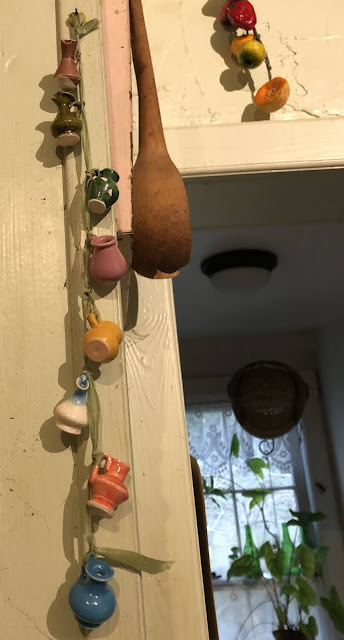 I listened as I swept the front porch and watered the plants. I listened as I took the trash to the trash depot and went to the post office. I listened as I picked greens and washed them. I listened as I kicked a little bit of bamboo.
It was a good day of listening. And not a bad day of getting a few things done.
It got up to 84 degrees here today which is nothing, nothing compared to what it will be soon and still- I did not like it. As I told my husband a little while ago- I'm already tired of being hot after one day.
And I am.
Tough titties, said the kitty. 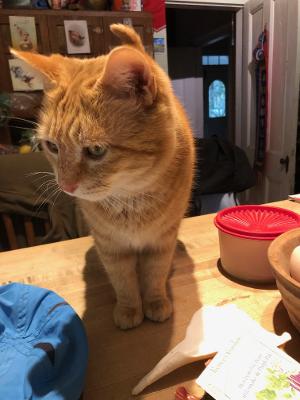 Tough Kitty Murder Cat.
When I asked Mr. Moon this morning what he wanted for supper he said, "Clam spaghetti and the salad with the little oranges." And that is what he is getting. Chop an onion, smash some garlic, open two cans of minced clams, boil up some pasta, cut up some greens, add some canned mandarin orange sections and sunflower seeds, make a dressing with some of the juice from the can, some olive oil, some white balsamic vinegar, some Tamari, heat up some sourdough, DONE!
It really is a fine supper.
I could talk for hours about having to change the clocks tonight and losing an hour but I won't. I'll just say- oh, dear god. Again?
Humans are weird. So are cats.
Love...Ms. Moon