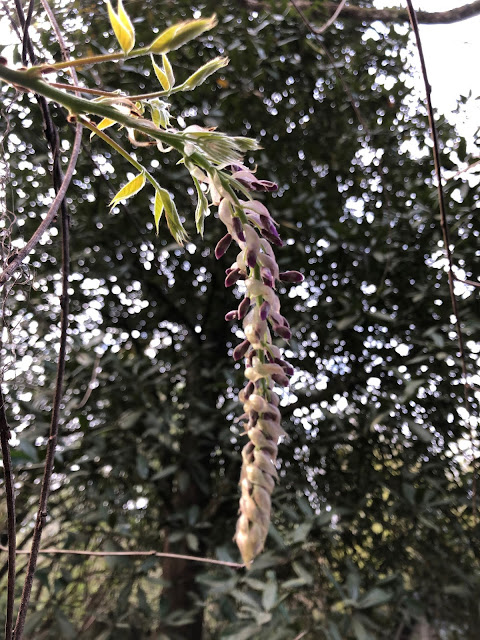 Here we have a dangling wisteria bloom, about to burst into flower. Since I took that picture this morning, some of the blooms have already revealed their purple faces. When it happens, it happens fast.

We had two fine visitors today. Jessie went on a beach adventure with Vergil and the boys yesterday instead of letting them go off alone so that she could do her shopping and so we told her we'd take them for her today while she went to the stores. And we had fun.

Mr. Moon had ordered some spark plugs for the tractor and they had arrived so there was a spark plug replacement tutorial today. 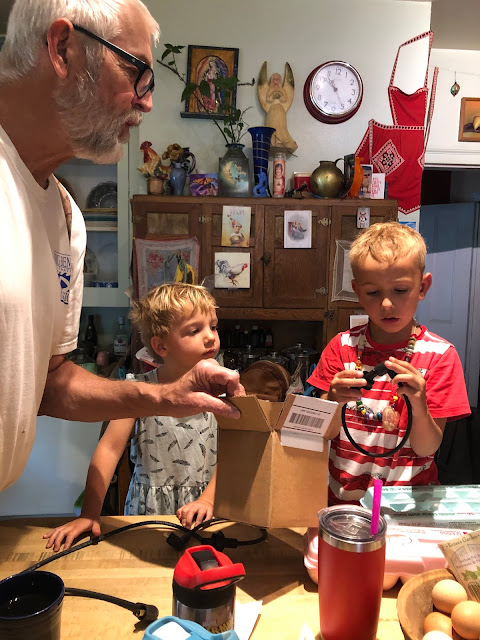 It began in the kitchen with unboxing and then proceeded outside for the actual work. I did a little work outside myself, cleaning out the hen house. Levon tore himself away from the tractor for a little while to come and discuss chickens and poop with me. He offered to help but I told that he didn't need to get all poopy. August spied a tiny little oak snake in the garage when he and Boppy went in to get something and Boppy took it outside where we all looked at it. He said that he walked right by it but that August saw it right away.
As I told August a few hours later when I was trying to thread my sewing machine needle, young eyes are the best eyes and he should do as much looking now as he can.
Lunch was a circus and a pickle-tasting. It's always exciting, trying to figure out who gets which plate, who gets which drinking vessel, who wants this on their sandwich, who wants that. Levon had already eaten a rather large carrot from the garden and wasn't very hungry but August was. I really do not know where the child puts all that food. I mean, I really don't.
Both boys wanted pillows, of course, and so I told them that we'd make them but I wanted them to help. And they happily did. I don't know why but I just love showing them how the sewing machine works and talking about that whole process. The cutting out, the pinning, the filling of the bobbin, the threading of the machine. They are so impressed at fast I can sew. Of course, they've never seen anyone else sew so their frame of reference is a bit skewed. They had questions. What is this for? And this thing? What does this do? Why do you need to back-up when you're sewing? Why don't you sew backwards all the time? We even had a little history lesson about Isaac Singer who I mistakenly told them had invented the sewing machine. We talked about how women made all the clothes and sewed the curtains and tablecloths and EVERYTHING and how sewing machines made that so much easier. It even got down to the level of "How many stitches are in clothes?"
"Hundreds."
"Five hundred?"
"Probably more."
They each stuffed their own pillows and when August asked Levon what the stuffing felt like, he replied, "Precious."
He's precious.
Levon got quite impatient for me to finish stitching his pillow up after he'd stuffed it to his satisfaction. I was stitching August's pillow by then and I kept telling him to be patient. Finally I told him, "Don't have a cow!" which they both found hysterical.
When both of their pillows were done, they were so very happy. I'd tried to sell them on the idea of pillow cases but no, they knew I had stuffing and they wanted to use it. August told me that I could make his pillow with the stuffing in some "white material" and then use the other material with a zipper on it to cover that. I guess he's been studying pillows and how they're made. I assured him that I would not be putting a zipper in his pillow.
No way. No how. I haven't put in a zipper for thirty years and I don't plan on doing it now. 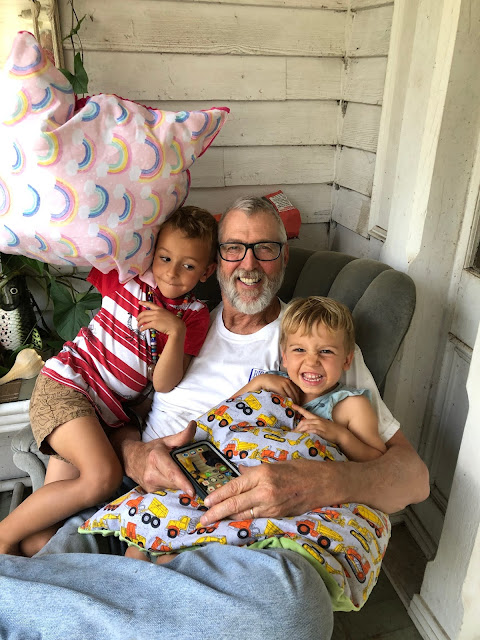 They were satisfied with what they got.
I looked up Isaac Singer online and had to admit to August that I had been wrong about some things. Mr. Singer did NOT invent the sewing machine. He just stole the idea and patented it. He also had twenty-four children being, "enthusiastic about women" as one short bio of him I read described him. When he died, he was in possession of 13 million dollars which was a huge sum of money in 1875. So I learned a lot too. And overall, it was just so much fun to talk to the boys about things, to tell them that my sewing machine still worked so well because my grandmother took good care of it and then my mother took good care of it and now I take good care of it. They told me that when I die they will take care of it and that thought makes me so happy. I told them that if they did, maybe someday they would be making pillows for their grandchildren on it. I don't think they were able to truly envision this but it's a cool thought.
They got to ride around the yard on the four-wheeler with their Boppy and they also got to watch a little TV. All-in-all, it was a most enjoyable day. And educational! When their mama got here they were ready to pack up and go. They took their pillows and each got SIX M&M's which was a rich bounty for them.

I hope they sleep well on their new pillows under their blankets. The thought of that makes me happy too. They are sweet, cheerful fellows and watching them grow and being part of that process is such a joy.
Time to go make the pizza. Are you cooking corned beef and cabbage tomorrow? Or cabbage and potatoes and carrots if you are a better person than I and don't eat meat? I'm going to be simmering my own cabbage and carrots with my potatoes and corned beef. I am looking forward to that.
And also looking forward to seeing more blooming wisteria.
It's good to have things to look forward to.
Love...Ms. Moon
Posted by Ms. Moon at 6:25 PM