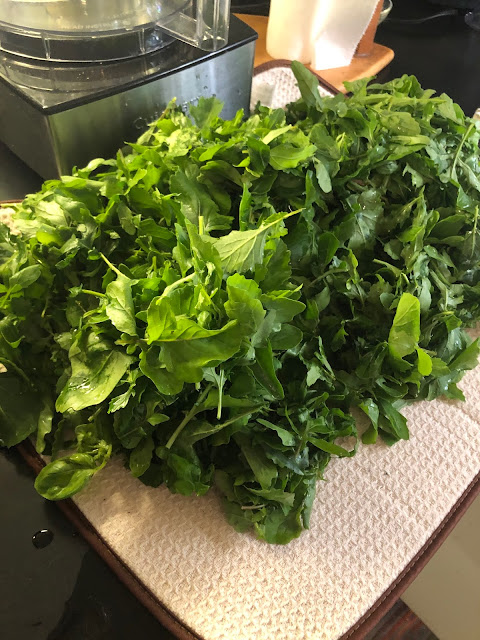 That is just a part of what we "harvested" today. I used the quotation marks because the word harvest brings to my mind endless fields of wheat or something wheat-like being harvested by something like an International Harvester (and wouldn't Levon love one of those?) and we just go out into the garden and pick.
Anyway, that's arugula that Mr. Moon pulled because it was bolting and he needs room to plant tomatoes and peppers but instead of just trashing the mature plants he carefully picked the leaves off the stems. I did that last year and I helped some today but he did most of it.

It's been a busy day for the old woman here. Lily suggested a get-together and we decided on lunch at her house while the boys were on their lunch break from Zoom school so I went to Costco and bought some of the wraps that we all like as well as some cut-up fruit and we had a delightful time on the deck in the beautiful weather eating our wraps and fruit, some vegetables that Lily cut up, and some leftover tabouli from the party. It's not a traditional tabouli that Lily makes but one with quinoa and lentils, and all the vegetables that one generally finds in it and it's so delicious. I brought some home with me.
I think that Lily will be most grateful when the kids return to bricks and mortar school. Owen is eager but Gibson, strangely, is not. Maggie will be starting kindergarten next year and it'll be good for her to be in a classroom situation. She's getting a little too used to being the only girl/youngest child/princess in the world.
The world of her house. She has recently taken to telling her mother and brothers that she is the head of the city.
The city, also meaning her house, I guess.
She's mighty sweet though. When I came in she brought me a doll to take home. I told her that I really didn't need a doll and as much as I appreciated that, she might miss her doll. But she insisted. So I did. 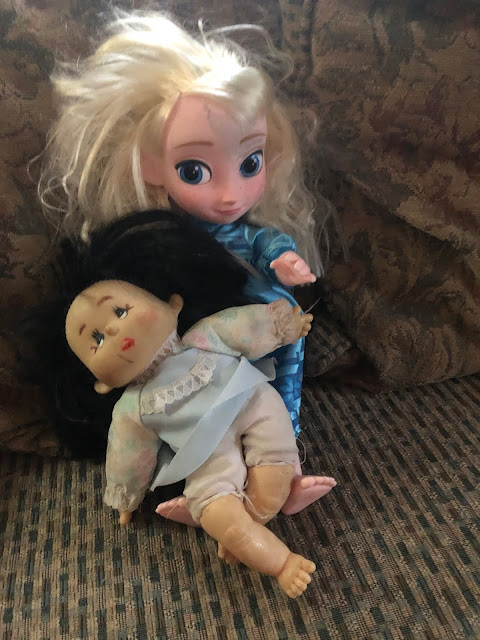 Maggie's doll at Mermer's house, holding one of the dolls who lives here. Maggie advised me to brush her doll's hair every day. "It's weird," she said. She's right.

I guess she is the boss of the city. And honestly, all of my grandchildren are the boss of me and I know it. So do they.
They're pretty sweet bosses though. I was wearing a blouse as sort of an over-jacket today and both Maggie and Owen told me how pretty it was. I thanked them and told them that my friend Lis had given it to me.
"She gives me all my pretty things," I told them. Gibson, who was sitting beside me said, "Not your pretty face."
"You stole my line!" shouted Owen.
I mean- that's sweet.
And Maggie let me read her a library book which was lovely. It was the story of a pony named Snowy Pony (I think) and seven miniature ponies. Yes, elements of Snow White and her seven dwarfs as well as a few homages to Little Red Riding Hood. ("This stable feels just right!")

When I came home I cleaned out the hen house and helped Mr. Moon pick leaves off the arugula and did some sweeping and made some arugula pesto. It's so beautiful. I toasted some pecans and pine nuts to go in it and I highly recommend doing that when making pesto. 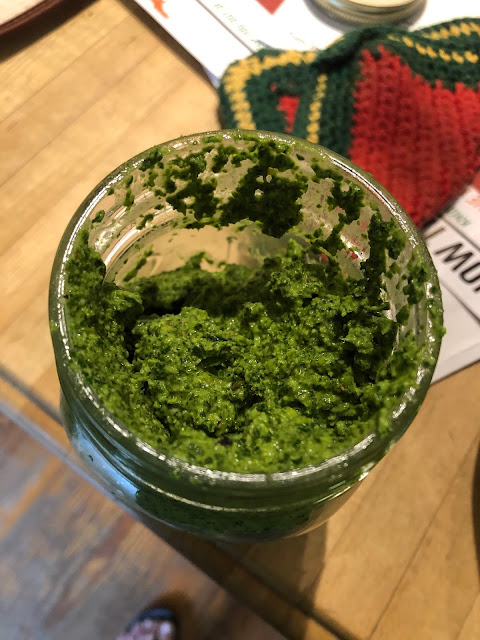 The roofers that Mr. Moon hired to repair the garage roof have been here since before I got up this morning at 8:30 and are still working as I write this and it's after six.
I have no idea how they do this. It's beyond my imagination.
And so it has gone today. I'm tired from my puny little efforts, feeling my age. I listened to two more episodes of "Renegade" as I went about my afternoon. There will only be two more. There is a lot to ponder in what Springsteen and Obama discuss. I'm glad I live in a time when such things are available. People's stories and beliefs, experiences and discoveries. Same with blogs, you know?
And underlying all of these stories is the realization that no matter who we are, where we live, what sort of lives we've lived, what color our skin is, how we were raised, or who our ancestors are, we share so much just being human.
And how much we have to learn about each other. And from each other. Pretty amazing.
That's it for me tonight.
Love...Ms. Moon
Posted by Ms. Moon at 6:22 PM