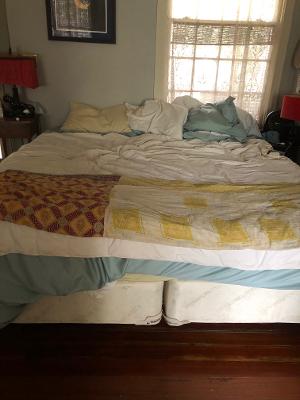 This morning August woke up first. It was barely getting light outside and he came and crawled in the bed with us and I held him to me and said, "It's not time to get up yet, baby. Let's sleep a little more."
"No," he said. "It is time."
"But I have to finish the dream I was having," I said.
"Okay," he said and he was very quiet and very still and I went back to sleep and then when it was a little bit lighter, Levon popped up and crawled in bed and said, "I want to snuggle!" and August said, "No. Mer is going to tell us her dream," but then Boppie woke up and Vergil came and collected the children and we both slept a little longer.

Jessie had an appointment in Thomasville at ten and Vergil and Mr. Moon got started on some major, MAJOR garage clearing-out, which Levon insisted on participating in all day long. They worked from early to late, and have just left. August was my buddy for most of the day. We had such a good time. He was a good kid and even made Mr. Moon's and my bed for us. As you can see above.
When I saw what he'd done I started to say, "Let me show you how..." and then there was going to be a lesson on smoothing out sheets and re-tucking them but I thought better of it and instead said, "That's wonderful! Thank you so much! What a beautiful job," and he beamed.
His dad had made him a crown this morning out of a used-up Cheerios box and he wore it all day long. It had a rainbow on it. 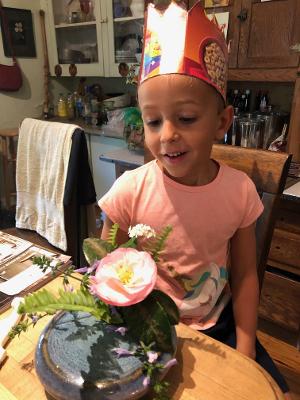 We went outside and picked things to make a little flower arrangement and he was all about that. We talked and talked and talked about many things, including Frida Kahlo and Mexican cooking. The boy is a talker and he's got a lot of ideas; his brain is a sponge and he soaks everything up. Here's a picture I took yesterday of him and his dad and his Boppy talking after the basketball game. 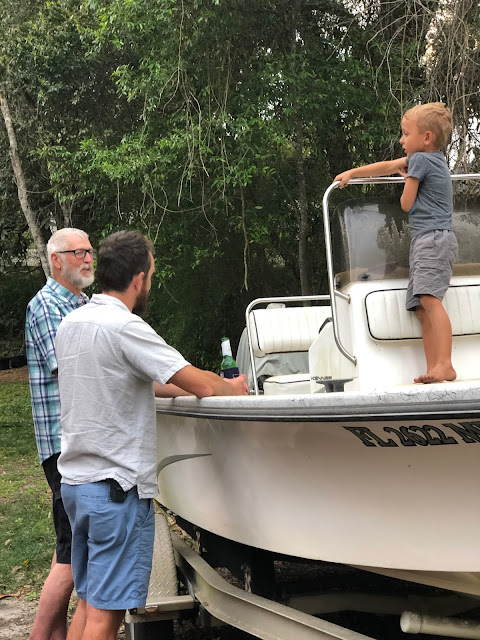 And we read so many books today that finally I caved and said, "August, I think this is enough."
Not sure I ever thought I'd say that but we were on page 120 of a Richard Scarry book and that was only part of what we read. Levon joined us for some of the books after lunch but eventually he had to go back outside and see what the men were doing. He was so dirty when he left here that it might take a bath and two showers to get him clean tonight. The black dirt of Lloyd is going to find its way to Tallahassee. 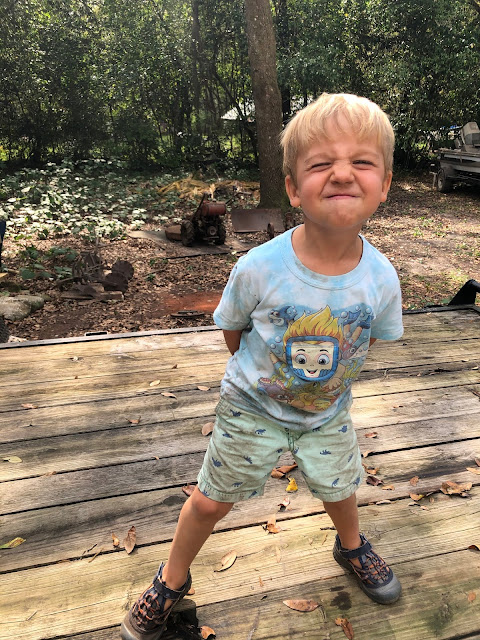 He's such a guy.
When the work day was over, Boppy took the boys on a little four-wheeler ride which they loved. 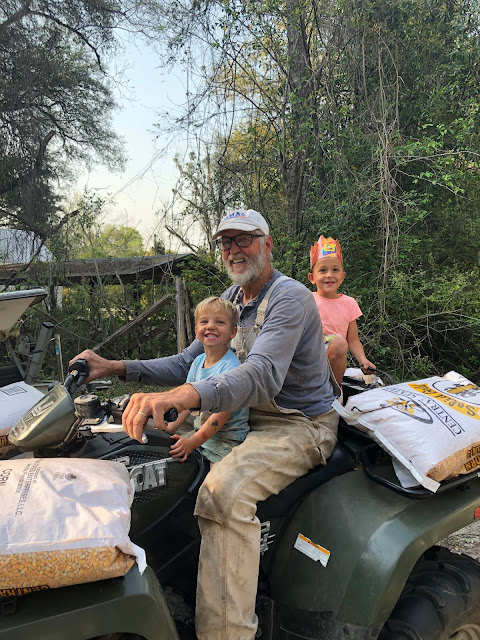 They putt-putted slowly around the yard a few times, August with one hand on the brace back there and one hand tightly gripping his grandfather's overall strap.

I think that Boppy is exhausted and I am too. Been a lot of activity going on the past two days. FSU didn't win its game yesterday but I think everyone had a good time. One of the guys who came over is someone I've known forever and the other forever and a day. Both had had health problems, severe ones, and it was a joy to see them even if I didn't watch one minute of the game.
I'm going to whip up some eggrolls here- one of Mr. Moon's favorite meals. I picked another cabbage from the garden and have some other stuff to go in them.
And oh! A few of y'all asked me about the golden seal and where I get it. I'm afraid I'm not going to be real helpful there. I use the golden seal root powder and I've always bought mine from the local co-op. The same place Billy and May work. It's sold in bulk and when I buy it, I only get a very small amount. It costs a fortune but not when you buy a tiny bit. Here's the bag I have right now and that'll last me forever. 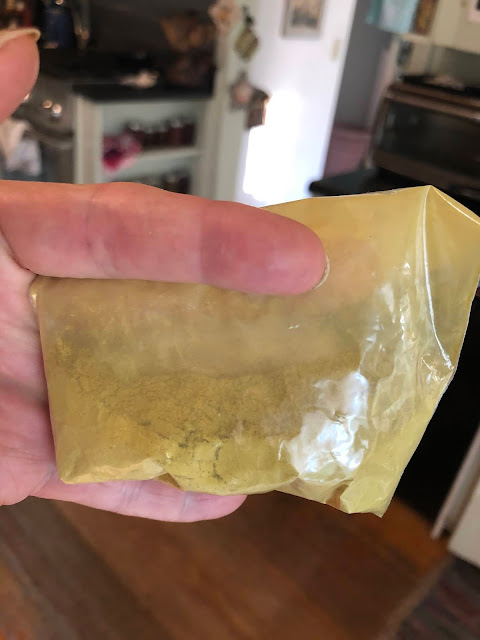 I literally scoop the amount I need out of the bag on the end of a tiny cocktail fork.
They keep it behind the counter at the co-op because it is so expensive and I guess people steal it. Also, some years ago it became a common belief that drinking a tea from it could aid in getting a clean piss test. This is not something I know anything about because thank god I've never had to be tested in that way. Also, because it's the most bitter shit on earth. It tastes nasty. I have only ever used it topically. And I must say that once when I was using it on a wound on my husband's foot, he had a horrible itchy reaction to it. He's the only person (or critter) I've ever known to have that reaction but I'd be amiss if I didn't mention that. My finger where I've been using it in conjunction with the Neosporin is about 90% free of redness and tenderness now. I'll probably slap a little more on there tonight and put a bandaid over it before I go to bed but I am pretty sure I'm out of the woods with the fear of dire bacteria.

Last night with the kids sleeping in our room, Maurice would not set paw into the room, much less jump up on the bed, and Jack gladly took her place. It was so nice to feel his solid body against mine. As I was falling asleep, I was stroking his soft back and when I quit, he tapped me on the leg to tell me to continue.
He's a normal cat. If there is such a thing.
Once in awhile, normal is good.