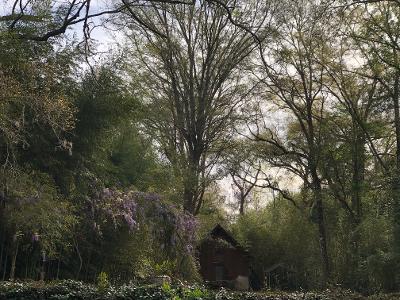 Isn't that sort of gorgeous? I probably should have edited it somewhat to bring out the colors but I like it the way it is. It looks to me like a very old painting. That's the old barn at the east end of our property with the wisteria in the bamboo and trees to the side and the new green of the oaks coming on. Our leaves fall in the spring, believe it or not, as the new leaves push the old ones off with their verdant enthusiasm.

I had no plans for today so it was nice when Jessie texted and asked if I wanted to go shopping with her and the boys. I texted back that I didn't really need much of anything but that she could bring those wild guys out here so that she could shop without their help. And that's what happened. I had such a good time with them!
Here's how it goes when they get here- they pop out of their car seats and I meet them outside. They say, "Is Boppy here?" If I say yes they say, "Where is he?" and then race off to find him. If he's not here they  trudge into the house, heads down in vast disappointment.
It's okay. I know they love me. They just have to get all the shine off their grandfather before they start remembering that I can be okay too. Plus- when Boppy's here they know there's more chance for TV watching. Why we have evolved things to be like this, I do not know but that's the way it is here at the Moon house.

Today Boppy was working on what Levon is absolutely certain is his "race car" which is the car that is going to be built out of the engineless car and the wrecked car with the good engine. He is enamored beyond belief with this project. August is interested too. Today they helped him bag and label parts that...well, I don't know. Have some importance. Perhaps Mr. Moon plans on selling them as they are extras he doesn't need. I really don't pay much attention to these things. After awhile I made them come in for lunch and both boys were discussing things like horsepower, which is faster- race cars or monster trucks, and things like that. They were also racing around themselves, demonstrating how much turbo power and horsepower they have.

We read books after lunch which you know is always my favorite. Not only do I get to read books out loud, but they smash their little bodies up against mine as I read to them. Today August needed to pat my arm repeatedly for some reason. It didn't bother me and it amused him so that was fine. He was quite gentle about it. I think he likes the way my old flesh feels when he pats it.

After books there was a little TV and then there was a most exciting adventure- going to the dump with Boppy! They got to sit in the front seat of the truck sharing a seatbelt! The glory! The joy! The daring! (It's about a block to the dump place.) 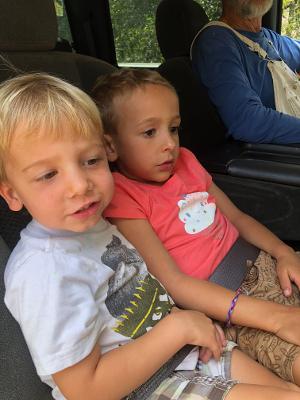 They made it there and back, all in one piece.
Sadly, there were no treasures to bring home.
And then there was more dealings with vehicles and then there was a game of Battle and then Mama came to get them but they had to show her the race car and then August made Levon haul him back to their car in the garden cart. 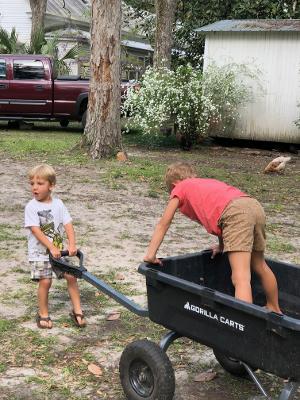 To tell you the truth, he did not make Levon do that. Levon wanted to. That kid would pull the cart to Georgia if given the chance. After he delivered his brother to the car, he pulled the cart back to where we keep it. And then before they left, there was a repeat of the whole scene. It's funny- they're not unhappy at all for their mother to get here to take them home. They're glad to see her and they don't whine or fuss but for whatever reason, it takes at least half an hour to get them loaded up into the car.
"I love you so," I told Levon when I gave him his M&M's.
"I love you so too," he said as he happily put one of the candies in his mouth.
"Thank you for letting me read you books," I told August when he was all strapped in and ready to go.
"You're welcome," he said.
Haha.
After they left I got the clothes off the line. We are being inundated with tent caterpillars right now. I mean, they are EVERYWHERE. On the porches, on the ground, on the spigot handles, in the garden cart, on the plants, along the fences...everywhere.
Even the clothespin bag. 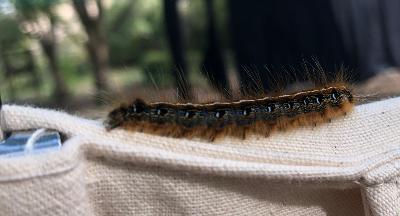 Luckily, they do not sting if touched and are not really harmful to plants. The chickens, however, will not eat them. They will become moths in a few weeks. Meanwhile, I feel quite certain that I will find a few in the clothes I hang on the line.
Florida. Oh, Florida! How I love thee!
Another day, another critter.
Love...Ms. Moon
Posted by Ms. Moon at 6:19 PM