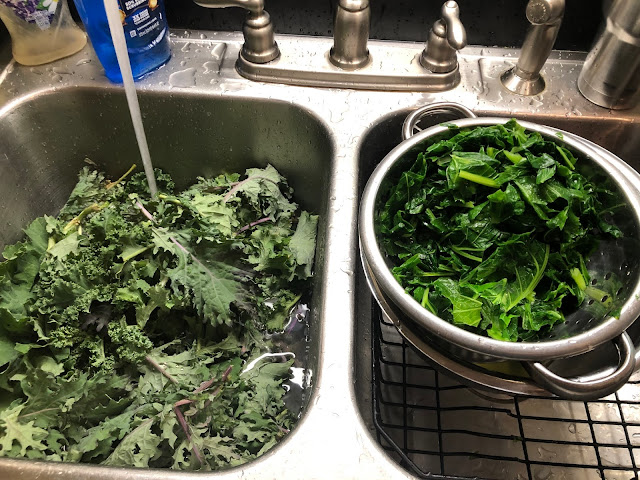 Last night I told my husband that my foot felt better after spending a good portion of the day off of it, reading books to August and so forth. "If I would just stay off it for a week, mostly, I really think it would help."

He agreed. Said I should.
So what did I do today?
Decided that since it wasn't burning up hot I'd go work in the garden pulling bolted greens and processing some of them.
Because of course!
But it is that time where things have got to be pulled out to make room for the tomatoes, eggplants, peppers, squash, and so forth. And what a shame and a sin to waste all the goodness still there in the leaves of my beautiful greens which have given us so much pleasure this winter. So. I did what I did. I pulled the rest of the mustard greens and picked the leaves off of them. 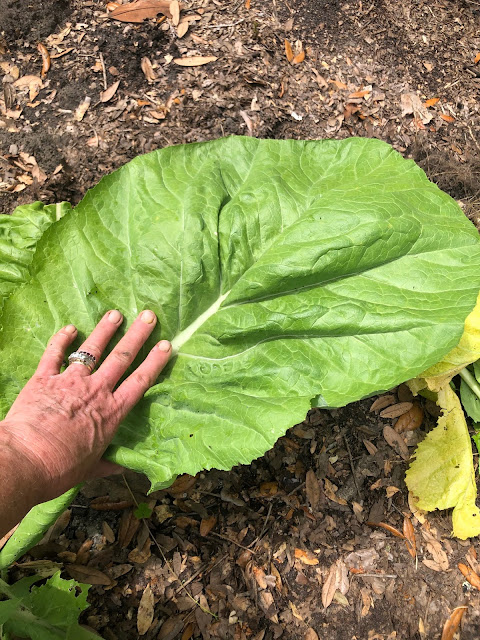 This is how big a mustard leaf can get.

That's one of the batches up there on the right after I'd blanched them. I have four quart bags of those in the freezer now. I didn't pull all the kale but did pull a half row and that's what's soaking there on the left. It, too, has now been blanched and made about half a gallon's worth to bag and put in the freezer. I've still got a goodly amount of collards that I pulled and stripped leaves off but I just didn't have the energy today to finish those up.
It's quite a process to get the greens ready for freezing. Pick them, get rid of the leaves you don't want because of bug damage or yellowing or whatever. Wash them, wash them, wash them. Drain them. Cut the stems out of the biggest ones and then roughly chop them into bite-sized-ish pieces. Throw them in a big pot of boiling water for a few minutes, drain, put in an ice bath, drain again, and then bag them.
The Thermonster is a beast of a food processing stove. It can bring a huge pot of water to boil in about a third of the time it took my old stove.

The whole time I was doing this I felt like a pioneer woman who wasn't really a pioneer woman at all in that pioneer women did not have freezers, freezer bags, ice makers or Thermonsters, while at the same time wondering if what I was doing was going to be worth the damn work.
Maybe.
Maybe not.
I have to laugh sometimes when I read the comments on the pictures of old Florida houses that are posted in a FB group I follow. Everyone seems to envision a time when life was so simple and people sat around on the big front porches and sipped iced tea and gossiped and watched the kids play in the yard. There may have been some of that but trust me when I say that SOMEONE in that household (and it may have been mostly the hired help but certainly not all if any) was chopping the wood and keeping the cookstove going to brew the tea on and where in the hell did they get ice? Were they lucky enough to have a pump in the kitchen where they could get water or did someone have to haul it? Who was getting the supper ready? The giant mid-day dinners to feed all the people needed to work the fields and keep the houses running? Who was doing the washing up after all of that cooking and serving? Who was growing the gardens to make those meals out of? Who was taking care of the farm animals? The cows and the chickens, the horses and the hogs?
Who cleaned the outhouse? Who dug the new one?

So I was thinking of that today and I was also thinking about the things I use most in my daily life when it comes to getting chores done and no, it's not my beloved food processor or KitchenAid or fancy kitchen gadgets of any sort. It's the big tin pan I use to put weeds in when I pull them, the giant plastic bowl I use to wash greens in or hold chopped greens in. It's the garden cart and the old canning kettle with rusted-out holes in the bottom that I also use in the garden for weeds and whatever needs toting. It's my garden trowel!
Now don't get me wrong. I don't think I could last a week without my cast iron, my knives, my coffee maker. And I love my food processor and my KitchenAid, my beautiful new stove, my refrigerator that makes ice and good Lord don't get me started on how much I love my washing machines both of clothing and dishes. But by golly, it's those old seemingly-worthless things that I grab almost daily that serve my needs so well. Hell, my favorite biscuit pan is one I found in the yard. It's aluminum (the devil's metal) but very, very heavy aluminum and I know it came from Sears And Roebuck because that's what it says on the bottom of it. 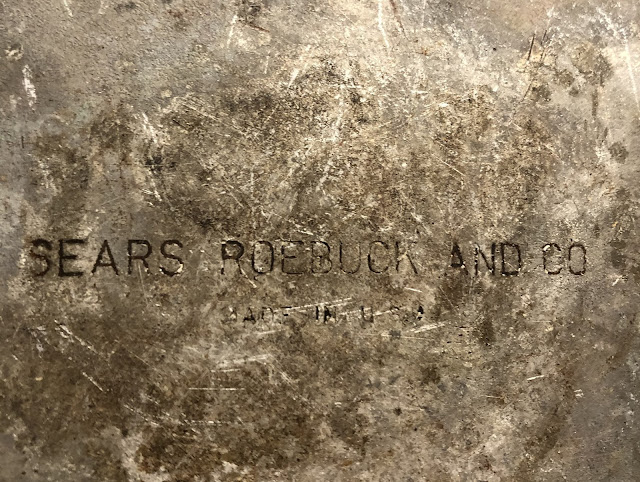 And I swear- the tool I absolutely cannot do without in chicken-tending is an old hoe-head that I use for scraping chicken shit with. The second I found that thing I knew exactly what I needed it for. It's like some random piece of my DNA jumped up and danced, hands raised above heads shouting, "Oh yeah! Oh yeah!"

Well, that's all I have today. Tonight's menu will include a small red snapper that's been in the freezer along with a few shrimp, cheese grits of the sort that take an hour to cook because they are REAL grits, and probably a salad. I forgot to mention that I picked all the lettuce except for the butter crunch which is still growing nicely.
Last night's egg rolls made with our own head of cabbage were supremely delicious. The difference in vegetables that were picked a few hours before they were cooked and the vegetables you can buy at the store is vast.
Life is fine for me, at least, in Lloyd today. My foot may not feel better but my soul surely does.
Love...Ms. Moon