We Had Him For Eighty-Four Years; I Guess To Ask More Would Have Been Just Plain Selfish 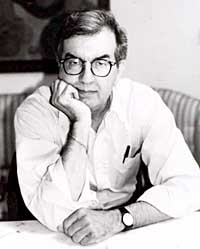 That's the picture of Larry McMurtry that was on the jacket of probably every book I ever read by him. If one searches images of the author, it is easy to see that he was probably not a man who was hugely vain about his appearance although who knows?
Certainly not me.
What I do know is that this morning when Hank alerted me to the fact that McMurtry died last night, it struck me hard. It was one of those situations where you've known for years that the man could die anytime and he was eighty-four and so yes, of course, people die, all of us, Larry had to as well but as I replied to Hank's text, "Fuck, fuck, fuck. Goddammit."
I just wasn't up for that news this morning at all.
I went out front where Mr. Moon was putting up a mailbox and I was crying so hard I couldn't get my words out and he said, "I know he meant a lot to you."
Indeed he did. Indeed he did.
I'll be the first to tell you that some of his books were not that great. Look- he wrote over thirty novels and a shit-ton of works of non-fiction and many, many screen plays and who knows what else? He also happened to own one of the largest antiquarian bookstores in the country. I think that was probably the true love of his life's work. The bookstore was in Archer City, Texas where he grew up. He described it as something like, "In the most bookless city in the most bookless state."
I always thought to go visit it someday and to have breakfast or tacos at the Dairy Queen which was the center of so much activity in so many of his books about the people and lives of a small town in Texas he called Thalia.
The last book I read by McMurtry was The Evening Star and I have no idea the number of times I'd read it before that reading. I think it was during the beginnings of the pandemic and that was a typical reaction for me. To reread one of Larry McMurtry's books filled with characters that I had grown to love so much over the years. His books had prequels and sequels and I often said that it was as if the man had a special way to simply look at the actions and listen to the words of this parallel universe that he had indeed created and taken down what was said, described what was done.
His writing was as plain and clear as I imagine the sky was over his Texas home. And that was the writing I needed whenever I was too depressed or anxious or scared or in pain to read anything else. His ability to capture the smallest moments, the everyday pain and joy of people who were only remarkable in that he had focused in on them, was magnificent. There are scenes from his books, some of them only a paragraph or so, that are as well remembered and genuine to me as scenes from my own life.

I remember when Lonesome Dove was released. My friend Sue and I, both book lovers and readers of the highest order, read it at the same time and were immersed and we fell in love with Gus and Captain Call and all of the cowboys who busted all of the cowboy myths as they moved a herd of cattle stolen from just over the border in Mexico to Montana. We knew immediately that the book would become a movie or a series and it did and we spent hours talking about who would play Gus, who would play Call, who would play Clara, who would play Bolivar, the cook? Turned out to be brilliant casting and one of my favorite actors of all times ended up being Gus, one of my favorite fictional characters of all times. He and he alone could speak the words that McMurtry had given to his old Texas Ranger.
Robert Duvall.
It was a moment of perfection in history for me. And as far as I'm concerned, Lonesome Dove is the Great American Novel.
It is MY Great American Novel, anyway.

I remember reading one of McMurtry's shorter books out loud when Glen and I took a road trip once in the west. California, Nevada, Oregon, Washington. The book was The Desert Rose and I later learned that he dashed that one off when he was in the middle of Lonesome Dove and it was perfect for our ride being about a show girl from Las Vegas which we did indeed visit and there is a scene in that small book that is one of the ones that will stay with me forever. Which is as real as anything I know.
And then, in true McMurtry fashion, he wrote a sequel to that which was pretty awful but you know what? I doubt that every one of Einstein's equations was as groundbreaking and grand as E equals MC squared. Sometimes I think that McMurtry just loved his characters so much that he had to write more about them to see where they went after The End. And it showed. If ever there was an author who was more tender towards his characters I do not know who it would be. They all carried a sense of melancholy about them. I think every one of them did. But they all carried humor and amusement too, as the best people who perhaps think too much often do.

I guess that's enough about Larry for now. I am remembering reading Duane's Depressed to Mr. Moon on various car trips and even though I have probably reread that book more than any other book I've ever read, I still could hardly get my words out when it ended.

Just like today when I told my husband that McMurtry had died.

It is Friday. Mr. Moon is in Tallahassee visiting with his oldest friend from college and his wife who are in town for the night. I was invited of course, but didn't entertain the thought of going for a second. I told my husband, "Just tell them that I suffer from an anxiety disorder and cannot make it."
"Already done," he said. Tenderly, even.

He put my lamp for the library together today. 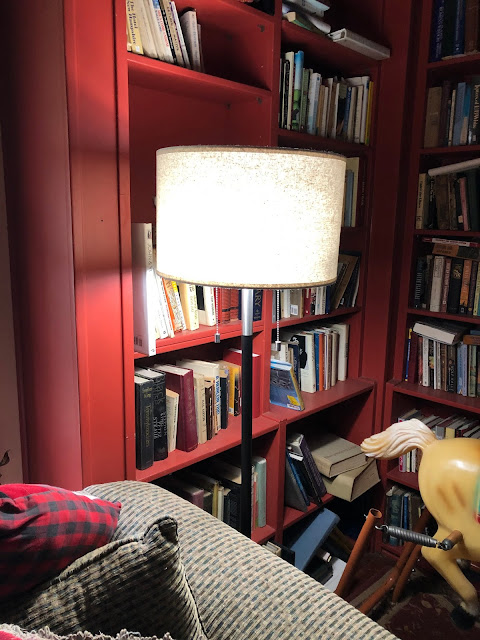 I will no longer have to use a flashlight at night to find the book I want. 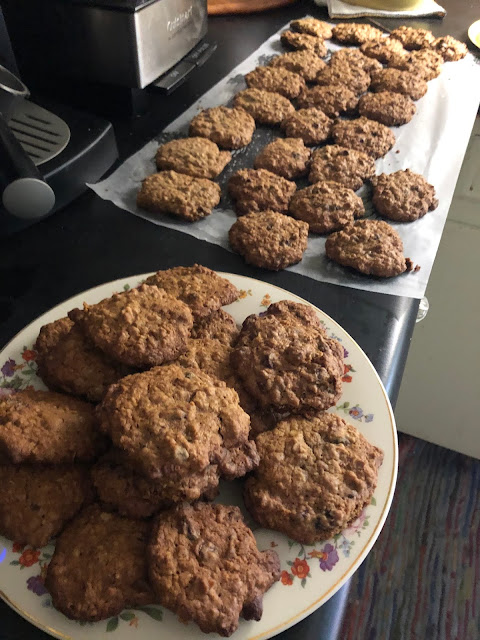 His favorite- oatmeal, raisin, pecan, chocolate chip.
I've also made up the bed with the new twice-washed sheets.
And lastly, I've made my own martini and when I took my first sip I raised my icy glass and said, "To you, Larry. Thank you for more than you could ever know."
Happy Friday, y'all.
Love...Ms. Moon