Here And Now, And Back Then Too 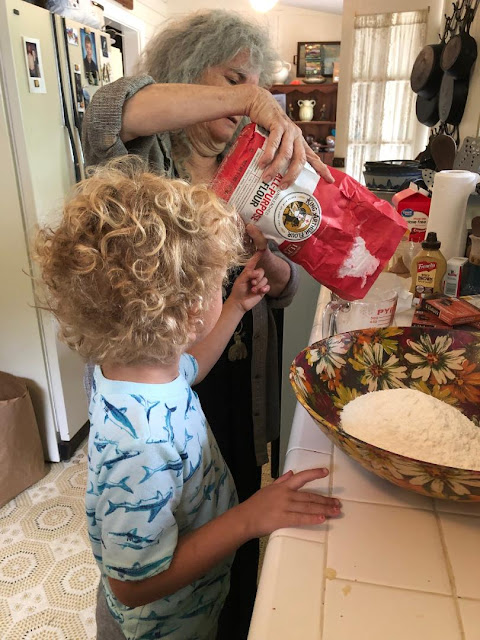 This is what was going on in my life two years ago today. We were at Gatorbone, the home of Lon and Lis for their traditional St. Patrick's day weekend gathering of the friends and loves and musicians for music and food and general springtime joy. It was August's first visit to Gatorbone, I think, and he was the happiest three-year old you can imagine. Do you remember those curls? He was helping Lis make a cake in her sweet, sweet kitchen which is where I spent most of my time that weekend because that is how I like it and Lis lets me.
I think about that weekend now and it seems as if we were in a different lifetime, a different universe. If you want to read about that weekend, you can go here.

I would love to reminisce and relive it here but I've been in a bit of a dark place lately and it seems to me that going over all of my best memories only makes me sadder. I'm not sure what's going on but it's just the way it is right now. But here- here are some more pictures of that weekend. 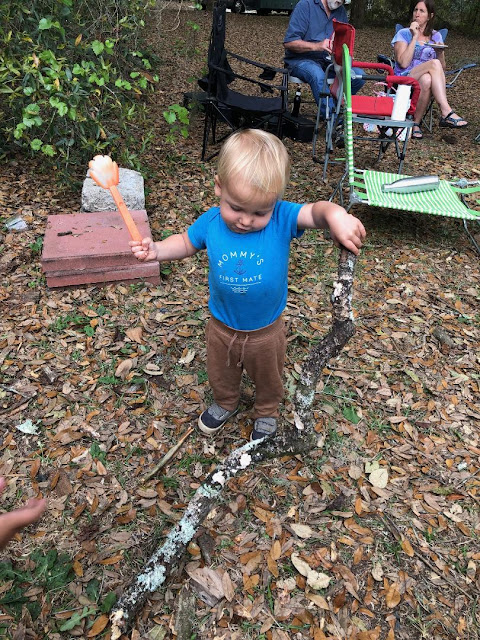 Levon was one-and-change two years ago and he was trying to chop wood for the fire like his Boppy. Already in love with his grandfather then. 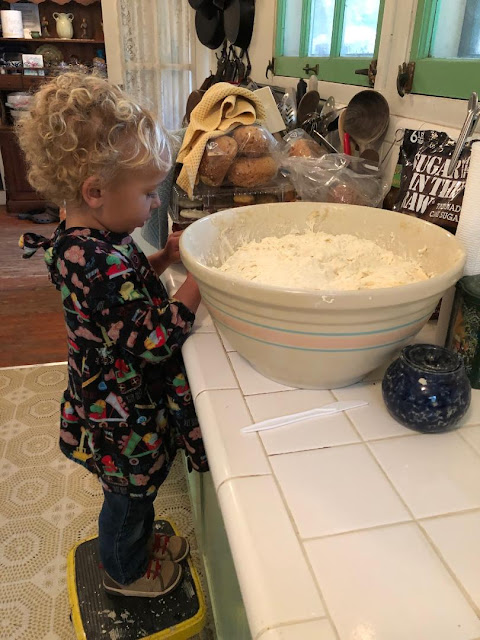 August in the same place in the kitchen, this time helping me make the great batch of angel biscuits I always make on Sunday morning. 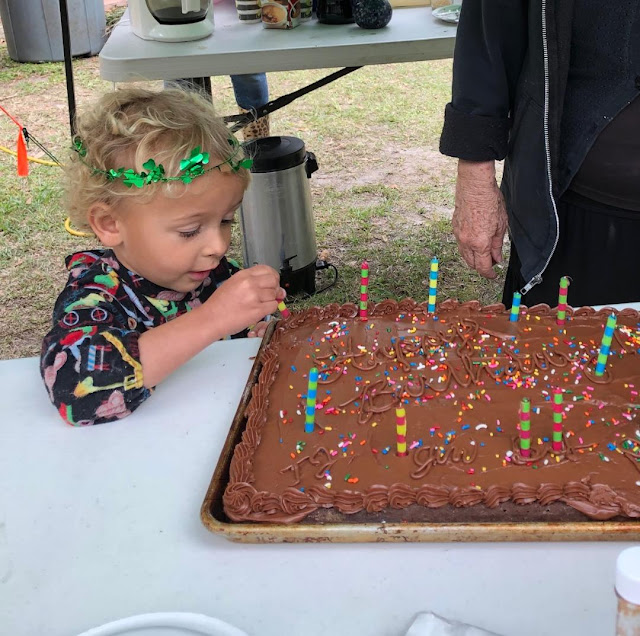 Lis's cake. March is a huge birthday month for the people who come to the Gatorbone party and there is always a cake for them. August was helping with the candles.

How strange to look back on that weekend and realize that we had no idea what was coming. That the idea of a grand gathering of hugs and food laid out on tables and knots of musicians here and there with guitars and fiddles and sleeping in tents close together would be like something from a dream. I miss those people. I love cooking for them, feeding them, because they feed me. They fed me.
Perhaps someday we will feed each other again.

I was planning on going to town tomorrow for my shopping but the weather looks to be terrible so I went today and got it done. The best thing was that I ran into a friend who is working in the pharmacy at Publix whom I haven't seen in forever. It was SO good to see her. We have both had our vaccinations and hugged without restraint. But with masks because, of course.
So I got all my stuff and came home and it is such a gorgeous day here. I walked around the yard and took a few pictures. 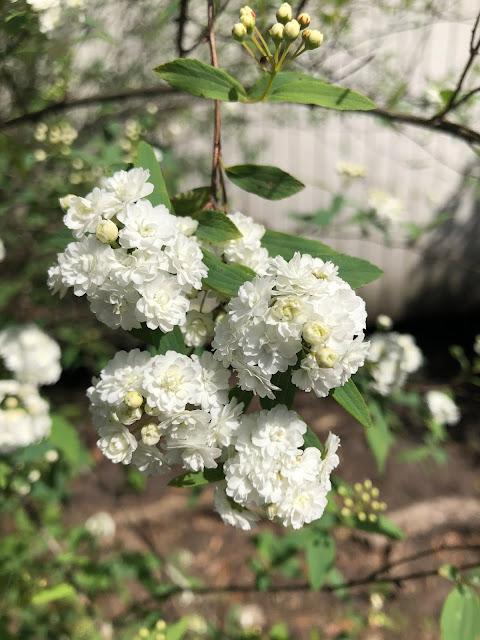 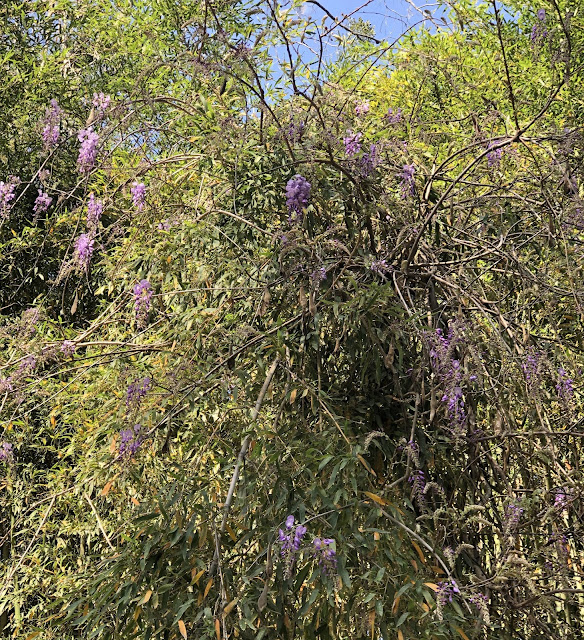 The Wisteria growing in the bamboo forest. 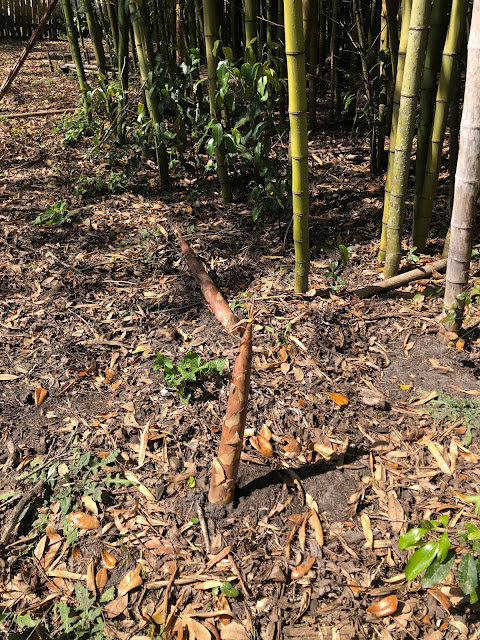 And speaking of bamboo- it is time to kick it. 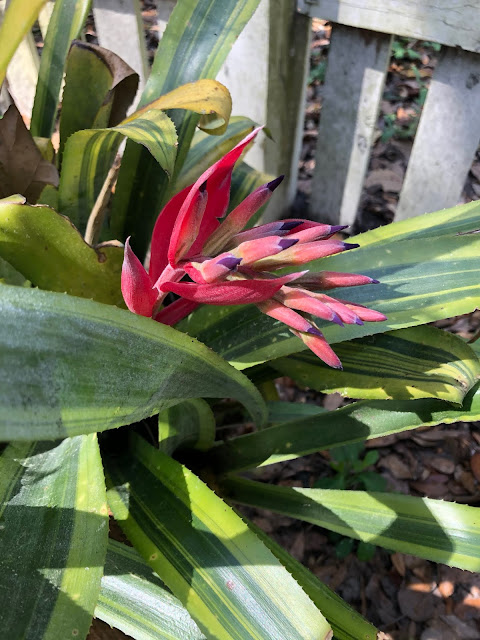 One of the many bromeliads that are blooming in my front yard. This one by Elvis's grave.
I have corned beef simmering and carrots scrubbed and a nice head of just-picked cabbage cored and sliced down its crisp middle. I'll wash up the potatoes here in a minute and make a loaf of soda bread to bake. I've made this same meal at Gatorbone many times although in far greater quantities. 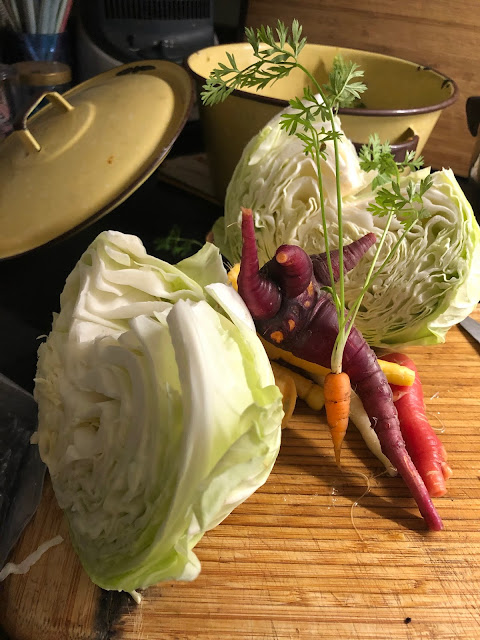 My carrots are still a bit puny and I never know when I pull one what it's going to look like but Mr. Moon doesn't really like cooked carrots and that is plenty for me.
I saw a hummingbird at the feeder yesterday. My heart soared with it.
I think my heart is hungry.
I think we all know that feeling now.
I've ended up reminiscing here anyway. It's okay.
May we soon feed and be fed- tummies, souls, hearts, and minds.
Love...Ms. Moon
Posted by Ms. Moon at 6:21 PM