Flowers And Spinach And Stuff 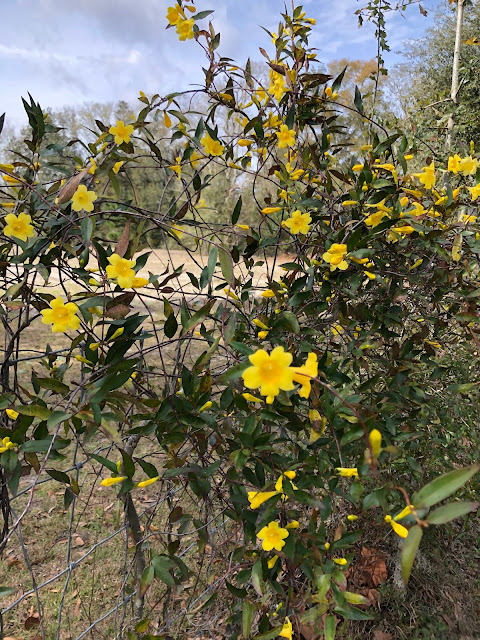 There you go. That's some lovely yellow jessimine (not jasmine) growing on a fence post. It's also called Carolina jessimine and is the state flower of South Carolina. (Hey Jennifer!)
I did take a walk this morning. I took some eggs down to No Man Lord's and although I saw him and waved at him, he just went on in his RV and I left the eggs on a chair in his yard. I always figure that if I leave them there, I've done my job. Pinot was sitting in a different chair in another part of yard and he did acknowledge me and we exchanged greetings. I walked on down the road to El Rancho and saw the great, black cattle in the woods, far back from the fence. They had some sort of huge, heavy machinery on a truck trailer that it looked like they were preparing to use. Levon could have told me exactly what it was.

The house that burned down now has its own RV in the yard. Now when I call these things RV's, I do not mean to say that they are anything that you would or even could take camping, much less glamping. They look like they were abandoned at the Done Forever RV graveyard and left to rot. The one in No Man Lord's yard doesn't even have a functioning roof unless he just likes the look of blue tarps. The one in the burned out yard looks slightly better but I sure wouldn't want to live in it.
Buddha is still keeping watch out front.

While I was walking I noticed that my left foot was hurting but it's been sort of doing that for awhile now. I figured it would stop once I quit walking but it has not and now I'm limping around and wincing. It's the heel area and I've done a quick perusal of the symptoms on the internet and it could be one of a hundred things. The feet are complicated bits of miraculous machinery and it's amazing that we get as much milage out of them as we do. (Haha.)
Whatever.
I have to go to the dentist tomorrow so I won't be taking a walk anyway.

Ms. Martha's mother-in-law's house has a bunch of violets blooming in the front yard. I plucked a few and brought them home and put them in a little bottle. 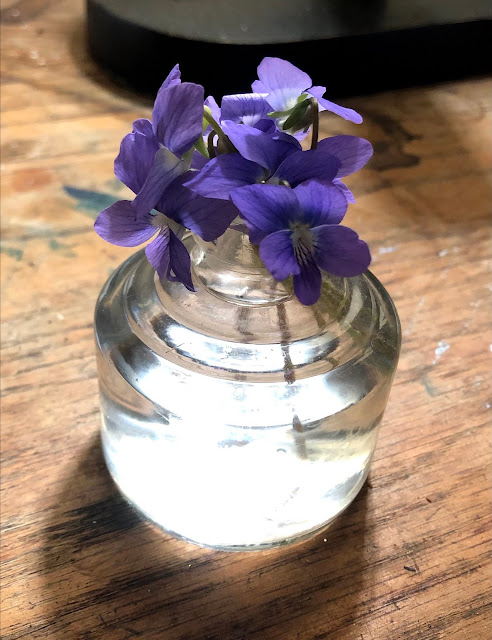 Isn't that just the sweetest? I think I found that bottle in the yard here but I could be wrong. It almost reminds me of an ink bottle. Anyway, I love it.
My hens are still blessing me with their abundance. Their favorite place to lay right now is in a nest they've made on the floor of the hen house. They keep it tidy and neat and free of poop. 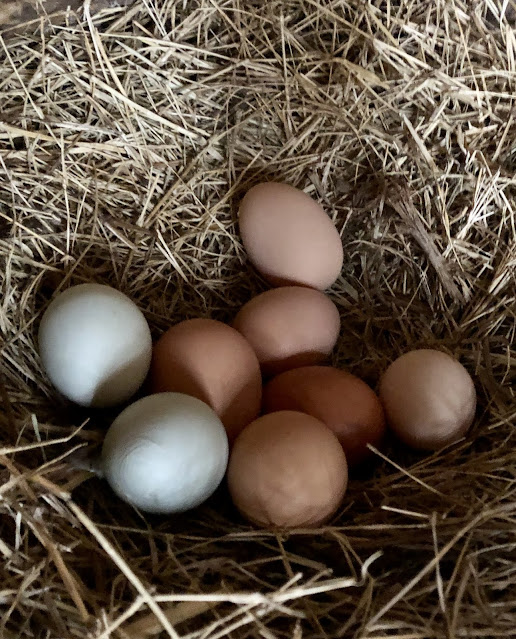 I found four more eggs in different places and I haven't even checked to see if Violet laid an egg in the fern pot on the front porch which is what she's been doing.
The mulberries have changed overnight into this. 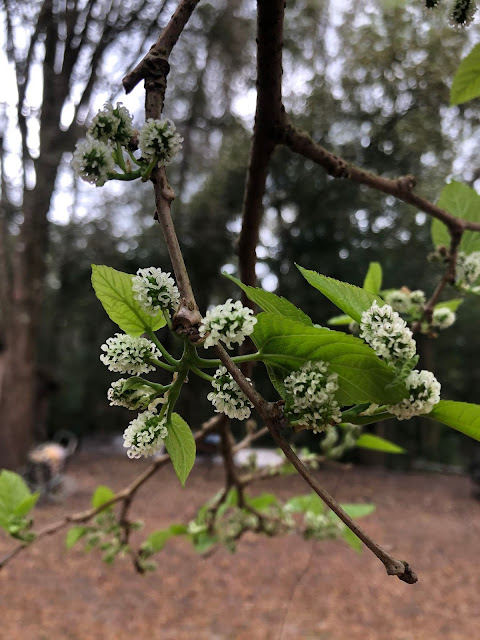 A week ago the tree had barely, barely started to push green out of its little branch wombs. And look there- beginning berries. I want to tell the tree to slow down, honey, but it wouldn't do any good. It's like watching your baby girl put lipstick on for the first time. Wait! I'm not ready!
Spring is just going to happen and that's all there is to it. And it was hot today. When I got back from my walk I turned my turbo-industrial-strength-porch-fan on me but in the last hour it's started really raining and the temperature has dropped eight degrees. The next few days are going to be a little cooler and I sure hope I can take advantage of that and get some more yard work done.
I suppose I've been in a better mood today. I can focus on the pain in my foot instead of my old lady moods. I sat on the couch and embroidered and watched a few episodes of Call the Midwife which was heaven for me. I swear to god- those midwives and nuns and nun-midwives sure can solve a lot of serious problems in forty-five minutes. I've started my supper which is going to involve YET ANOTHER skillet spanakopita. I have to look up that word every single time I write it. We're sort of addicted to that stuff. 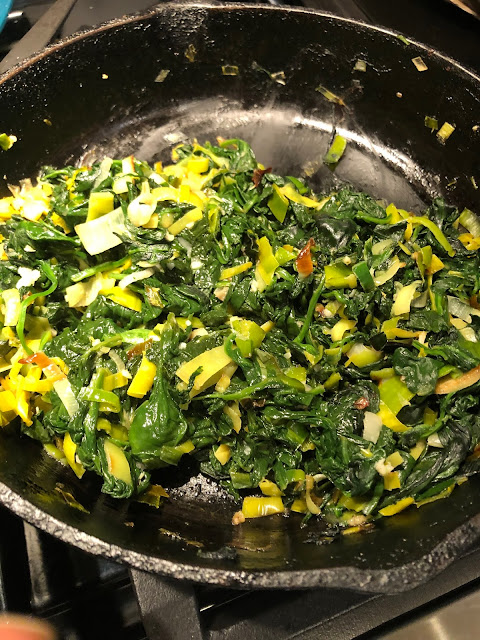 That's the spinach, leeks, and garlic part done. Now I just add the eggs, cheeses, spices, lemon juice and so forth and then make a pie out of it with phyllo and bake it.
I guess I've squeezed all the words out of this day as best I could, not unlike I squeezed the steamed spinach before I put it in with the leeks.
I hope y'all have had a decent Monday. Wish me luck at the dentist.
Oh Lord.
I'm sure it'll be fine. I'm only getting my teeth cleaned. But you know me- I'm still stressing out.
Love...Ms. Moon
Posted by Ms. Moon at 6:22 PM