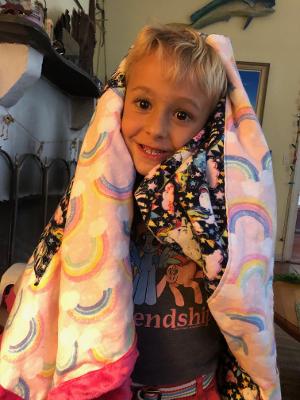 Levon and August came over this morning because Jessie had some things she needed to do and those little guys were so sweet. I made a big pot of oatmeal for their second breakfast with raisins and toasted pecans and honey and they ate with their Boppy. I made up a loaf of sourdough and set it to rise and then I was mostly at their service. I sat on the couch for awhile and finished up August's blanket while the boys were watching two of the most annoying kids' shows I've ever seen in my life. One of the shows, P.J. Masks, kept talking about how these blighted tiny super heroes were going to "save the day" and I told the boys that super heroes have been saving the day since I was a kid. We tend to think that the shows we watched were a lot better and some were pretty great but some were horrible. Do you remember Roy Rogers? I could never figure out how it was that half the time Dale and Roy and the good guys were on horses and the rest of the time they were in Jeeps. And the dang bad guys were always doing something that required the actions of a posse. It made no sense whatsoever.
Still, the cartoon shows we watched were superior and that's just the truth. From Bugs Bunny to Yogi Bear, from the Flintstones to the Jetsons, we had some excellent viewing choices.

Levon went and found the fabric I bought with heavy equipment printed on it and said that I could now make his blanket since August's was done. I told him that I would start working on it later, after they went home which inspired him to ask when they were going home about every five minutes. He didn't really want to go home, he just wanted me to make his blanket. And a pillow. After they left I did wash the material but I have to admit that the sewing machine is still in its case.

Levon helped his Boppy dig some holes to plant tomatoes in. August was not interested in that activity but he did want to look at my make-up and jewelry. I remember how fascinated Owen used to be with my make-up. I do tend to have interesting and sparkly eyeshadow. Not that I ever wear it. Anyway, he picked me out a lovely necklace to wear as well as a pair of earrings and then he wanted me to put eye shadow on. He picked out the colors and I complied. I asked if he wanted some and he said he did and he picked out his colors and I carefully brushed his eye lids with sparkles. 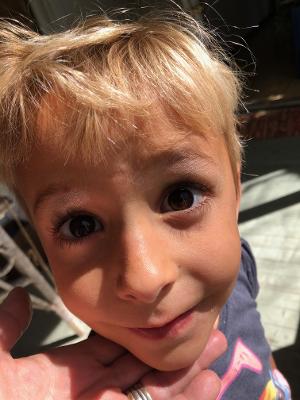 While we were doing these things, we had some nice conversations. I adore talking to kids. They have the most interesting things to say and topics can range all over the map. At one point he asked me how many times I'd been hurt. "Millions?"
No, not millions I told him. We talked about that a little bit and I said that people do get their bodies hurt sometimes but sometimes we get our hearts hurt. I asked him if he'd ever gotten his heart hurt. He asked me what that meant. I tried to explain by saying, "Well, what if you had a really good friend and you asked him if he wanted to play and he said that no, he did not want to play with you. Would that make your heart hurt?"
He considered.
"No," he said.
August is an exceptionally pragmatic child. But we went on to talk about how important it is not to make other people's hearts hurt like by calling them names. He told me he already knew that. I'm sure he does.
When Levon came in, we moved out to the porch swing and each boy brought a stack of favorite books for me to read. What an incredible joy to sit on the porch in this cool-ish weather, reading to my grandchildren beneath the tin roof which is beneath the spreading branches of an ancient oak tree, the sentinel of our front yard. We were still reading when Mama Jessie showed up but August and I finished reading the joke book again which he is fascinated by even though he still doesn't get some of the jokes. He wants to so bad.
He will.
I really cannot tell you how much pleasure it brings me to spend time like that with my babies. I think of Owen and Gibson and how it was when they were very young and came and stayed with me a few times a week while their parents worked. How I would read the same board books over and over to them, how I would rock them on the swing and sing to them until they finally fell asleep.
How incredibly lucky I am to have been able to do that. To spend such sweet time with my grandchildren in my grandmother house.
After they left I finally got around to cleaning up the kitchen and making the bed. My sourdough is just not rising nicely. And I even fed the starter yesterday! I'm going to let it rise all night. I feel as if I've lost my dough juju. The dumplings I made last night were not right. They looked good, they rolled out beautifully, but I could feel that the texture of the dough was just not right. They looked good and tasted fine, it was that damn texture. It was not dumplingish.
Sigh.
There are far worse problems to have. Of this I am aware.
I see that the covid relief bill has been sent to Biden's desk.
It surely is a glorious thing to have a real leader in the White House, and a majority of Democrats in the House and Senate. What will the die-hard Trumpers and conservatives find in this bill to bitch about? I do not know but not one Republican voted for it. Even in the political sense, I don't see how they couldn't. According to one poll, 75% of Americans approve of the bill.
Hateful versus helpful. Hmmm....
Pretty much sums it up.
Love...Ms. Moon