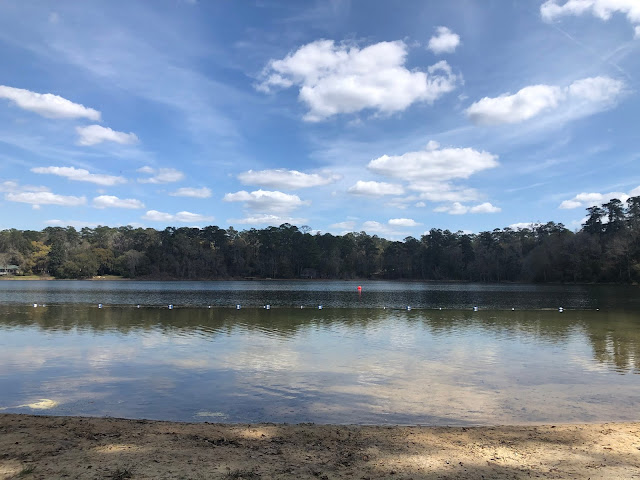 I woke up in the crappiest, crankiest mood this morning. I was hatin' on the world, despite the blooms and blossoms, birdsong and blue sky. I got a text from Jessie asking if I wanted to go to Lake Hall with them and I told her I had to deal with my morning angst before I could make that decision.
She understood.
I knew I wanted to go so I got the laundry going early, did the few things around here that needed doing and got dressed to go to town. I had to pick an outfit that would do for both lake-side relaxing and grocery shopping. I thought I was actually going to get away without having to go to the store this week but I did have a list and also, I had what I hoped were two prescriptions to pick up at Publix's pharmacy so...shopping might as well get done. I put on a blue linen dress and a white linen shirt that I bought at that rather disappointing trip to Goodwill, a pair of blue earrings and a blue necklace.
Pool boy, bring me a pina colada, por favor.
Haha.
Lake Hall is part of the nearby Alfred B. Maclay Gardens State Park which is an absolutely beautiful place, especially right now as the last of the camellias as well as the azaleas are blooming. I mean- it's enchanted and enchanting. When was the last time I was there?
Who the hell knows?
It's like people who live two blocks from the beach and never go.

I used to take my kids to Lake Hall when Hank and May were little, especially the summer I was the World's Largest Living Land Mammal when I was pregnant with Lily. Lake Hall and Wakulla Springs were my go to. It's a wonder Lily wasn't born with webbed toes.
Anyway, Jessie had taken the boys a few weeks ago and no one had been there and the boys had a wonderful time, digging in the sand and even getting in the water. So I joined them today with my beach chair and I gave Levon his blanket. He is delighted with it. I demonstrated how he can look at the heavy machinery while lying under it, having the cozy flannel side next to his body. Thrilling! I hear that August loves his blanket, too and has been trying to show it even to people passing the house on their walks.
And that, of course, thrills me. 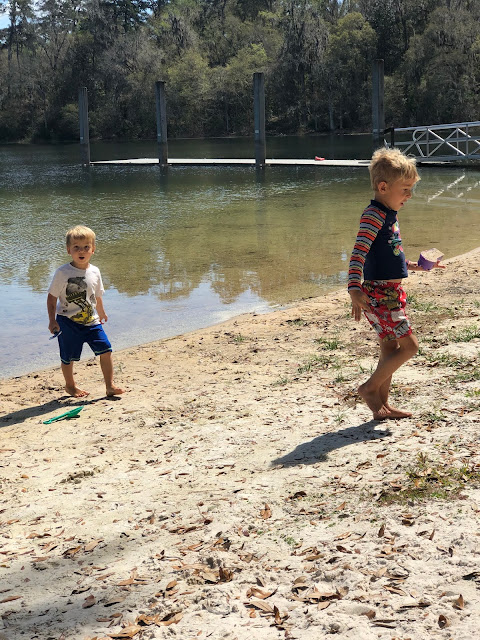 Jessie and I chatted while the boys played in the sand and waded in the water. Levon brought out his front-end loader. Or, one of them. I think that's what it is. I still don't know. 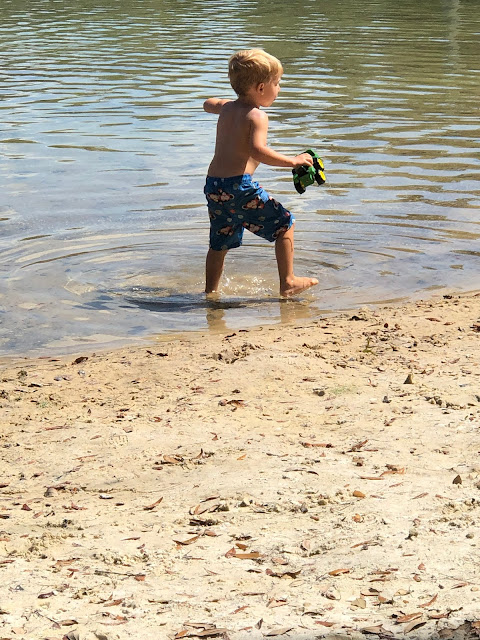 He spent at least fifteen minutes, wading knee deep, crossing and recrossing the little area in front of us holding the front-end loader half submerged in the water beside him, making engine noises as if he were rolling it along the ground. I have never in my life seen a child do this but I am not surprised that Levon did. August designed a way to clean the water by digging a ditch that ended up in a hole on the beach where the "dirty" water collected. He then spent a great deal of time telling us a story about a contest or game wherein people did this on 1700 lakes. There was a lot more to the story. Forgive me if I don't remember. Then Levon found a stick and started using it to whack the front-end loader in the water. Boys and sticks go together like beans and rice.
I finally realized I needed to get on my way and Jessie wanted to get home too so that Levon could get a nap. We packed up and changed the boys out of their swim suits and I did something I never do unless I do, I guess, and went to HARDEE's drive through and got a chicken sandwich and an iced tea. I don't feel guilty about it. How much fast food do I eat? And it was a smallish chicken sandwich and no, I did not get french fries. Or onion rings.
Did I enjoy it?
Sort of. Not sure my belly did though.
I decided to skip Costco and went directly to Publix where only one of my prescriptions was ready and of course that was the one that I'm least in danger of running out of.
Sigh.
I ran through the store in record time and got my stuff, came home, put it away, got the clothes off the line, put all of that away, made the bed with the clean sheets (in case you were wondering if it's Friday or not), unloaded the dishwasher, gathered the eggs, and swept the kitchen floor.
I'm tired now.
Okay. Here's what I feel the need to talk about- people whose new theme about the Biden presidency seems to be "broke and woke." As in, America will soon be broke and woke. In case you didn't get that.
I have a "friend" on FB who agrees with this philosophy (don't worry, I'm unfriending him) and I read through some of the comments on a post about Biden signing the relief bill that he had commented on.
Here's the thing that mystifies me- as pissed off and anxious and angry as I was about Trump being president is exactly how pissed off and anxious and angry these people are about Biden being president. They call him "Sleepy Joe," of course, tell him to go "back to the basement," say that he can't finish an entire sentence due to...dementia? and in general, just absolutely shred him.
First of all, how could anyone who supported Trump criticize Biden's language skills? Thought processes? Trump had the vocabulary of a half-trained cocker spaniel and his sentences were basically three-word affairs, one of the words always being "me" and one of the words generally being "bigly" or something in that vein. Do they not see the irony in criticizing Biden?
And secondly, well- I'll just say it- why is being woke a bad thing? Why is the fact that people want to be more empathetic and aware of the issues of race and class and education and income something to be made fun of?
And finally- do they not realize that under Trump, the national deficit rose over EIGHT TRILLION DOLLARS?
You know what? Even if these Ever-Trumpers do know or did know, they do not give a shit. They are so blind in their cultish, slavish devotion to a man who poops on a golden toilet that they literally do not care what he did nor do they care what Biden will do- they are going to remain loyal to Trump and they are going to condemn and denounce every thing Biden does, even if it makes their lives and the lives of their children and grandchildren remarkably better.
If I should, by some miracle, live to be a hundred years old (and I won't), I will never understand this.
And it confuses the hell out of me.
Mr. Moon has just returned from picking up the tractor from his friend who repaired it. Levon is very excited that the tractor will now run better. He insists that it will also run faster and perhaps it will.
It is martini time. Although I've had a lot of sweetness today, I'm still somehow a little cranky. Perhaps the martini will help with that.
And here's some cheerful news: today is May and Michael's fifth anniversary. Can you believe they've been married for five years? Congratulations to those two sweet lovebirds.
Happy Friday, y'all.
Love...Ms. Moon
Posted by Ms. Moon at 6:39 PM