Neither Genteel Nor Gentle 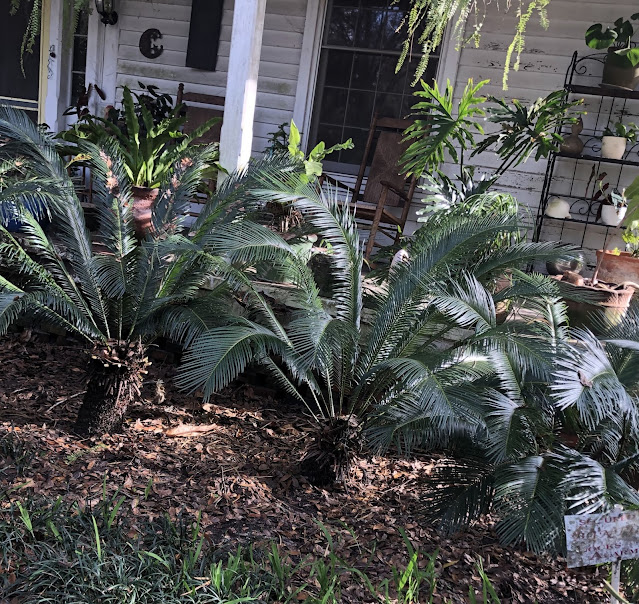 Last night, for no discernible reason, a curtain of sadness descended over me and I just went to bed. I read for several hours and slept and woke up in the same mood. Just...eh. No explanation, no changes, no nothing, everything same-same but a deep melancholy had taken hold and everything today has made me at once deeply sad and also angry. Aging and slowing down, the realization that there are things I never will do before I die, the deaths of people I've loved whom I always thought I'd see again, the news, the contemplation of the willful ignorance of certain people, the stupid book I was listening to, the springing up of invasive plants, my inability to get motivated, to try new things...
On and on and on and on and yet, at the same time, nothing at all. These thoughts weren't causing my sadness or my anger, they were simply part of it; things floating by that my brain grabbed onto to feed on as it ruminated like a great, unhappy shark, hidden in the shadows of the deep sea.

I made the Sunday biscuits and they baked wonderfully in the new oven, the grits were perfect, completely unscorched on the extra-low burner. None of this cheered me. Mr. Moon wanted to go to town to a nursery to buy tomato plants and a few other things and asked me if I wanted to go and I just looked up from the crossword I was doing and shook my head.

I managed to go out to the garden and plant another row of arugula, hoping to get at least a little more time with fresh greens for salad. I still have plenty of beautiful chard and spinach, lettuces and kale, but the arugula is bolting and I can't bear the thought of not having it. No harm in trying to plant more. I dug up many patches of the damn fireweed coming up by the garden gate, wearing long yellow rubber gloves. I hate that shit with a passionate heat like the burning surface of the sun. I put all of the pulled-up plants in an old potting soil bag that will go to the dump.
And then because why not? I got out my pruners and worked in the front yard, trimming back the dead firespike, pulling random baby oak sproutlings, and then moving on to the sagos.
Ay-yi-yi. 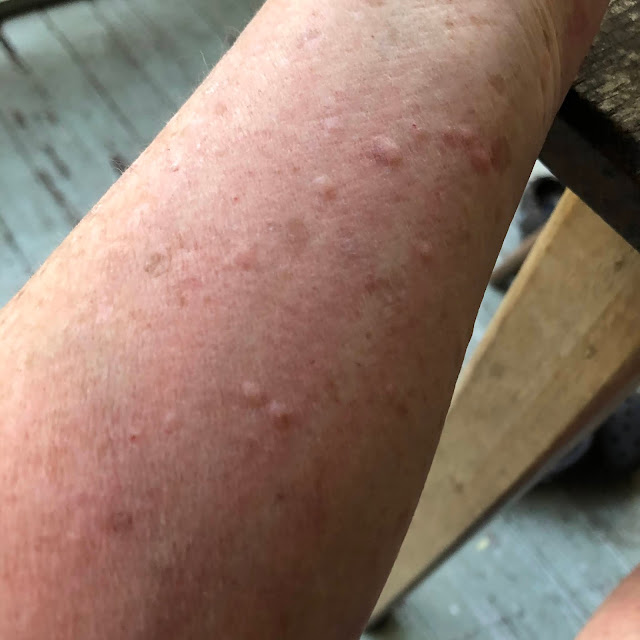 That was over an hour ago.
Now it looks like this. 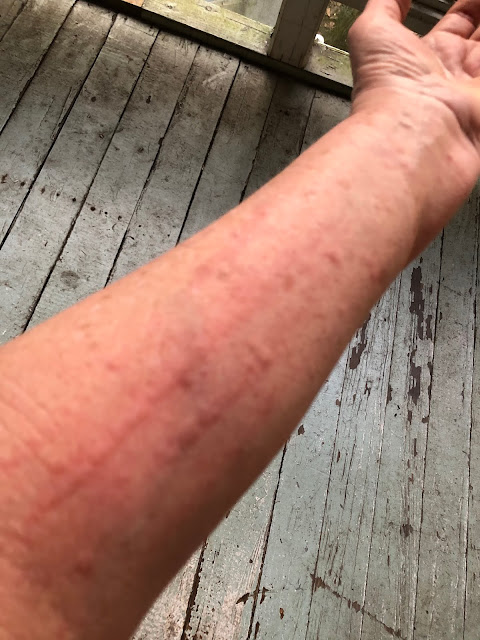 It itches like a motherfucker. Yes, yes, YES! I should have worn long sleeves.
And I've only done half of the damn things and haven't yet started on the date palms. At least I can do those with the long loppers.
I saw Miss Annie (one of the barred rocks) trying to kill Fancy Pants today. They were seriously going at it, jumping and flapping up into the air like two cocks in a pit fight. Fancy Pants' days may be measured around here. He has bloodied one of the gray hens' heads with his beak because he's so small that when he mounts her, he has a hard time staying balanced on her back and has to hold on. It's not unusual for roosters to cause hens to have bare places on their wings where they perch with their talons but this is cruel. I have long since lost my need for every chicken to live and roosters especially are a dime a dozen, even pretty fancy ones. We shall see what happens. I now know, though, that Annie will cut a bitch.
Mr. Moon planted his three Cherokee Purple tomatoes and reports that the gnats and ants tormented him. We have already seen mosquitoes. The ants are coming out in force and I poured boiling water on a swarming bunch of large fire ants coming up between some steps. I have no Buddha in my soul today. These, however, are the type of ants that could literally kill a child if they covered him or her and while Buddha left his wife and son to go sit under the Bodhi tree, I feel certain that the mother of his baby had to deal with any and all of the myriad of threats that may have come her child's way with whatever resources she had. There are people who claim to be able to politely and successfully ask bothersome insects to please relocate their hives and homes but I am not one of them.
I guess I am just Mean Ms. Moon today and that's how it is sometimes. I am quite aware that this meanness comes from pain and although I do not know the source of it (and usually, I do have a clue), I am sure that I will just ride it out and figure it out and work it out.
Eventually.
Meanwhile, red ants and sagos and fireweed and fancy roosters need to watch their step.
Let it be known and so be it.
Love...Ms. Shark-Heart